The methods used to teach law have altered greatly over the centuries, although arguably the biggest change came with the disappearance of ‘readings’ in the late seventeenth century.

Readings were a series of lectures that were given twice a year, one in Lent term and one in Autumn term. Those in the Autumn term took place in August, usually between the first Monday of the month and the 24th (the feast day of St. Bartholomew). Readings originally lasted for about three and a half weeks although this reduced over time. Readings were given by senior barristers, usually benchers, and were designed to give students and barristers instruction as to the best ways to form a legal argument. At Lincoln’s Inn would have taken place in the Old Hall. Readers had help from ‘assistants’ who were usually senior barristers of the same Inn and were often elected to be Readers themselves. Debate would take place over a particular statute or case chosen by the reader who, in order to give him time to prepare, was usually elected six to twelve months before he was expected to give his reading.  Of all the Inns of Court, Lincoln’s Inn can claim both the earliest instance of readings taking place in 1464/5 (as recorded in the Black Books) and the most complete list of readers.

The reason behind the rapid decline and ultimate cessation of readings is not known, although it could have been a result of the increase in production of printed legal texts, changes in legal procedures or the disruption caused by the English Civil War. One interesting idea that has emerged in recent years is that readings eventually disappeared due to the increasingly vast expenses that were incurred by the readers who were expected to host and pay for all the dinners and suppers associated with the readings. Considering the length of readings, even once shortened, they clearly had potential to become costly affairs with a member of Inner Temple breaking off his reading after a week, claiming poverty. An entry dated 13 June 1591 in the Black Books, lists rules concerning the readings. The rules also highlighted that the costs of hosting dinners and drinking following the readings were proving to be prohibitive towards delivery of the readings and had reduced the number of readings that had been given. 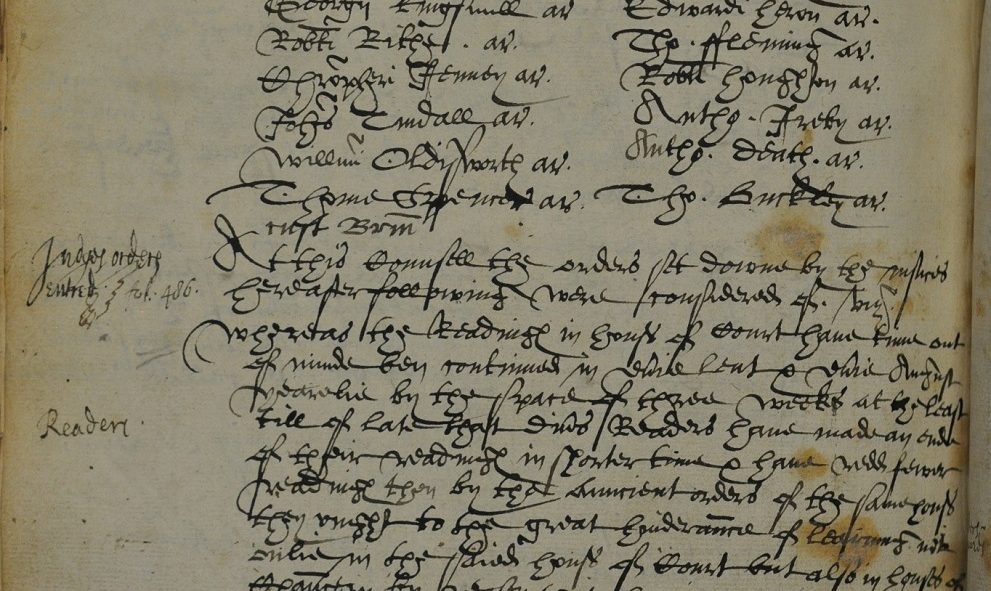 There are numerous references to readings in the Inn’s Black Books and in addition to the educational side, references are also made to accounts and costs associated with the readings, the names of barristers and students who were appointed as stewards at the reading dinners and who were responsible for providing additional entertainment for the reading dinners.

There are various fragmentary surviving written examples of the readings, some of which we are lucky enough to have included as part of the manuscripts and rare books collections held in the Library. A copy of Littleton’s Treatise on Tenures (1588) is heavily annotated with notes of readings that took place between 1586 and 1594 by Richard Seys of Lincoln’s Inn. The image of the title page below shows the signature of Evan Seys, Richard Seys’ son. The other signature is that of a T. E. Tomlins who owned the same book some time later in 1836. 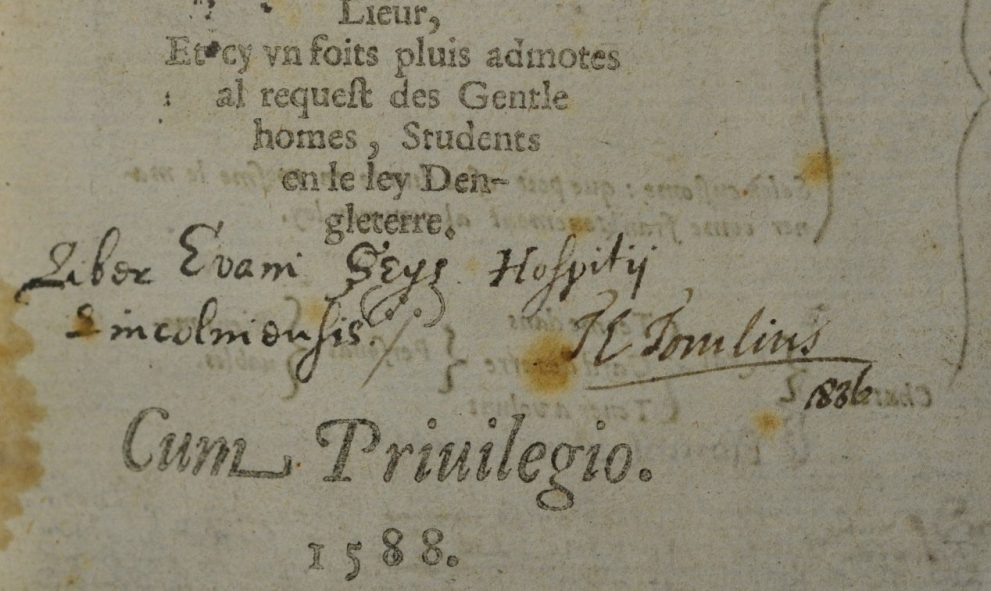 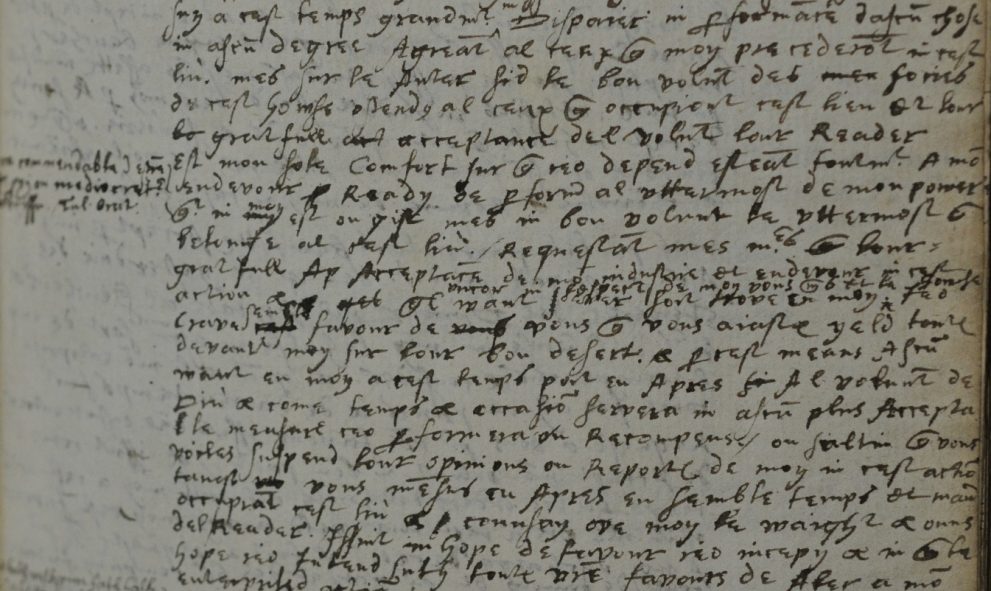 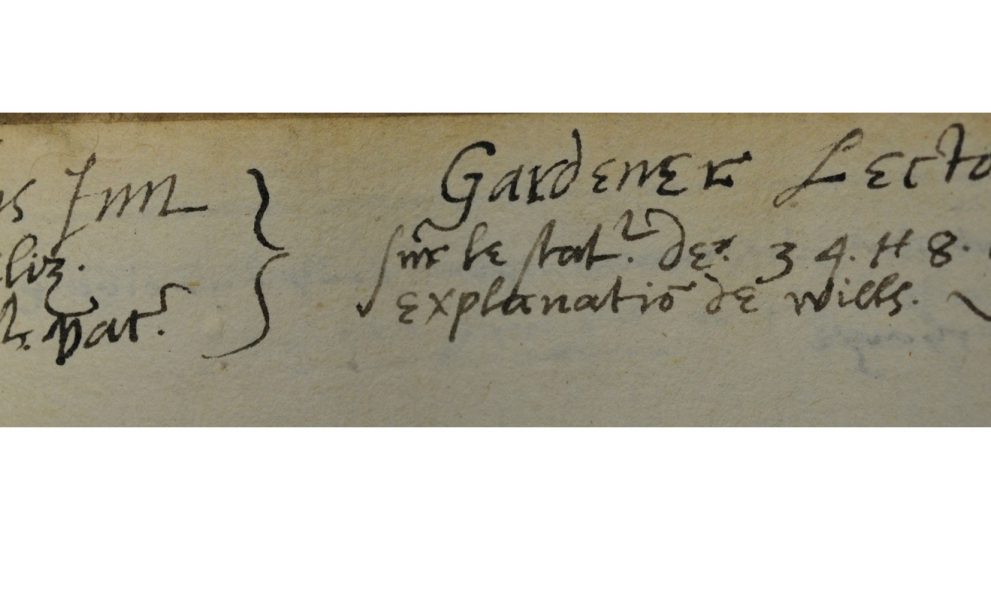 However, not everyone appointed as a Reader took their duty seriously and the Black Books for October 1627 note that Edward Colfer did not attend the Autumn reading of 1627. Following his non attendance at the readings he was to be fined £10 and failing payment he would be expelled. Colfer later had his chambers seized following non residence due to his support for the monarchy during the civil war. 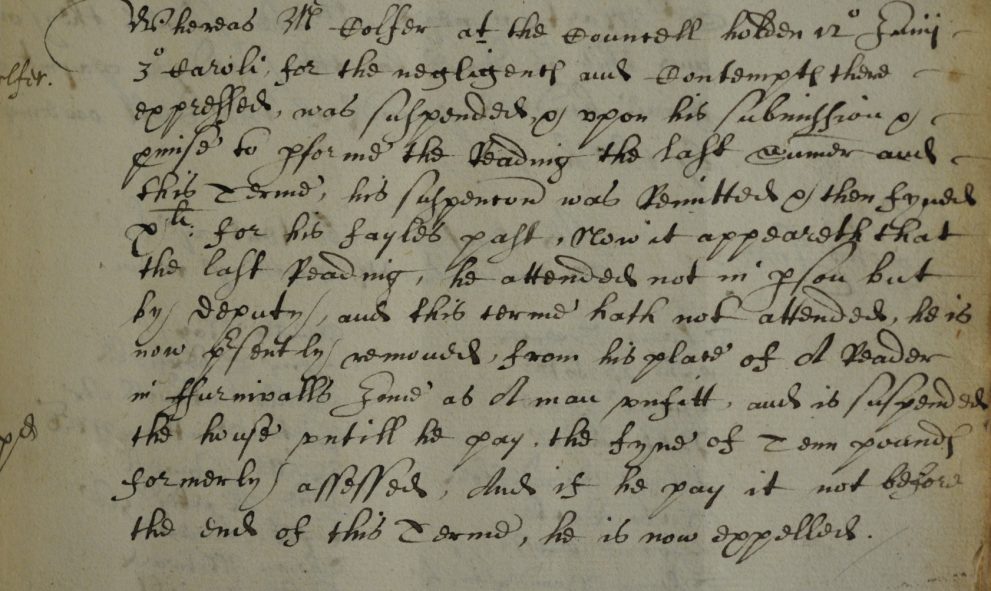 Very few of the readings were published although we have a printed copy in the Library of a Lent reading given by Sir Robert Holborne in 1642. This reading is interesting in that it was the penultimate reading given at the Inn before the outbreak of the English Civil War and was the fifth last reading given in Lincoln’s Inn (the last being given by Thomas Powys in Autumn term 1667). Below is the title page of Holborne’s printed reading and his entry from the Black Books showing his election as Reader in 1642. 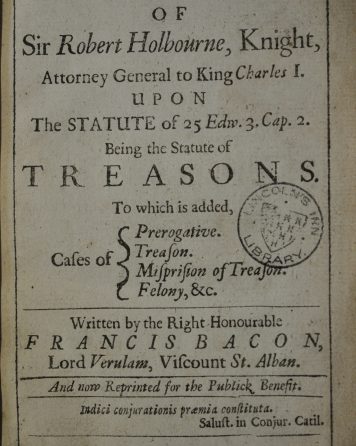