The 17 May 1636 marks 380 years since Mathew Hale was called to the Bar by Lincoln’s Inn. Hale was admitted to Lincoln’s Inn on 8 November 1628 having previously attended Magdalen Hall (now Hertford College), Oxford and is listed as being of Alderley in Gloucestershire.

He was later made a bencher of the Inn on 16 November 1642 on the same day as William Prynne and Richard Raynsford and Wadham Wyndham, two of Hale’s fellow ‘Fire Judges’ who sat in the ‘Fire Court’ which was devised by Hale and dealt with issues and disputes arising from the reconstruction of the City of London following the Great Fire of London in September 1666. His involvement with this will be studied more closely in the September edition of the Archive of the Month which will look at the effects of the Great Fire of London on Lincoln’s Inn, its members and premises.

Hale’s father, Robert, was also a member of the Inn, admitted in 1584 and called in 1594, but died when Matthew was only five.  He therefore did not sign his son’s entry in the admission register as a manucaptor (or guarantor) as was often the case with father and son members.  In fact the entry in the admission register (below, ref no: B1a6) has the name of only one manucaptor, instead of the usual two, that of Humfrey Chambers.  Chambers is also listed as being from Gloucestershire so it is easy to imagine Hale knew him before coming to the Inn.  The admission of Robert and then Matthew was only the start of a long connection of the Hale family with Lincoln’s Inn – representatives of a further successive eleven generations, through to the twentieth century, were members. 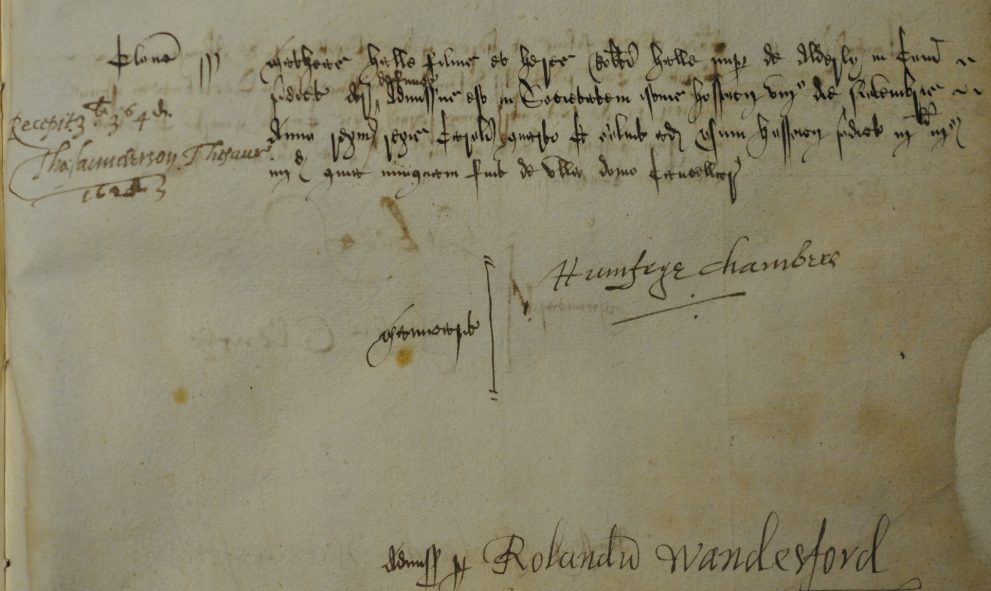 The majority of the remaining entries in the Archives relating to Hale follow two main themes: arrangements concerning his lease of chambers in the Inn and the significant donation of manuscripts that he bequeathed to the Inn.

Hale is listed on 18 May 1629 as occupying part of chambers in Garden Court on the third staircase. As described in the March 2016 edition of the Archive of the Month, Garden Court was demolished in the nineteenth century to make way for the construction of 10-12 Old Square. However, it appears that there was a Hale family connection with chambers in Garden Court with three of Hale’s sons (Robert, Mathew and Thomas) taking up residence there when they too became members of the Inn. The information about Mathew Hale’s connection to Garden Court is recorded in the first volume of the Inn’s ‘Red Books’ (ref no: E1a1) which record details of tenancies, repairs and improvements to the Inn’s properties. Below is an entry from this volume dated 6 February 1662 showing Hale’s sons Robert and Mathew moving into chambers made vacant ‘by the remove of my Lord Chief Baron, their father’. Hale, having been appointed a justice of the Court of Common Pleas in 1654, was appointed Chief Baron of the Court of Exchequer in 1660, and was to be appointed Chief Justice of the King’s Bench in 1671. 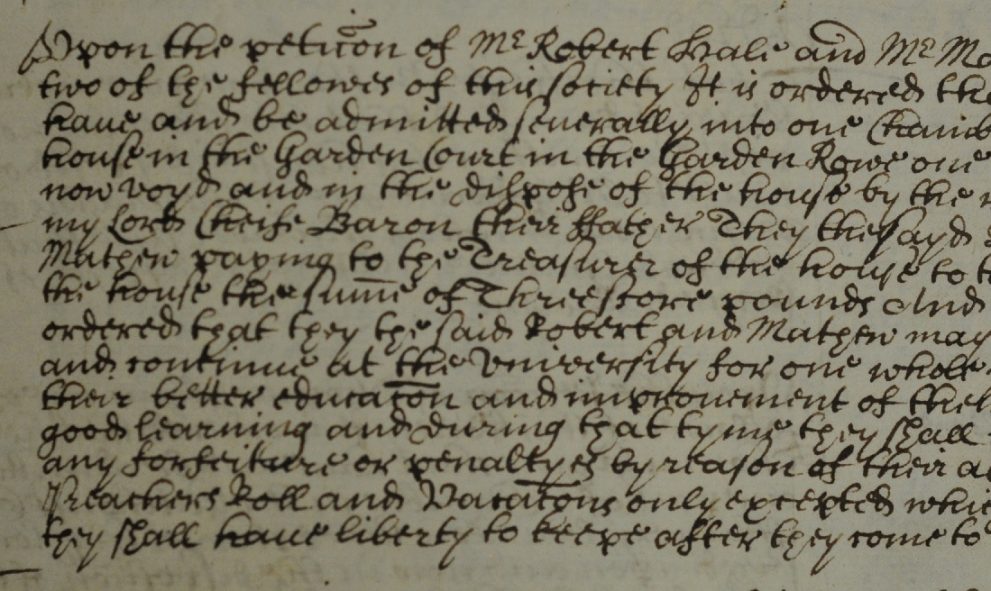 Hale’s donation of his manuscripts to the Inn is undoubtedly one of the most significant gifts made to the Library and entries relating to this bequest are the root of many references to him in the Inn’s Archives. The collection reflects Hale’s broad scholarly interests and in addition to numerous legal related items, there are also manuscripts relating to science, mathematics, music, poetry and cartularies of Battle and Bath Abbeys and Durham Cathedral. Some important volumes of historical material collected by John Selden also found their way into the collection as Hale was Selden’s executor (the rest of Selden’s papers being deposited in the Bodleian Library in Oxford). The image below is from Hale MS105, an astrological manuscript, showing the ‘different orbits of Mercury’. The small holes on and near the rings of orbit are most likely from the point of a compass used by a previous owner (possibly even Hale himself) when carrying out mathematical queries. 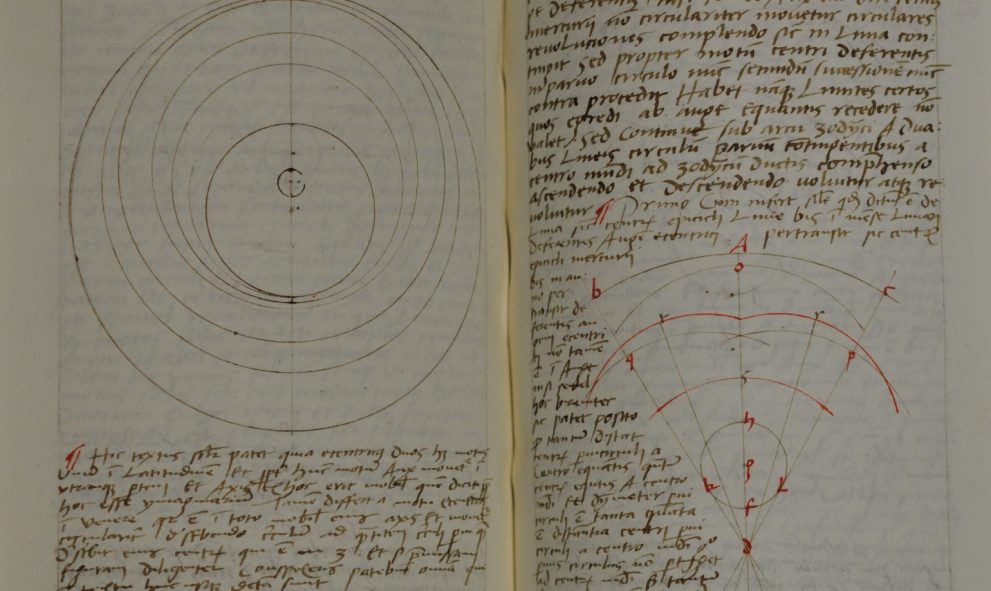 Something that was not included as part of Hale’s bequest were his own personal papers which appear to be scattered over several Archive repositories, the most significant deposits being at Gloucestershire Archives (as part of the wider family and estate collection for the Hale family of Alderley) and Lambeth Palace Library. Similarly Hale does not seem to have given any of his published works to the Inn, though the Library has copies of most of them. There is, however, an entry from the Black Books dated 19 May 1681 that shows William Shrewsbury, who first published Hale’s works in the late 1670s, presented one of them to the Inn. Unfortunately the volume is not specified, and the books themselves carry no obvious signs, so we are unable to say which one it might have been. Coincidentally, an entry in the apprenticeship registers in the Stationers’ Company Archives shows William Shrewsbury being apprenticed aged fourteen in 1655 and was listed as being from Wortley, Gloucestershire, less than a mile from Alderley, where Hale was from. As with Humfrey Chambers, it is highly likely Hale knew Shrewsbury from home.

Further to his chambers in Lincoln’s inn, Hale also lived in Acton (now in West London) and it is presumably to his house there that on 12 February 1677, the Butler and Samuel Eyre, one of the benchers, were ordered to go to collect the manuscripts he had left to the Inn. This mission may not have been successful as there was a further order in May for the collection of the manuscripts from Lady Hale.  At any rate as Hale had died on Christmas Day 1676 they appear to have reached the Inn relatively swiftly, notwithstanding a law suit about his estate, as on 15 June 1677  the Treasurer is ordered that he ‘doe with all speed, safety and beauty prepare archives’ [i.e. presses or bookcases] for the books. At the same meeting of Council a picture of Hale, the three-quarters length portrait below still in the Inn’s possession, was ordered be hung in the Library – undoubtedly a fitting location. Of further interest, and indeed in themselves a rare survival, are the judicial robes in which Hale is depicted in his portrait that are now in the Gloucester Life Museum. They are of wool with ermine cuffs and from the collar to the base of the fabric measure about 150cm, giving indication of Hale’s stature. A photograph of the robes can be seen below.

Along with the various terms on which his manuscripts were to be stored and accessed at the Inn, Hale also individually listed many of the most important manuscripts in his will. However, on 22 November 1677 the Inn asked Luke Astry (a Bencher of the Inn) and Samuel Eyre to compile a catalogue of the manuscripts, although unfortunately this catalogue, if indeed it was created, no longer survives in the Library or Archives. In February the following year it was agreed at Council to rebind some of the volumes and payments were made made to bookbinders for that same work in June that year. In 1733 a further order was made that ‘Mr Auditor Hartley be desired to imploy a proper person to make a catalogue’.  This catalogue does not seem to survive either.  Moreover, it is not clear why it was ordered since a catalogue had appeared in print, published with other catalogues of manuscripts, in 1697. It is the 1697 catalogue that is at the root of a confusion that, until the investigations of D.E.C. Yale published in 1976, long caused problems for scholars  – namely the fact that all the manuscripts in the Library’s possession at that date, not only those from Hale’s bequest, became known and numbered as ‘Hale’ manuscripts. There is no doubt, however, that in Hale’s own words the collection is a ‘Treasure worth having and keeping’.