Fans of classic literature may be aware of the role played by Lincoln’s Inn within Charles Dickens’ Bleak House. Published as a serial through 1852-3, the tale revolves around an extended inheritance dispute, Jarndyce v. Jarndyce.

The novel is brimming with legal professionals and law cases, and inevitably Chancery Lane and the Inns of Court also feature heavily.

The book begins as follows:

The “hall” featured was what we now call the Old Hall which hosted the Lord Chancellor’s Court from 1733 until the opening of the Royal Courts of Justice in 1882.

The fog was not only an unpleasant fact of life in C19th London, it also serves as a metaphor for the procedures of the Court of Chancery. Although originally a more flexible body than Common Law Courts, Chancery was criticised for its delays and expense long before Dickens began writing. His narrator introduces the Court as “most pestilent of hoary sinners”, clearly signifying the author’s opinion and the extent of the problem in his lifetime.

There is debate over the precise setting of the novel. A reference to the railways suggests the 1830s, although the model for the Lord Chancellor who presides over the Court in Lincoln’s Inn Hall is considered to be Lord Eldon.

Eldon presided over the Court of Chancery between 1801 and 1827 (with a brief break in 1806-07 during Lord Grenville’s Ministry of All the Talents).

Eldon’s historical reputation is mixed. He is regarded as one of the key figures in the development of equity jurisprudence and celebrated for his learning and impartiality.  In his lifetime he was widely castigated for his delay in reaching a judgment and dubbed “Lord Endless” by Jeremey Bentham. While this was partly attributable to the increasing workload of the Chancellor with the addition of Irish appeals following the Act of Union with Ireland in 1800, Eldon was nonetheless resistant to the demands for reform of Chancery procedure.

Dickens had personal reasons for lambasting the Court of Chancery, as some years earlier, he sued a number of publishers for plagiarism and, although he won the case, he was forced to spend more in costs than he secured in damages.

Although an Act of Parliament in 1852, the same year as the serialisation of Bleak House, began the reform of the Court of Chancery through the introduction of salaries and abolition of a number of expenses and offices, the value of Dickens’ commentary was not undermined. It highlighted the faults of the system and the lives destroyed by it, ensuring the efficiency of the reforms, whilst also preserving a fascinating insight into the inefficiencies of the Victorian Court of Chancery for the modern reader.

In 1983, the BBC took advantage of the Inn’s role in Bleak House by requesting to film a dramatization of the novel in our grounds. Starring Denholm Elliot as Jarndyce and Charlotte Rampling as Lady Deadlock, the production is still available on DVD. Our archive also retains correspondence (File ref: C3c16/8) detailing the arrangement of the filming process, as well as some production photographs, which were given to the Inn by the BBC as a keepsake.

In his initial letter on 15 June 1983, Jeremy Silberston, Production Manager, stressed how “the Inn and the Old Hall are very important aspects of Dickens’ novel.”  The filming involved a team of artists and production staff of 80, with around 200 extras for one scene.

The production designer Tim Harvey, was responsible for bringing “some scenery to re-create chancery in the Old Hall”. As can be seen in the production photographs, this was something of an understatement.

The production photographs contain a pleasing mix of familiar Lincoln’s Inn figures and some of the country’s finest character actors. Here we see Philip Franks (second from left), who assumed the role of Richard Carstone and, on the extreme right Sir Robert Megarry. 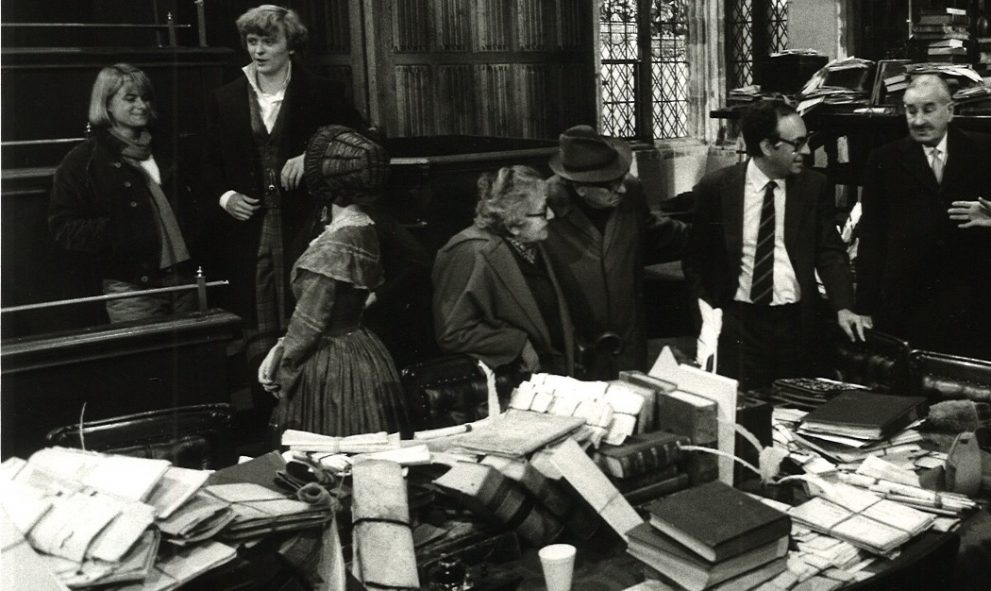 That splendid actor Graham Crowden appeared as the Lord Chancellor. 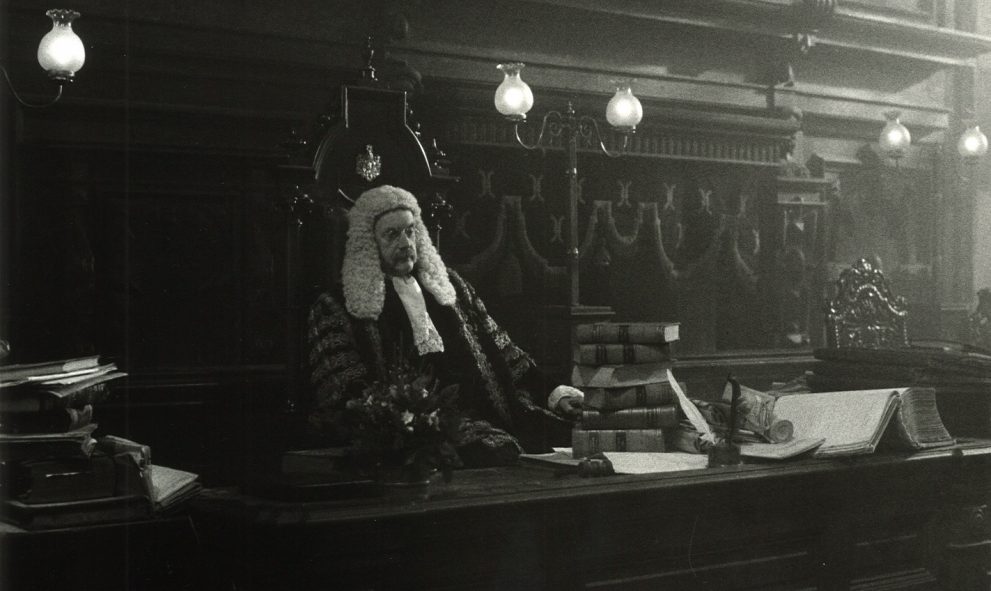 Our archive also includes records of a formal dinner on 4th December 2012 commemorating the 200th anniversary of the birth of Charles Dickens. For this occasion, Library Assistant Hannah Ball produced the map shown below of the Inn and the surrounding area marked with locations mentioned in Dickens’ novels and matched with an illustration from the time. 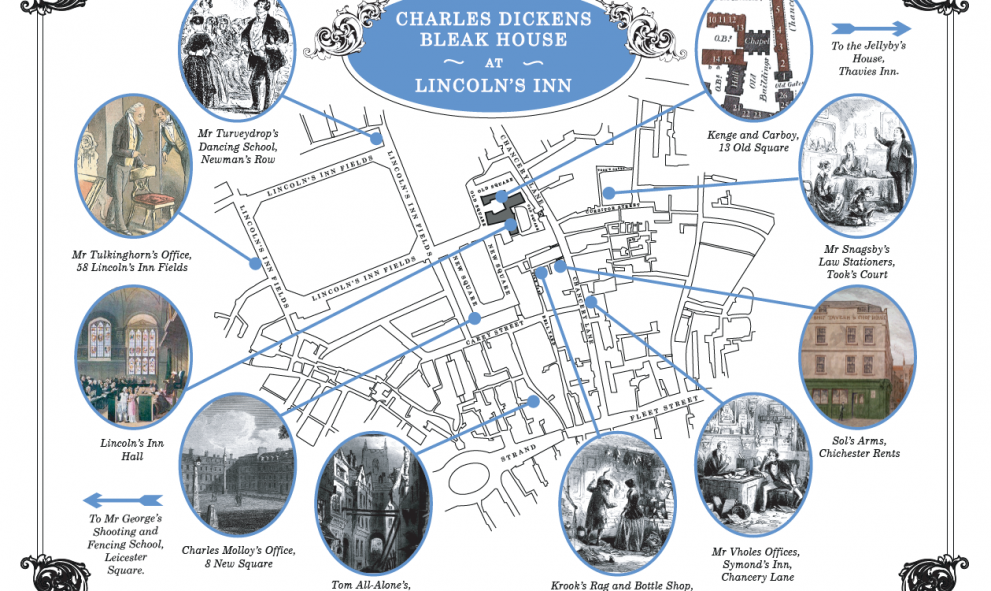 You can see from the map that Dickens’ characters visited Chancery Lane in novels other than Bleak House. The prevalence of legal practice in his works is not coincidence since the young Charles worked as a solicitor’s clerk before becoming a member of Middle Temple. He was admitted as a student in Dec 1839, as can be seen in their digitised admission registers, and petitioned to withdraw 16 years later in 1855 to concentrate on his writing.

For more information about the author’s legal training and attitude towards contemporary law, see David Parker’s article Dickens, the Inns of Court, and the Inns of Chancery.