You may have noticed, as you go about your business in the Inn, dates and letters either carved into the stonework or on small plaques attached to the buildings.   There are about 34 dotted throughout the Inn but most are so unobtrusive and unadorned that one hardly notices them.  They are usually in the form of a triangle with the letter “T” above a set of initials and a date.  The “T” stands for Treasurer with his initials and year of office inscribed underneath.  Their purpose is to mark when work has been carried out on the building and have, due to their form, become known as “Treasurer’s plaques”.

Despite being a seemingly integral part of the Inn’s fabric, their origin and history are lost in the mists of time.  They first appear in the Inns of Court in the latter half of the seventeenth century with Middle Temple boasting the earliest one (1677).  There is an interesting example that can be found above the entrance to the Hall of Staple Inn, a former Inn of Chancery, where the “T “has been substituted with “P” for Principal.  It has always been commonplace for builders to put their initials and the date on their buildings so perhaps this tradition is merely an extension of that practice.

Although our records remain silent as to the origin of these plaques, the Black Books do shed light on our two earliest ones sited in New Square, which are concerned with the development of the square by a member of the Inn named Henry Serle.  In 1682 an agreement with him was entered into by the Inn for the erection of buildings in Fickett’s Fields to be called Serle’s Court on land owned by Serle.  These buildings formed most of what was later to become known as New Square.  On the wall of no. 11, at first floor level to the left of the entrance, there is a plaque inscribed in Latin dated 1691 with the initials H L for Henry Long, the Treasurer, and a lion rampant, the arms then used by the Inn. 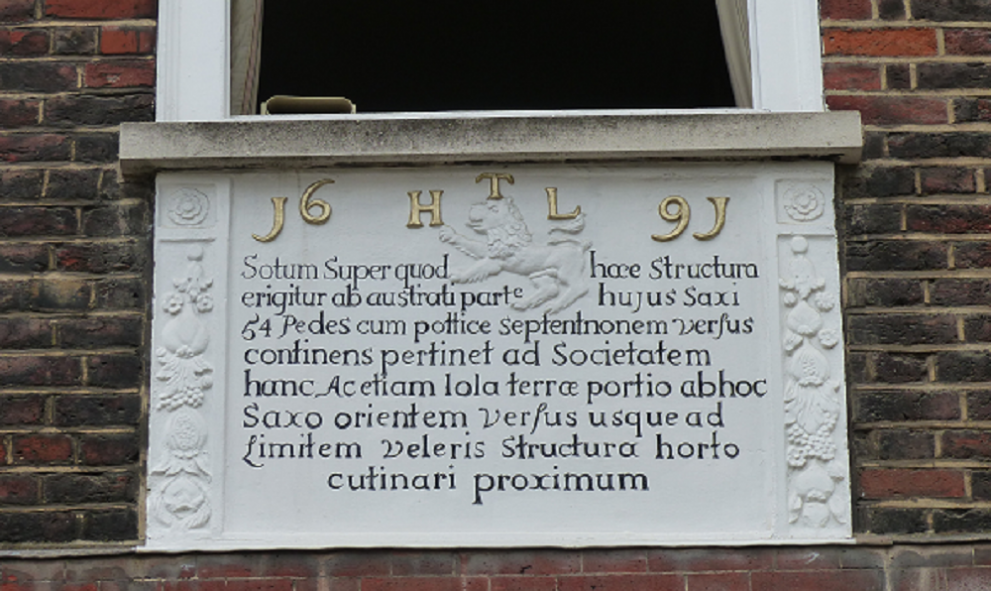 It reads “The ground on which this building is erected belongs to this Society unbroken for 54 feet 1 inch northwards from the southern edge of this stone and also all that piece of ground eastward from this stone as far as the boundary of the old building nearest to the kitchen garden”.  It records the boundary between the Inn’s land and that belonging to Serle stating that the boundary ran across the square eastwards to what is now the north wall of no. 1 New Square.  This was important at the time as Henry Serle had recently died and the Inn was negotiating with his successors over the future of the building agreement.  One of these gentlemen was Dr Nicholas Barbon who, amongst other things, was an aggressive property speculator seeking his own advancement and wealth. 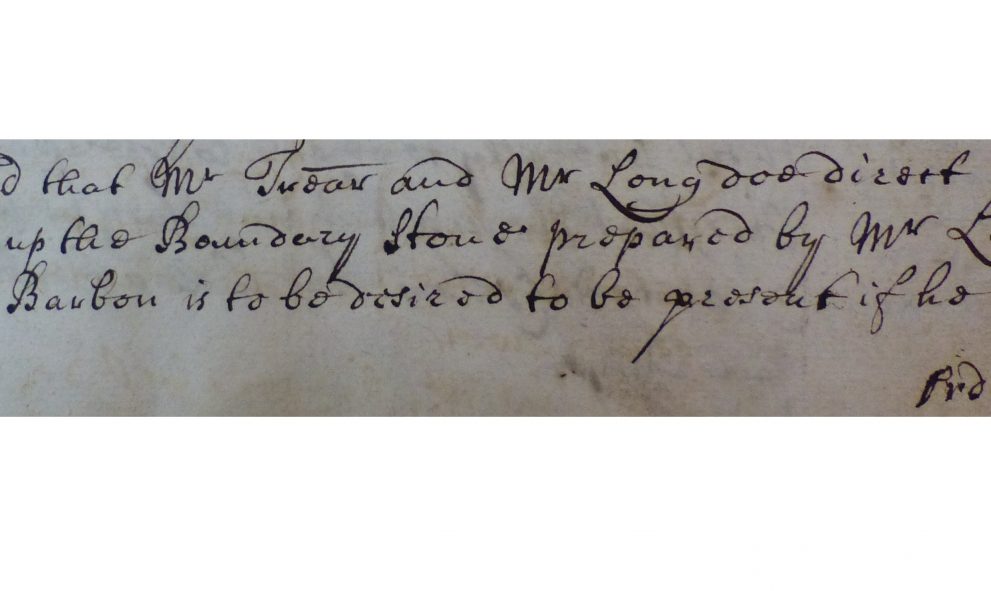 It is not surprising that Council in February 1692 ordered that “Mr Treasurer and Mr Long doe direct the setting up the Boundary Stone prepared by Mr Long, and Dr Barbon is to be desired to be present if he think fitt”. The Treasurer mentioned is Nicholas Martyn, the Treasurer for 1692, and “Mr Long” is Henry Long, the previous Treasurer whose initials appear on the plaque, as he was responsible for its creation.

The other plaque can be seen on the northern wall of 1 New Square and was put up in 1693 during the Treasurership of John Greene.  It states that no windows are to be put in that wall without permission. 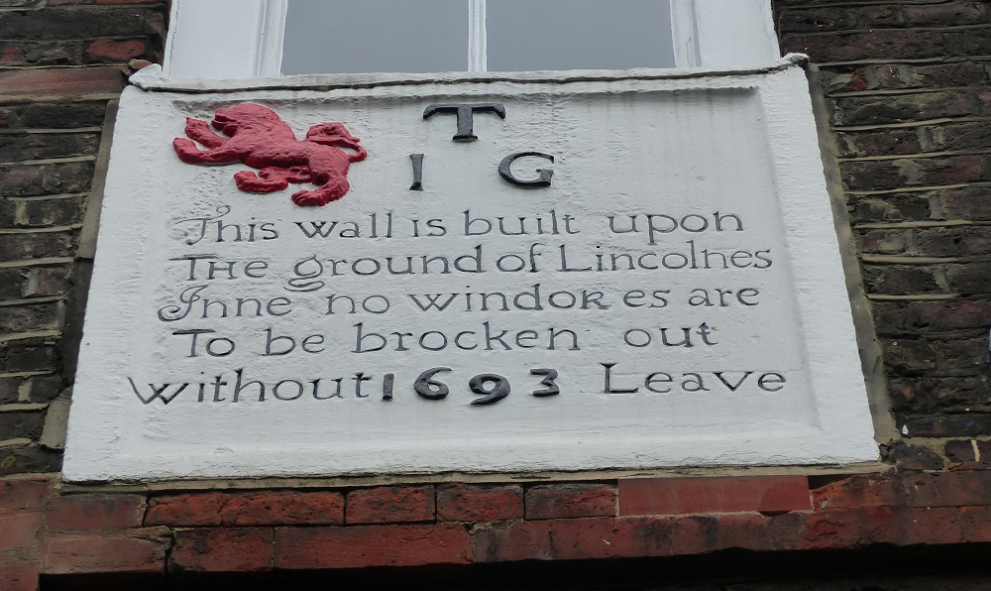 At first glance one may assume that this is concerned with the window tax especially as there are bricked up windows surrounding it, but it is more likely to do with rights to light.  The Inn was probably seeking to prevent the then freehold owners from acquiring rights of light or ancient lights over the kitchen garden that abutted the wall.  The Black Books record one instance of leave being given when in 1717 one of the Benchers, Francis Wilkinson, was allowed to do so. 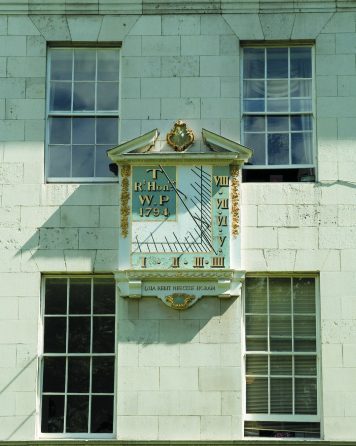 Perhaps the most colourful of these building adornments is the sundial high on the wall of 4 Stone Buildings, overlooking the north garden, which displays the initials of William Pitt.  His monogram appears as the sundial was repainted in 1784, the year he was Treasurer.  The dial was moved to its present site when the building to which it was previously attached was demolished during the late nineteenth century rebuilding of Old Square.  This location was chosen as Pitt had been in chambers in the building’s attic when it was newly built in 1780.

Not all Treasurer’s plaques are to be found outside.  There is one in the library, for instance, put up above the enquiry desk in 2010 to mark the installation of new lighting and the repair of the ironwork in the library walkways.  Even small objects with a relatively short life span such as prayer books, napkins or place mats get the monogram treatment, while monograms on the backs of the chairs in the Old Hall, record its restoration in the early 1990s.

There are also instances of monograms outside the Inn.  Henry Penton’s monogram (Treasurer 1700) being put on a piece of silver along with the Society’s coat of arms given to Rev Dr Edward Maynard on his retirement from the office of Preacher.  Finally, a garden in St Alban’s contains an impressive stone arch, bearing the monogram of Marmaduke Alington, Treasurer 1737.  This used to form the entrance to the Chapel, prior to its enlargement in the 1880s.  William Longmire, the builder employed on this project was permitted to remove this, thus acquiring a unique garden ornament. 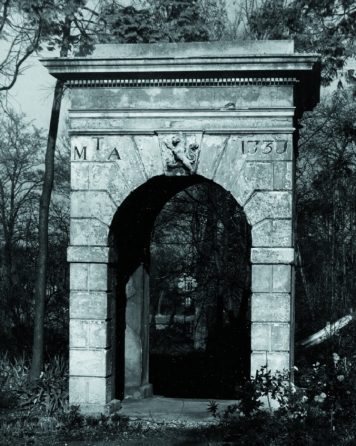