Over 10 years ago, two Lord Chancellor’s purses were discovered in the previous Archive strongroom.

They were mounted in wooden frames and wrapped in brown paper, annotated simply as ‘Lord Chancellor’s Purses.’  There was no accompanying documentation, and no trace of their acquisition in the records. 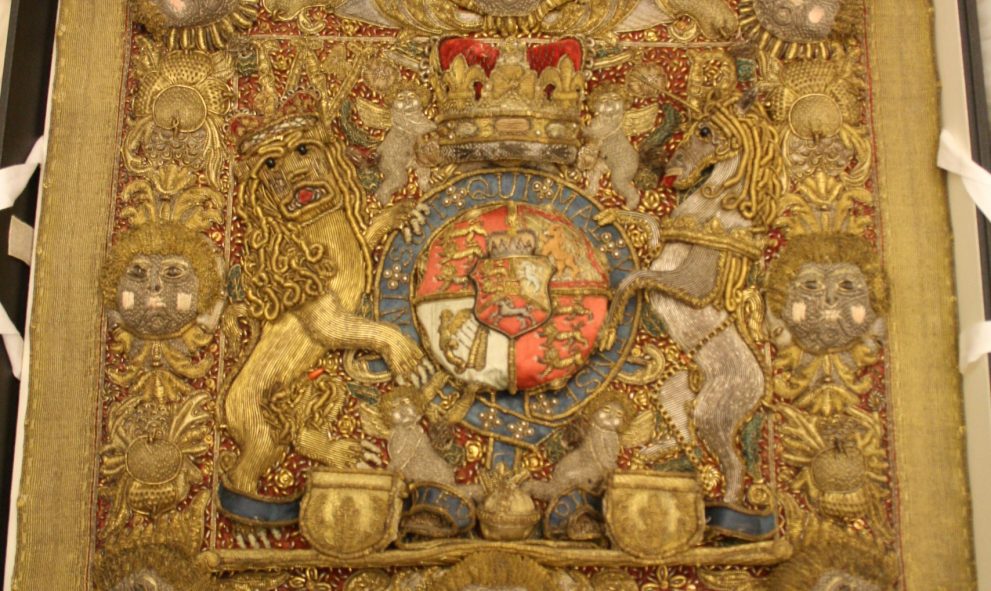 The Lord Chancellor’s purse has long held a traditional role in the State Opening of Parliament. Today, the Lord Chancellor carries the Queen’s speech in the purse, as part of the opening procession. These richly decorated purses (or burses, as they are also known), were originally designed to carry the monarch’s Great Seal. The safe-keeping of the seal was the responsibility of the Keeper of the Great Seal, an office which was later incorporated into the role of Lord Chancellor.

The Great Seal was attached to all major documents of state, and was therefore the ultimate symbol of royal authority. The use of a special purse to hold the seal, can be traced as far back to the reign of Edward II (1284-1327). The seal was carried in procession, before the Lord Chancellor, in a purse made of white leather or linen. By the end of the sixteenth century, the style of the purse had evolved into a highly decorated, professional, work of embroidery.

These purses were replaced annually, with it being part of the ‘perquisite’ or ‘perk’ of office that the Lord Chancellor and Keeper of the Great Seal was allowed to keep the fragments of the old seal and the accompanying purse. Portraits of Lord Chancellors, from the Tudor period onwards, often depict them with their purse, as a symbol of their office. An example exists in the Inn’s collection, in a portrait of Philip Yorke, 1st Earl of Hardwick (1690-1764), as Lord Chancellor.

A sense of the degree of responsibility connected with the role, is reflected in the case, involving Thomas Sadler, William Johnson and Thomas Renninger, which was heard at the Old Bailey in March 1677. They were ‘condemned for stealing the Lord Chancellor’s Mace and Purses’, having broken into the house of the Lord Chancellor, Lord Finch. The burglary was of ‘the mace valued at One hundred pound, and two Purses richly embrodered and set with Pearls at Forty pound, stolen out of a Closet’. The seal itself remained untouched, as apparently Lord Finch kept it under his pillow.

The two purses discovered in the strongroom, can be dated to the reigns of George IV (1820-30) and William IV (1830-7) due to the incorporation of “G 4” and “W 4” in their design.  They are made of velvet worked with silk and metal thread, spangles and seed pearls. They show a use of couching techniques and appliqué, as well as the use of applied raised work in high relief, which gives the purse a sculptural look. Such techniques were commonly used in works made for court ceremony, such as heralds’ tabards. The elaborate decoration includes the traditional symbols of the Lion and Unicorn, surrounding the royal crest, as well as an orb at the bottom centre and winged putti’s heads around the sides of the border. 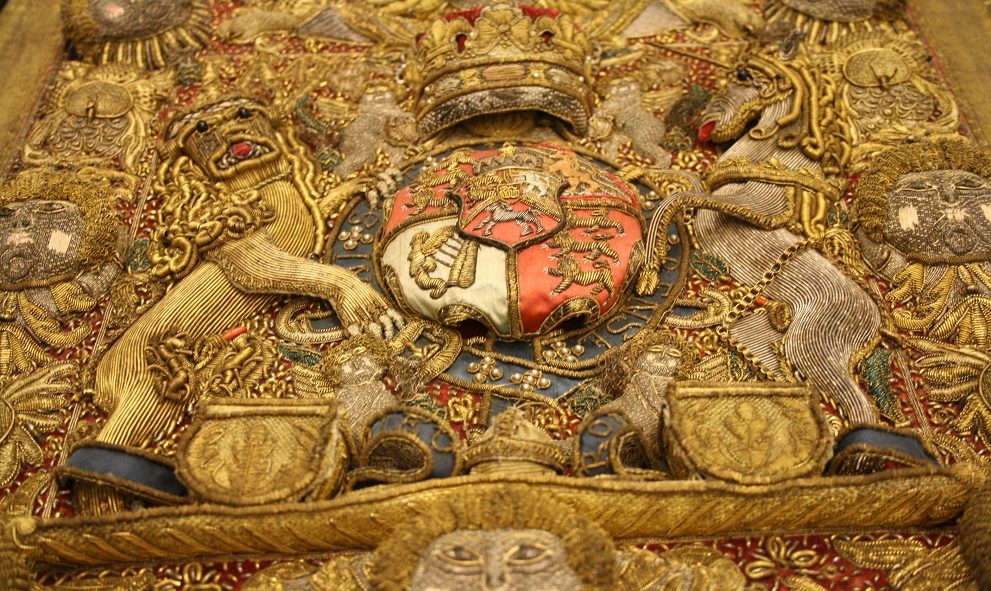 As no direct evidence of whom the purses belonged to, or how the Inn acquired them, has been found in the archives, we can only speculate as to which Lord Chancellors may have owned them.

It is possible that both purses belonged to one individual. If this were the case, the likeliest candidate would be John Singleton Copley, Lord Lyndhurst (1772-1863).  He held the office of Lord Chancellor under both George IV and William IV. He was also a member of Lincoln’s Inn, having been called to the bar here on 7 June 1804.

The purses at Lincoln’s Inn received conservation treatment in 2011, and now are in good condition, after cleaning and minor repairs. The entire purse of each has survived, although they are missing the decorative tassels that survive on examples in other collections.

Despite the mystery surrounding their provenance, the purses are striking examples of the work of royal embroiderers.  Their enduring appeal as highly elaborate works of embroidery is plain to see. A number of Lord Chancellor’s purses survive in various collections, including the V&A, the British Museum and the National Trust.