On 6 July 1954, Cornelia Sorabji died in London, at the age of eighty-seven.

She had been a pioneer, becoming the first woman to sit the Bachelor of Civil Laws exam at Oxford University and the first woman to practise law in both India and Britain. She achieved all of this before the Sex Disqualification (Removal) Act was passed at the end of 1919.

Cornelia Sorabji’s background was quite unusual. Her parents had valued the importance of education for both girls and boys, and this had enabled her to attend Victoria High School in Poona and then Deccan College. During her time at Deccan College she had won a scholarship to Bombay University. She graduated from there with first class honours in 1887, becoming the first woman to graduate from Bombay University with the LLB degree. Had she been a man this would have entitled her to an Indian government scholarship to an English University.

Although a scholarship was not offered to her, Cornelia Sorabji benefited from having influential supporters who had heard of her cause. A campaign was started by Lady Hobhouse, who wrote to The Times suggesting that others may also wish to help fund Sorabji to study at Somerville, Oxford. Lord and Lady Hobhouse had lived in India in the 1870s and it seems that Lady Hobhouse had been acquainted with Cornelia Sorabji’s mother.

Through a combination of sources, including money saved from her teaching salary, Cornelia Sorabji was soon able to fund her place at Oxford, and she started there in 1889. She was the first woman to study law at Oxford University and the first woman to sit for the BCL examinations there (although women were not entitled to Oxford degrees at this time). On completing her course Cornelia Sorabji, undertook training with a solicitors’ firm, Lee and Pemberton, who were based at 44 Lincoln’s Inn Fields. This placement was arranged through the parents of one of her college friends, and Lord and Lady Hobhouse also assisted by providing on-going support. Women were not allowed to be admitted to the Bar, or an Inn of Court, at this time, but she was granted the unusual privilege of being able to use Lincoln’s Inn’s Library for her research, sitting at the Benchers’ table. Lord Hobhouse was a Bencher of Lincoln’s Inn and had requested this permission on her behalf. There is no record of this in the Inn’s archives, but in correspondence that is held at the British Library, Lord Hobhouse writes of how when seeking their consent, he had assured the Benchers that she was accustomed to working in a male environment.

When women eventually became entitled to degrees at Oxford, Cornelia Sorabji returned to Britain in 1922 to receive hers, a full thirty years after she had completed the required examinations for it. She was also admitted to the Inn in the same year, on 1 May 1922.

She kept only six terms, being allowed a shortened period because she was a Vakil of the High Court of Judicature at Allahabad. She was Called to the Bar in June 1923, by which time she was 55 and had recently retired from her government post.

In 1940 it appears she was staying at the Inn, having leased the ground floor chambers of 22 Old Buildings. 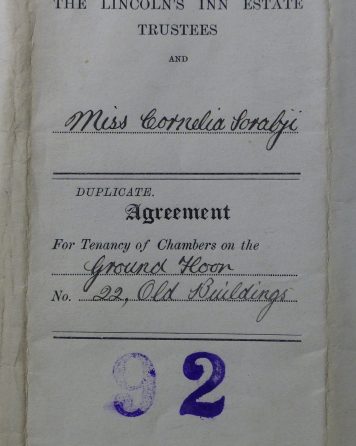 There is no documentation to suggest those chambers were let again until 1954, after Cornelia Sorabji’s death, so it is likely that these rooms provided her with a London base during this time. However in 1947 she moved to Northumberland House, a nursing home in Finsbury Park, where she died in 1954.

In May 2012, a bronze bust of Cornelia Sorabji by S. Unavane, was presented to the Inn by Dr Kusoom Vadgama. 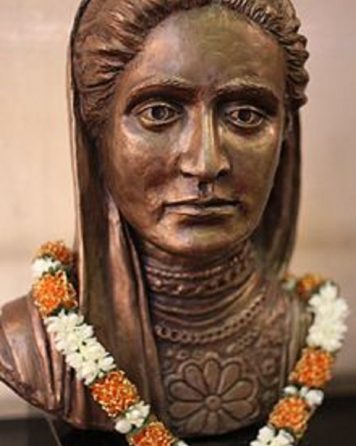