This month marks the 65th anniversary of the end of food rationing after the Second World War and provides the opportunity to reflect on how rationing in both wars was experienced in Lincoln’s Inn.

In the First World War shortages led, in 1915, to a national appeal being made to economise on comfort and luxuries.  The Inn responded to this by instructing the Kitchen Committee to arrange that dinner at the Bench table should be simpler and less expensive.  These economies were not enough and in 1916 a review of all the Inn’s activities was undertaken by the Economy Committee (a sub-committee of the Finance Committee), with a view to economise even further.  In July the committee put forward various ways to reduce expenditure in the kitchen department and had this to say on the service of meals: 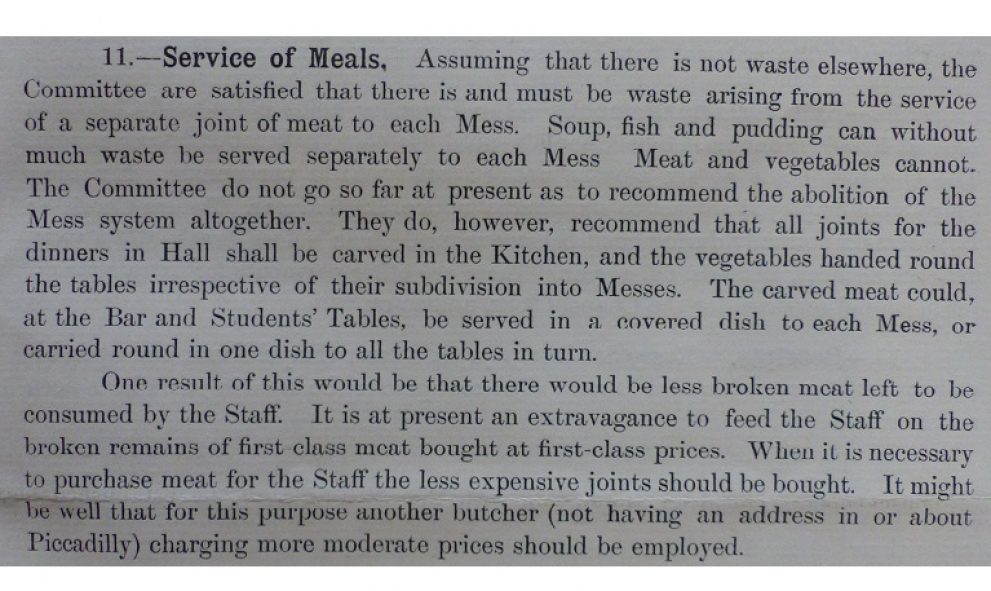 As a result, the Kitchen Committee reported to Council in December 1916 that “they are satisfied that substantial economies have been made notwithstanding the continued increase in the price of provisions.  The saving has mainly been effected in the Butchers Account and this is largely due to the carving of the joints in the kitchen.”  Then in spring 1917, after a poor harvest the previous autumn and the intensification of the German U-boat campaign, the government had to take more control over the supply of food.  A letter from the government’s Food Controller was read at the Council meeting held in May requesting the Inn to conform to recent food control orders. 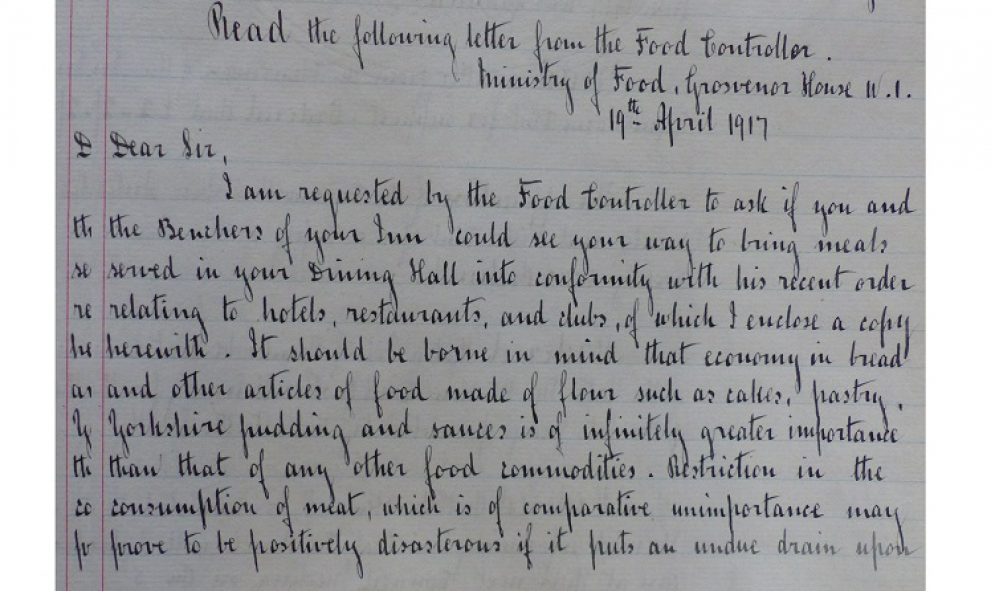 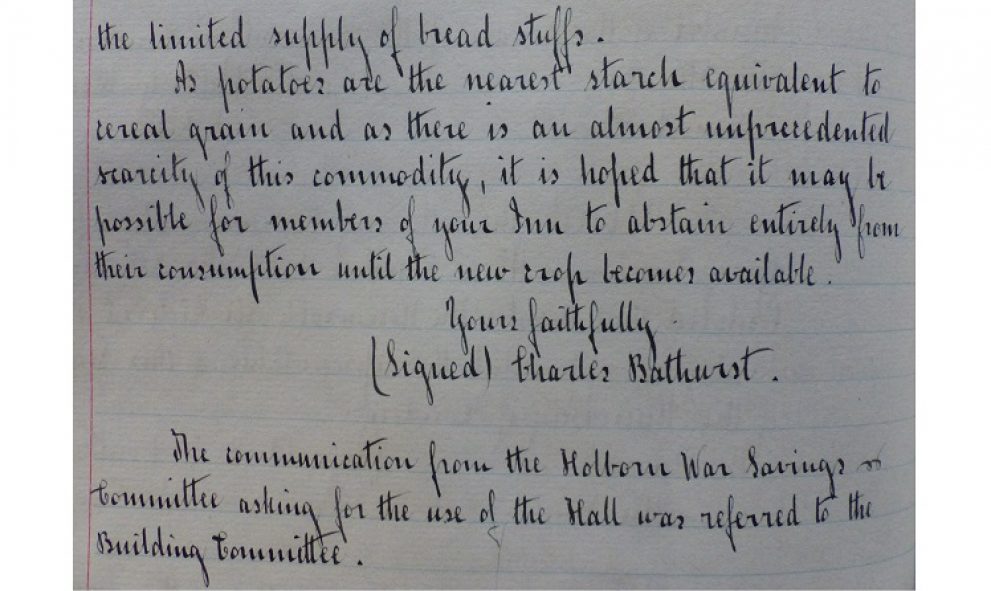 In response the Kitchen Committee reported to Council that both the Public Meals Order and the Cake and Pastry Order had “been conformed to as far as possible and a register has been kept in the form and according to the instructions provided.  The result has been progressively satisfactory and shows a reasonable compliance with the conditions laid down by the Food Controller. Though the consumption of meat and sugar is slightly in excess of the maximum allowed, the consumption of bread and flour is well below the maximum”.  We, unfortunately, do not know whether the Inn’s members abstained from eating potatoes or what effect the rationing of sugar etc in 1918 had on the supply of meals.

The effect of the war on the Inn’s wine cellars was minimal although by 1918 the Inn was having to enquire at all the wine merchants they dealt with to try and find a supply of whisky.  In 1917 some champagnes, “which are now at their best”, were sold and some Moselle was purchased, for immediate consumption.  Champagne also played a part in an amusing anecdote related by a Bencher both in words and pictures.  Sir Arthur Underhill was at a Council meeting on 18 December 1917 when a Zeppelin raid took place.  He describes in his memoirs how someone suggested that the wine cellar was probably bomb-proof and that there was a barrel of oysters in the larder.  Thus, they adjourned to the wine cellar and ate the oysters to the accompaniment of champagne until the raid was over.  Underhill afterwards sketched the event with the Treasurer, Lord Muir Mackenzie, sitting at a small table laden with oysters serving the champagne.

The experiences of this first war meant that the Inn was much more prepared to deal with World War II.  In October 1939 evening dining was suspended and students would keep term by eating lunches.  Dining was not restored fully until 1950 although the occasional dinner still went ahead.  The government, too, using lessons learned two decades before, brought in rationing at the beginning of 1940.  The Black Books give a brief glimpse of the effects of rationing when it records that at the December 1941 Council meeting a Bencher, Edmund Vaughan Williams, was thanked for his gift of a dozen new laid eggs for the Benchers’ Christmas pudding.

There is no record of the Inn digging up its lawns for the Dig for Victory campaign as happened nearby in Lincoln’s Inn Fields.  It seems, rather, that the gardens were kept as a haven of peace and enjoyment for those working or living here.  Although in a 1943 kitchen inspection report the suggestion was made to the Kitchen Committee that “in view of the shortage in the markets of herbs, onions, cucumbers, mushrooms, lettuces etc” they might make use of the “flower beds, glass boxes, cellars etc to augment supplies”.  It appears unlikely the Garden Committee took up this idea as minutes record that, between 1943 and 1944, £50 was given anonymously by a member of the Inn to be used for flowers and bulbs.  Also, in 1944, the Under Treasurer reported to the committee that the “Inn has been registered as a ‘historic building’ to enable us to obtain petrol for lawn mowing”.   In this way the spirit as well as the body was sustained throughout the war.

The catering inspection report pointed out the “expenses for meat, offal, fish, suggests that there are meat meals served too often and not sufficient ‘made up’ main entrees.  The account with the fish and poultry merchant is particularly high”, however, “the types of menus being served seem satisfactory bearing in mind present difficulties of food supply”.  Besides examining the kitchen accounts the report commended the kitchen staff for their good work in such trying circumstances. 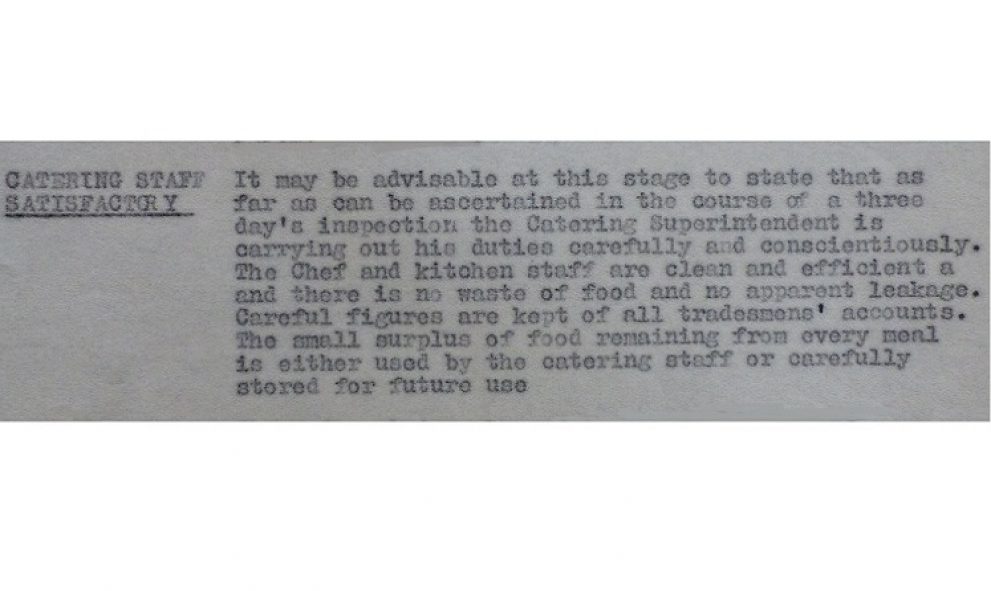 It was also noted that the waiters could not “subsist on the £2 per week rate and they obtain evening work elsewhere” and staff were not taken for granted as “with the present conditions in the labour market it is believed that difficulties may be experienced in replacing the catering staff if any of them should leave at this time”.

Economising and rationing in the catering department did not just cover food but extended to equipment and the inspection report interestingly commented on this as well. 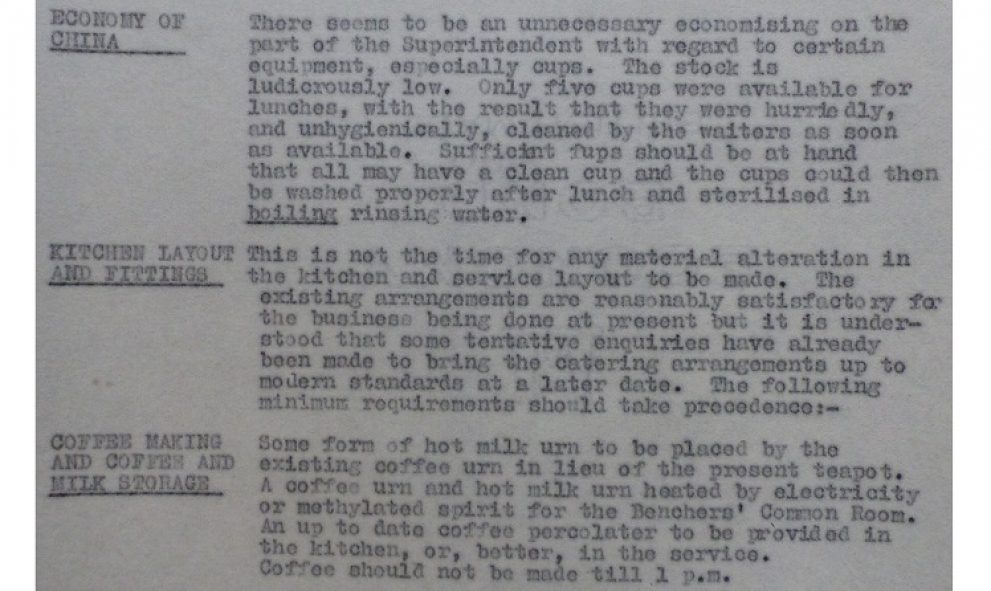 Very little is mentioned about wine during this latter period but the Under Treasurer, Norman Marriott, reported to the Wine Committee in April 1941 that he had taken from the cellars for his own use 5 dozen whisky, 1.5 dozen gin and 6 dozen sherry and requested that he be allowed to pay for it at cost.  It is recorded that Council, however, decided that he need make no payment in respect of this. The Under Treasurer felt obliged to provide an explanation for his actions and so made a note in the margin of the Black Book.  It stated that the alcohol was used for the benefit of the fire fighters and those tenants who had taken refuge in the Hall basement “at a time of great stress” during the Blitz.

Problems with supply lasted even after the war was over, for example, in 1945, when the Inn began to buy wine again, Australian sherry had to be purchased (for consumption at Sunday lunch) as opposed to the usual Spanish sherry.  Slowly the Inn returned to pre-war normality with the Duke of Edinburgh attending a Grand Day dinner on 18 July 1949 and normal dining returning in Michaelmas term 1950. 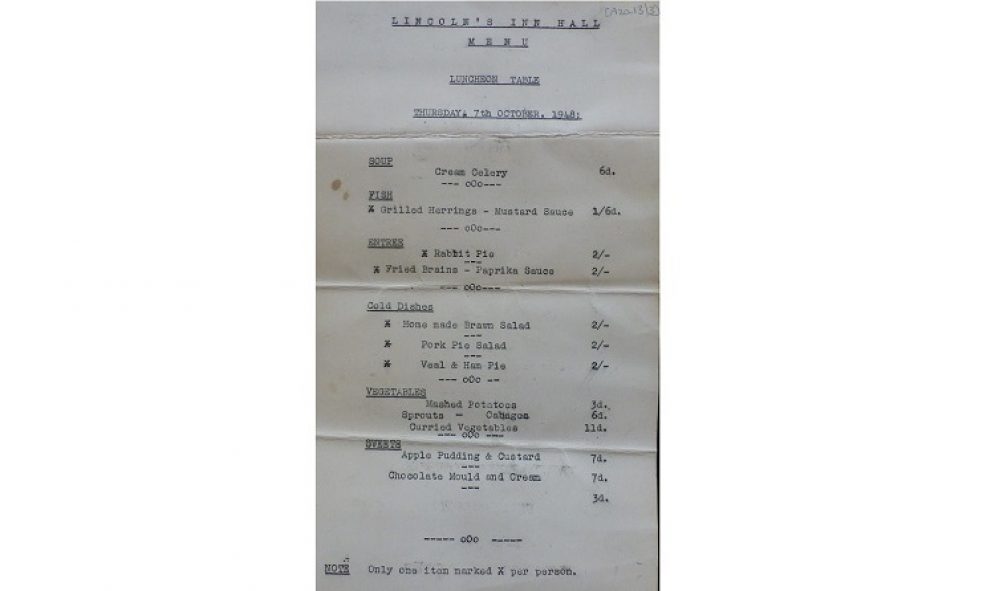