John Sullivan did not always intend to enter the Church and he had initially looked to continue his legal studies that he had started at University. As a result he left Ireland when he was 24, and this month marks the anniversary of his admission to Lincoln’s Inn on 24 October 1885.

He went on to be called to the Bar on 13 June 1888, and his signature can be found in the Inn’s Bar book for the period.

After this time John Sullivan travelled around Europe and even stayed at the Orthodox monastery of Mount Athos in Greece. In December 1896, at the age of 35, he was received into the Roman Catholic Church at the Jesuit Church, Farm Street in London. This proved a life changing moment for him, and from this point there was a marked change in how he led his life. He opted to live plainly and simply, and on returning to Dublin he became a regular visitor to patients at hospitals and convents in the area.

In September 1900 he decided to enter the Society of Jesus and commence his novitiate. After two years at St. Stainislaus College in Tullamore, he completed studies in philosophy at Stonyhurst College in Lancashire. He continued his studies by studying theology at Milltown Park, Dublin in 1904 and he was ordained as a priest on 28 July 1907.

In his subsequent work he gained a reputation for great holiness, and for caring for those who were suffering. People in need of healing were drawn to him and asked for his prayers. Many felt the power of God had worked through him to cure them.

Father John Sullivan passed away on 19 February 1933 and since that time he has been revered by many as a Saint. In September 1960 he was declared a Servant of God, and in November 2014 he was declared Venerable by the Pope, before his beatification ceremony in 2017, the first to take place in Ireland. The next stage after beatification is canonisation, and in order for this to take place a further miracle is required, one which is confirmed to have taken place after the beatification

A copy of the beatification order of service was kindly donated to the Inn’s Archive in 2017. 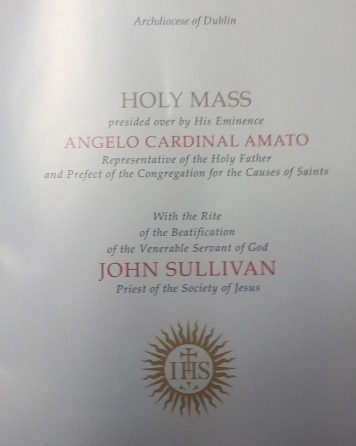