The Inn has never historically owned property outside of the main Inn site with the exception of one property, the King’s Grocer’s House at 24 Newgate Street. Rather than being deliberately bought, this property was bequeathed to the Inn on 30 April 1565 through the will of Sir Roger Cholmeley, Treasurer of the Inn 1529-30.

The house given by Cholmeley was probably originally made of wood and tiles as is hinted at in some of the earlier deeds we have for the property. The image below shows the extract from Cholmeley’s will bequething the house to the Inn (ref: D1c6) and a transcription of it can be downloaded from the right-hand sidebar. 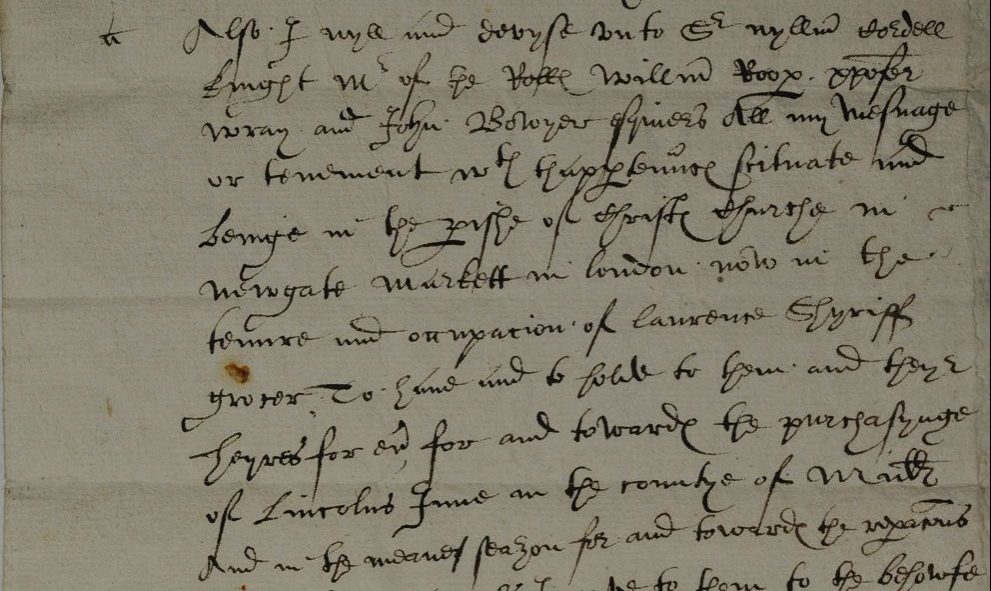 The unusual name of the building derived from the tenancy of the property by Lawrence Sheriff, a grocer of the City of London during the 1550s and 1560s, and member of the Grocers’ Company. He was also a noted supporter of Elizabeth I and, by his will, founded a grammar school in his home town of Rugby, now famously known as Rugby School. Strangely enough, Cholmeley was also founder of Highgate School, so the educational link between these two men and the property at Newgate Street is certainly noteworthy.

The final transfer of the property to the Inn was made by the trustees of Cholmeley’s will on 28 November 1575. The trustees were all members of the Inn and were Christopher Wray (judge and Speaker of the House of Commons), William Rooper (secretary and son-in-law to Thomas More) and William Cordell (lawyer and Speaker of the House of Commons). The rather unusual looking document below (ref: D1c9) shows this transfer deed with the numerous seals on the bottom of the document belonging to each bencher of the Inn who has signed the deed acknowledging transfer of the property. As such it is a good record of all coats of arms of each of the benchers who were at the Inn at the time the deed was created. 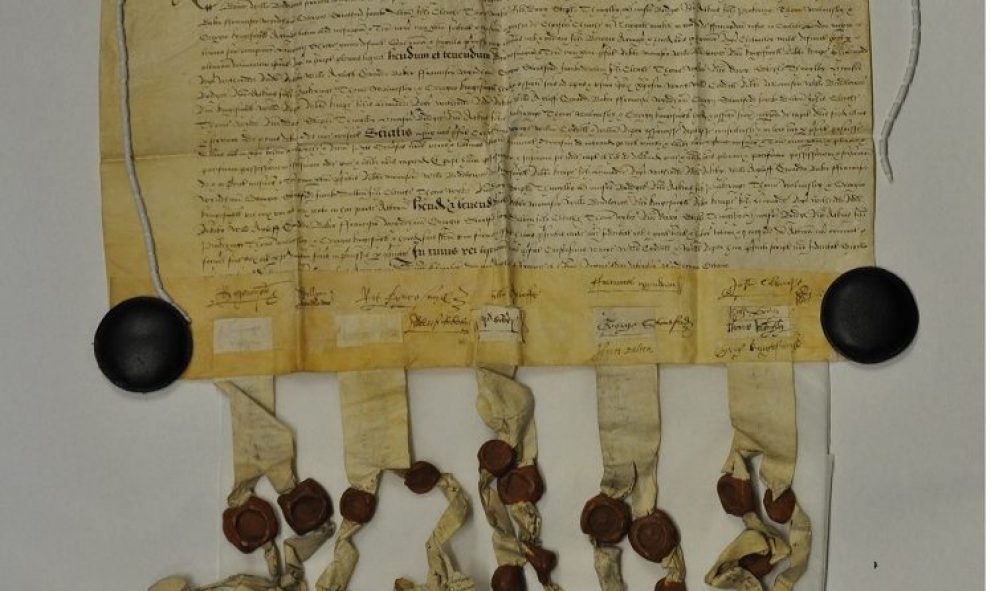 Unfortunately the property was within the area of the City destroyed by the Great Fire of London in 1666 so no trace of the original building survives. The image below shows a plan detailing the suggested layout for the replacement building. It is attached to a lease for the property made out to Keilway Guidott, Chief Butler and Steward to the Inn who leased the property from 1639 until at least 1667, and is dated 25 May 1667 (ref: D1c13). 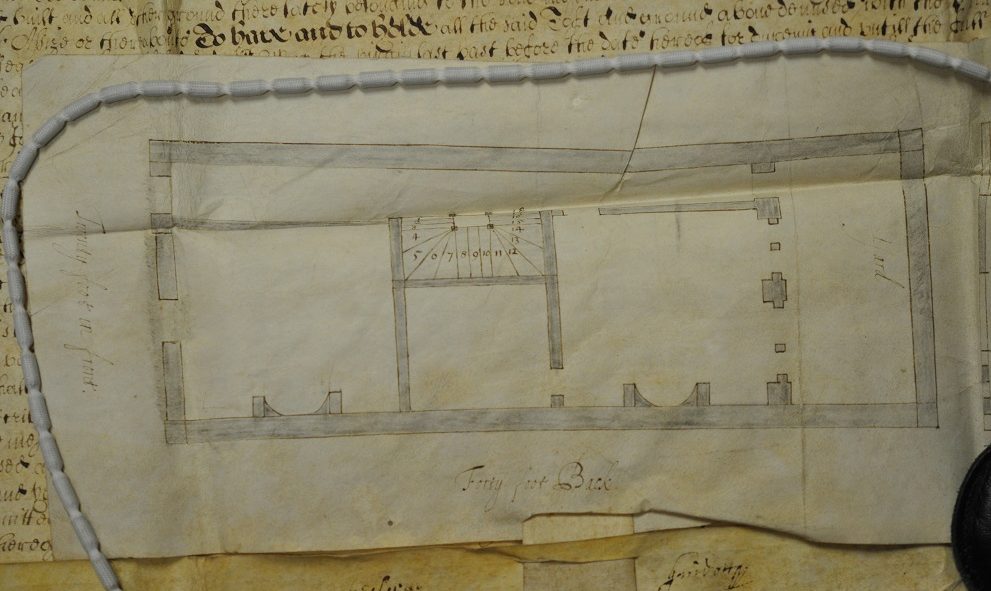 There are relatively few documents relating to the property that survive in the Archives between this date and the early twentieth century, although we do have enough to show the development of the building including the change of use into a pub with a change of name, first to ‘the Plow’ and then to ‘the Rainbow Coffee House’. The use of the building as a pub continued until the 1860s when the site was once again redeveloped and replaced with a new building that was used as Mouflet’s Hotel. The image below shows the facade of the new building as it would have appeared in the 1860s. 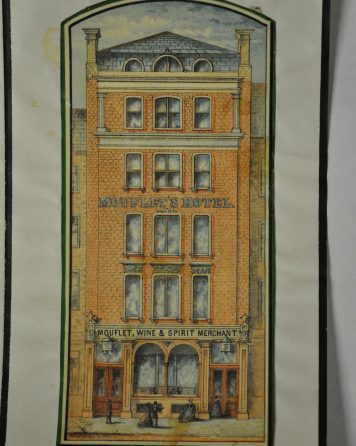 By 1927 this building had been gutted and turned into a warehouse and was not considered to be in particularly good condition when sold to the Great Western Railway Company for £9,000; the money being put into an educational trust fund named after Cholmeley. It is known that Roger Cholmeley himself was actually expelled from the Inn three times while a student here so it seems rather fitting that someone who proved to be such a troublesome student is now best remembered as a benefactor of scholarships supporting the Inn’s best students.

Since few such items survive in the Archives, it is also worth mentioning that we have the original deed box that the documents up to and including the 1667 deed were stored in. It is made of wood, covered in leather and is lined on the inside with pages from the 1618 edition of A Treatise in Generall of Blazing Starres, by Friedrich Nausea, translated by Abraham Fleming, imprints of which were made in 1577, 1580 and 1618. The box also contains an example of a quill pen and although there is no real way to date it, I would certainly like to think it is contemporaneous to the box and the deeds it originally held. The image below shows the box with some of the original deeds and quill pen. 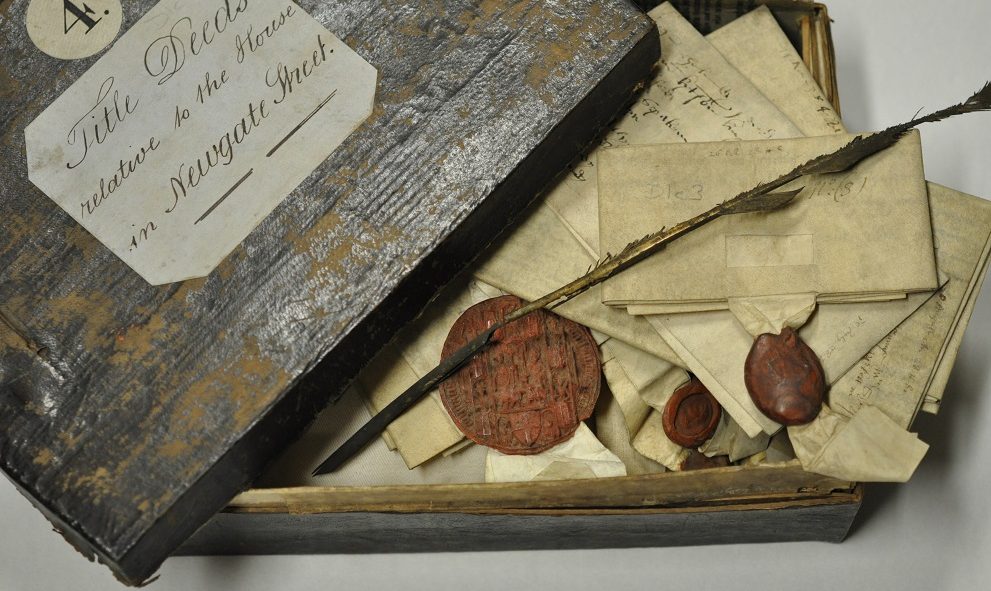