By comparison to the other Inns of Court which were very heavily bombed during the Second World War, Lincoln’s Inn survived the duration relatively unscathed. However, although it is known that the Inn suffered some loss of windows during the war, it seems to be less well known that one area of the Inn that was badly damaged was Stone Buildings.

Looking at the buildings today you would barely be able to see the effects of the severe damage the buildings sustained during the Blitz, particularly on the nights of 10 October 1940 and 10 May 1941. In the October raid, 9 Stone Buildings was very badly damaged as can be seen from the photograph below. 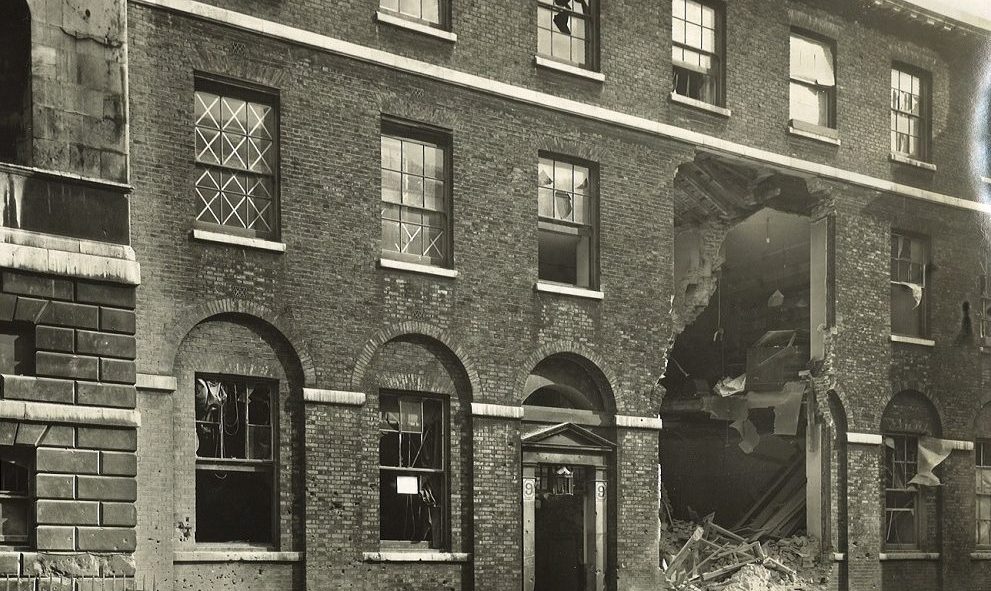 When the bomb came through the roof of the building, taking the staircase with it, the tenant of the top flat, Sefton Delmer was entertaining a small party including Prince Bernhard of the Netherlands, Ian Fleming and the daughter of the then Belgian Prime Minister Hubert Pierlot. Delmer recalls in his autobiography that despite being covered in dust they carried on with their party until they were asked to leave the building by an ARP warden. As you can see from the photograph, to continue a party in a building that had been damaged as badly as this must have been quite an achievement! 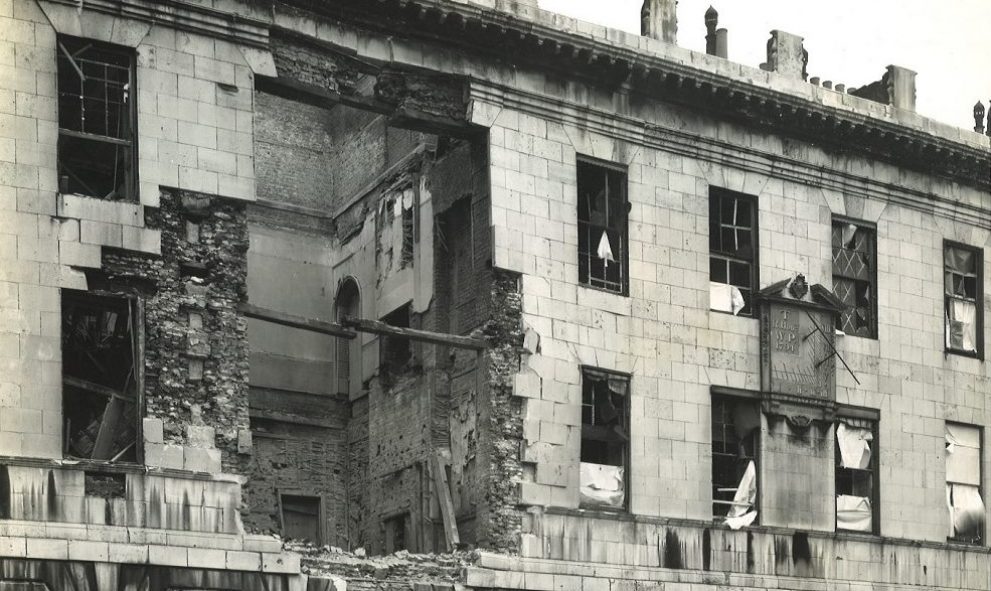 This damage also resulted in a great loss to the Inn’s finances. Indeed it is noted in the Finance Committee Minutes that the damage to the Inn, particularly around Stone Buildings, resulted in the loss of income of rent from chambers amounting to about £10,000 a year which then was about a third of the Inn’s income.

The gaps left in Stone Buildings at number 3 Stone Buildings and on the upper storeys of the adjacent properties remained until the late 1940s when plans were drawn by Architects who hoped to repair the damage. As you can see from the plans below the extent of the damage was quite large with the entire top floor of 1 to 6 Stone Buildings having been destroyed although this did allow for redevelopment of the Buildings which might not have been possible otherwise. Included in the development were much needed further indoor toilets and lifts going to all floors. Please use the gallery below to click through the plan for each floor. 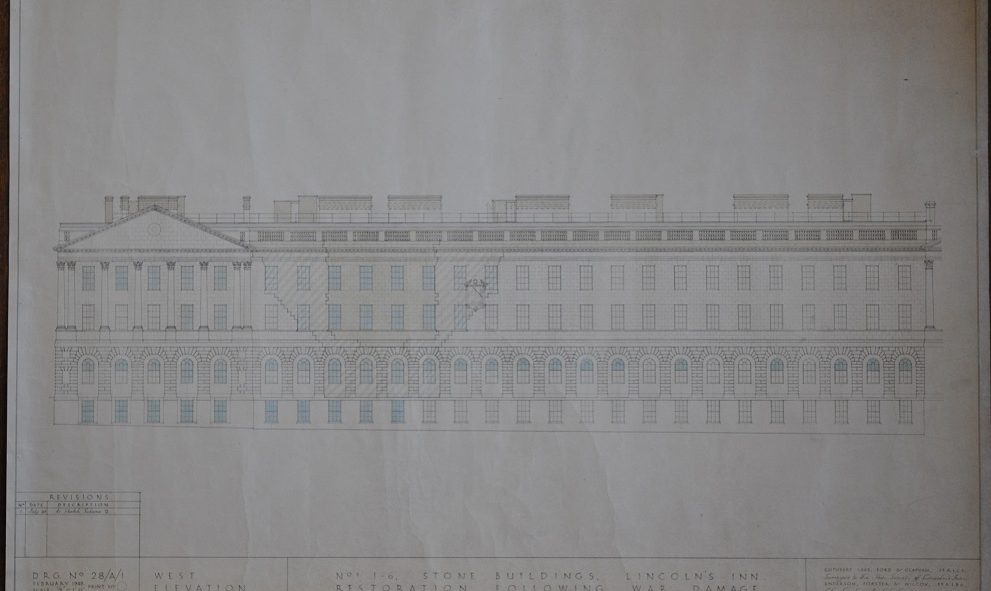 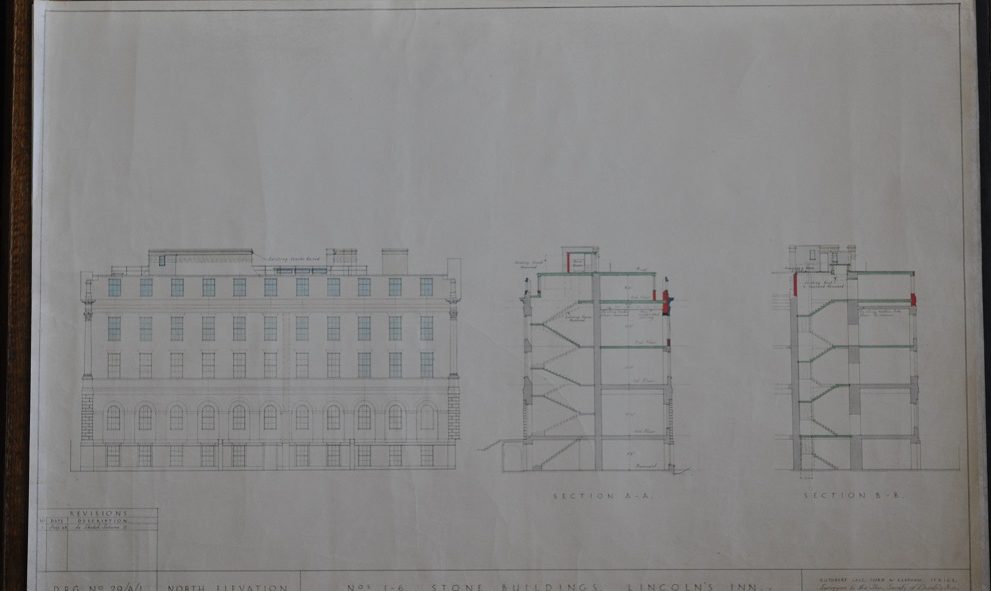 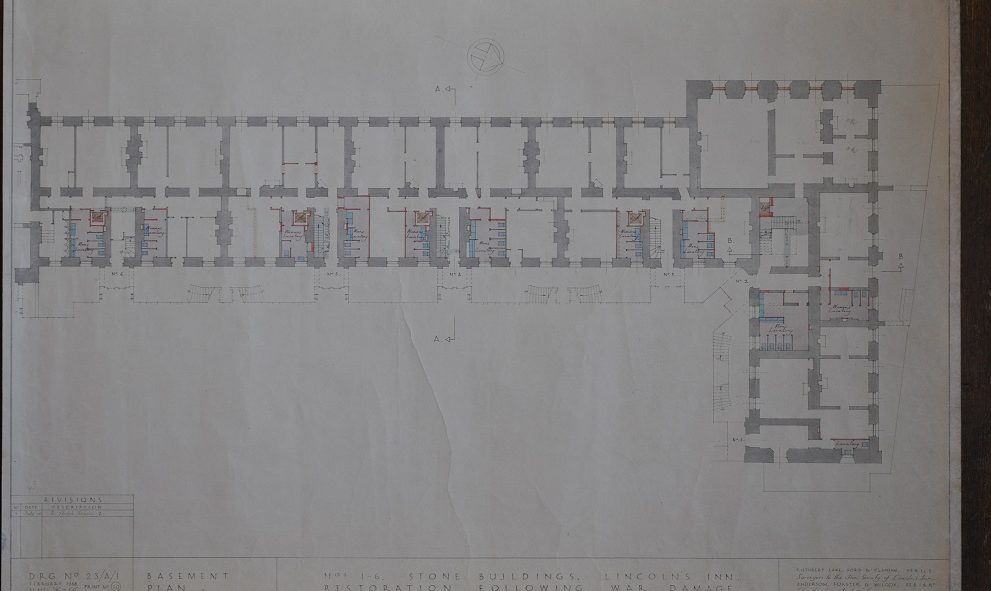 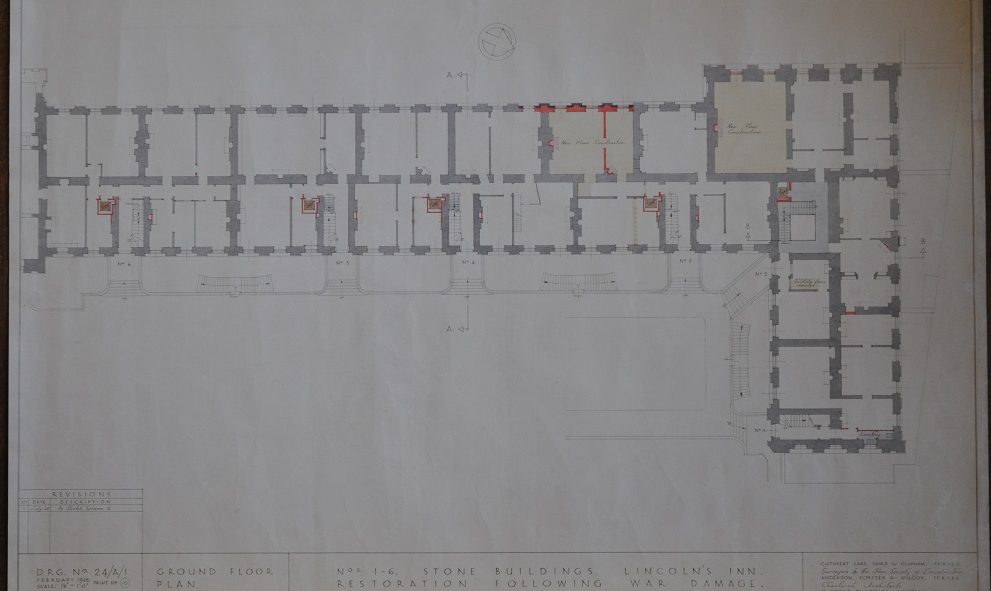 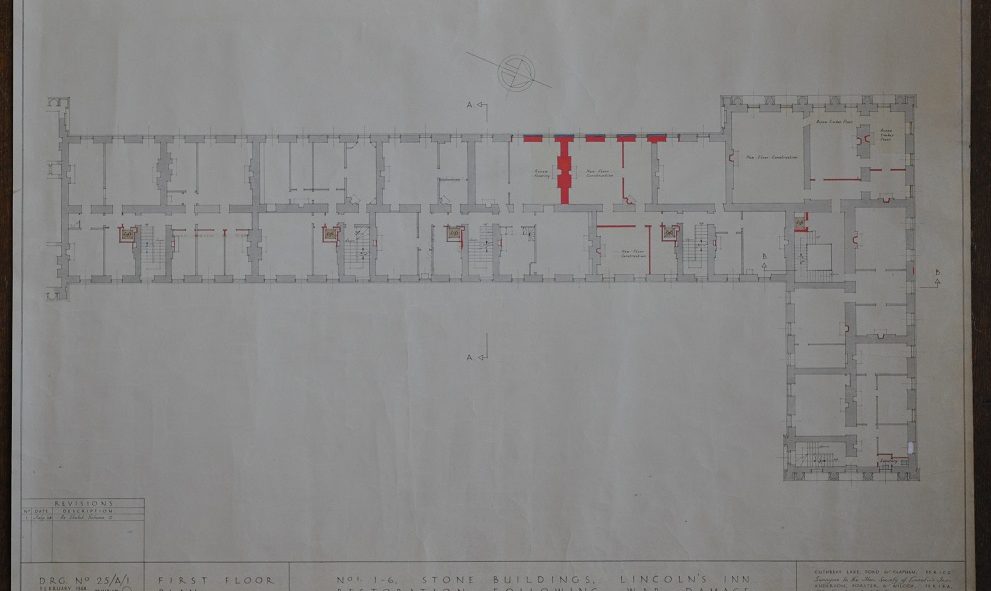 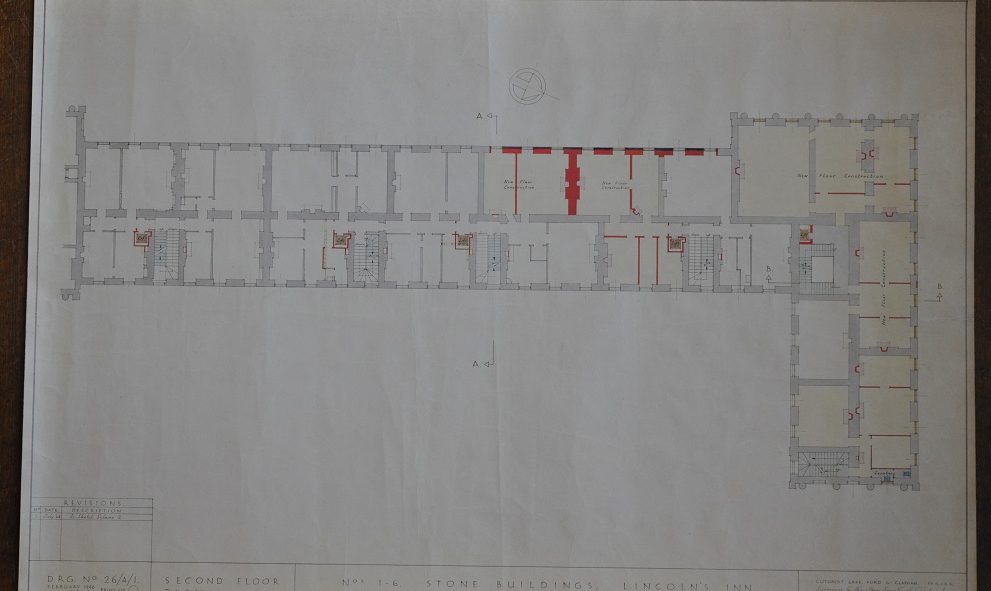 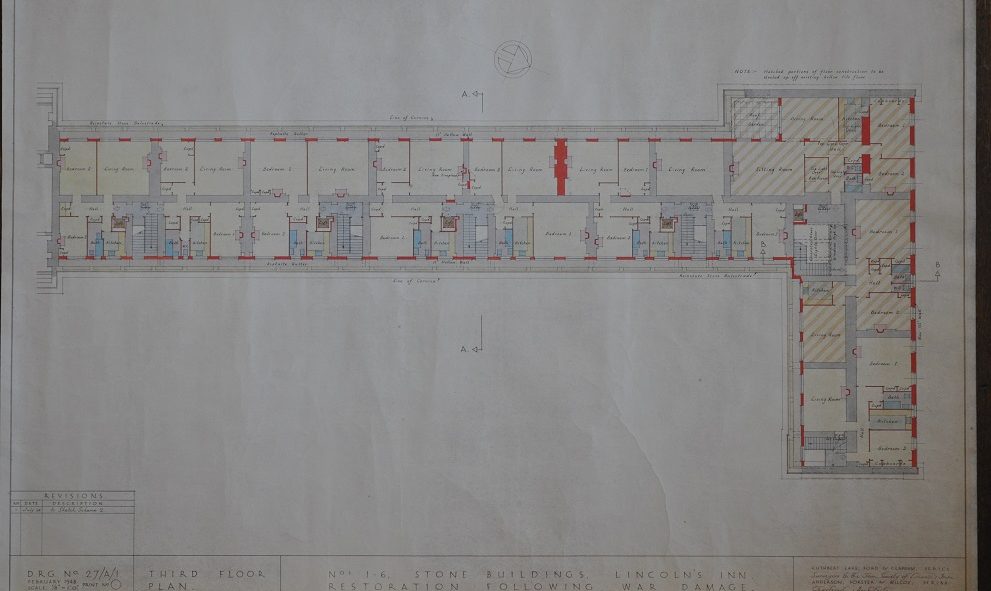 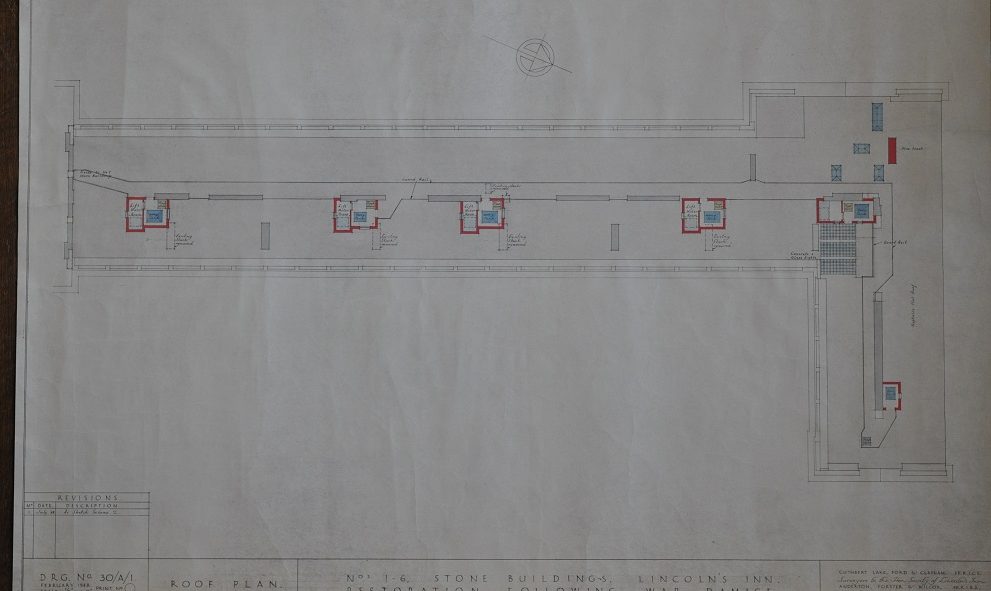 The estimated cost of restoring and refurbishing the damaged buildings came to £2087 although only £363 5s 2d was recoverable from the War Damage Commissioners, the remaining £1,723 14s 10d having to be found from the Society.