This year marks the 200 anniversary of the Battle of Waterloo which took place on the 18 June 1815 and so this month we’re looking at the Inn’s connections to the Napoleonic wars.

The first acknowledgement to the wars with France is a document in the Archives (ref: F2b/72) which lists men from St. Andrew’s Holborn parish who were found by the Inn and willing to join the Navy.  Lincoln’s Inn accepted a share of the obligation on St Andrew’s Parish to find these men notwithstanding the Inn’s claim to be treated as an extra‑parochial enclave. Please click through the gallery below to flick through the list which includes the names, parish and place of birth, occupation and age of the recruited men. 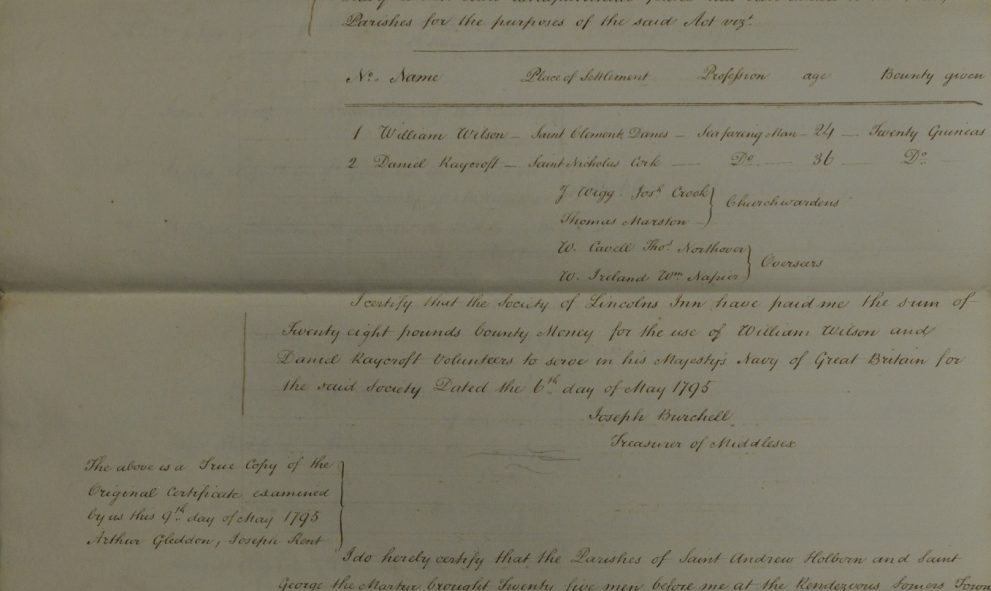 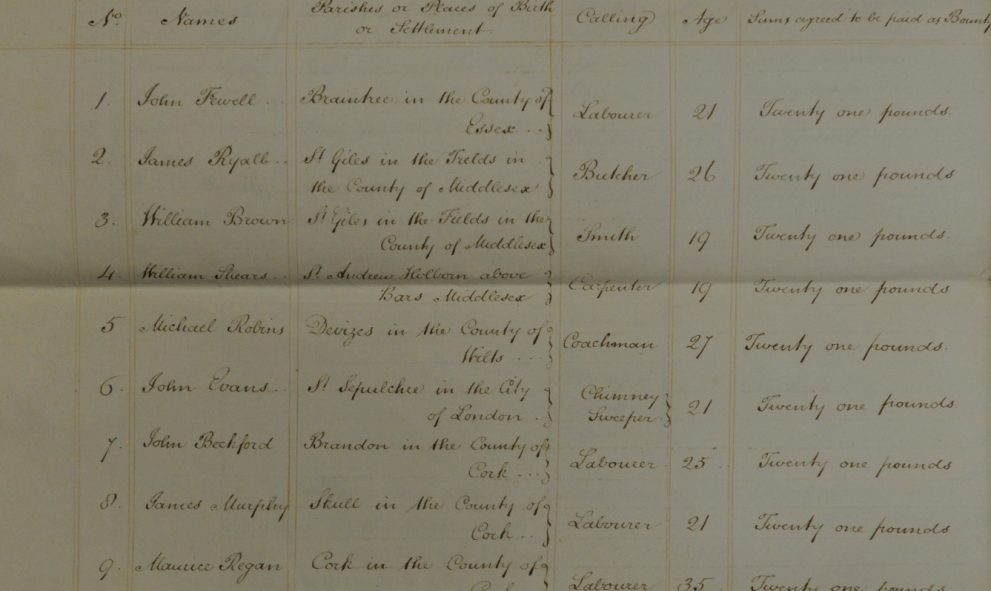 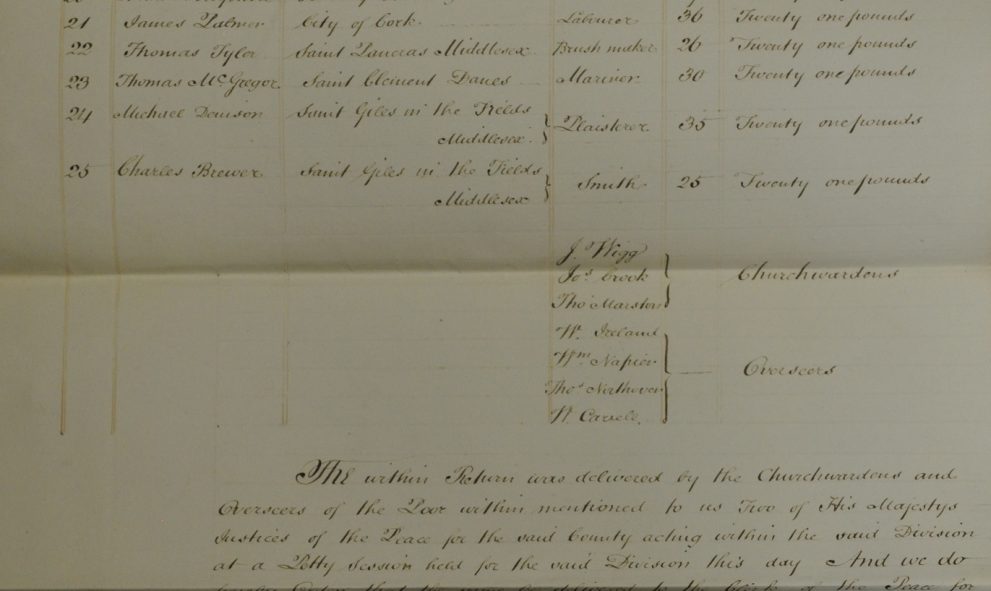 This search for men was required by the two ‘Quota Acts’ which were passed in March 1795. The first Quota Act obliged magistrates to identify and return a certain number of men from each county to join the navy. This was then extended later in the month with a second Quota Act which obliged magistrates to identify a separate, greater number of men from all the port towns of Britain, including London. As it was decided 5,704 men had to come from London, the quota was then further subdivided by parish. The images below show the front pages of these two Acts, from the Library’s copies.

The Inn’s records then go relatively quiet until 1803 when it is recorded in the Black Books that four members of the Inn were held as prisoners of war in France: Frederick Ritso (admitted 17 November 1792),  Matthew O’Reilly (admitted 26 October 1799), John Frank Nicholls (admitted 25 November 1800) and Henry John Grant (admitted 27 January 1801). Ritso was detained after accompanying his sick wife to France on the advice of his physician who had suggested she would make a better recovery abroad. He was arrested in May 1803 and remained a prisoner of war for eleven years. Matthew O’Reilly was apparently visiting France in 1802 and detained as a prisoner of war until May 1807. John Frank Nicholls accompanied his sick sister to the South of France where she was to recover but he was arrested in May 1803 and wrote to the Inn from Toulouse to say that he had been arrested as a prisoner of war and so was not able to keep his terms nor able to pay for the rent on his chambers which were in Dial Court and Chapel Row, chambers demolished at the end of the 19th century to make way for 8-10 Old Court. Henry John Grant was, like Nicholls, visiting the South of France to visit a sister and sick cousin to escort them back to Britain but he was then arrested and detained by the French government until September 1806. It is likely that these men were all arrested after 18 May 1803 when the Treaty of Amiens, which had been signed on 25 March 1802 and brought temporary peace between Britain and France, was broken. Shortly after our members were released from prison in France, it was recorded in the Black Books that the Inn would give £50 towards a general fund that was to be used for the relief of British prisoners of war in French prisons. The Inn was also active in providing money for veterans of war and on 28 November 1805 donated 100 guineas to the ‘Patriotic Fund’ for the relief of the wounded and the widows and orphans of those ‘who fell in the engagement with the combined fleets of France and Spai'”, referring to the Battle of Trafalgar.

As it is, the only reference to the Battle of Waterloo in the Black Books is to a payment of 13s 9d for prayers to be said at a service of thanksgiving that took place in the Chapel. The thanksgiving prayers were standard prayers that were to be said at services across Britain and were reproduced in the July 1815 edition of the Gentleman’s Magazine. Below is a copy. 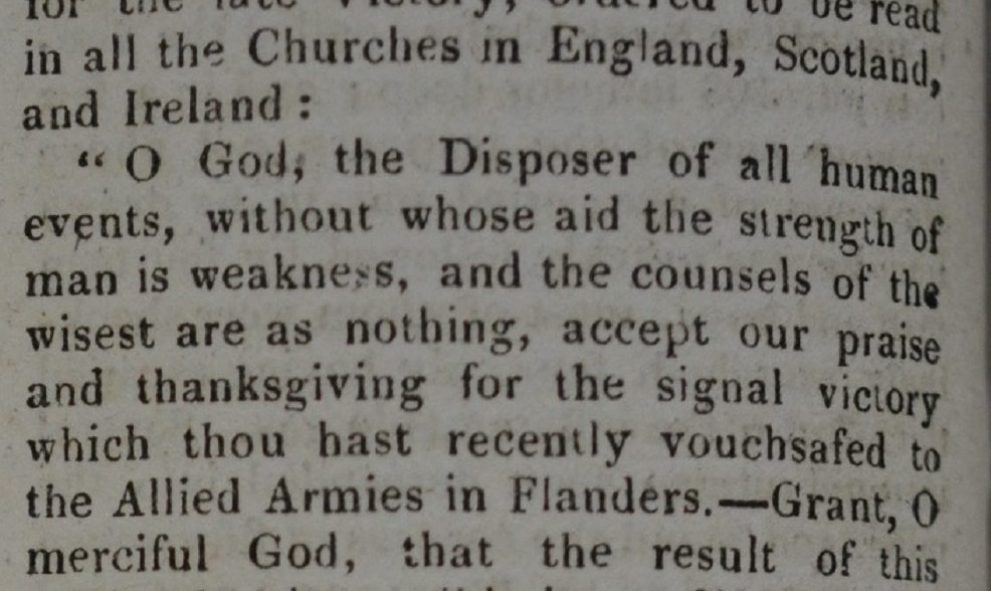 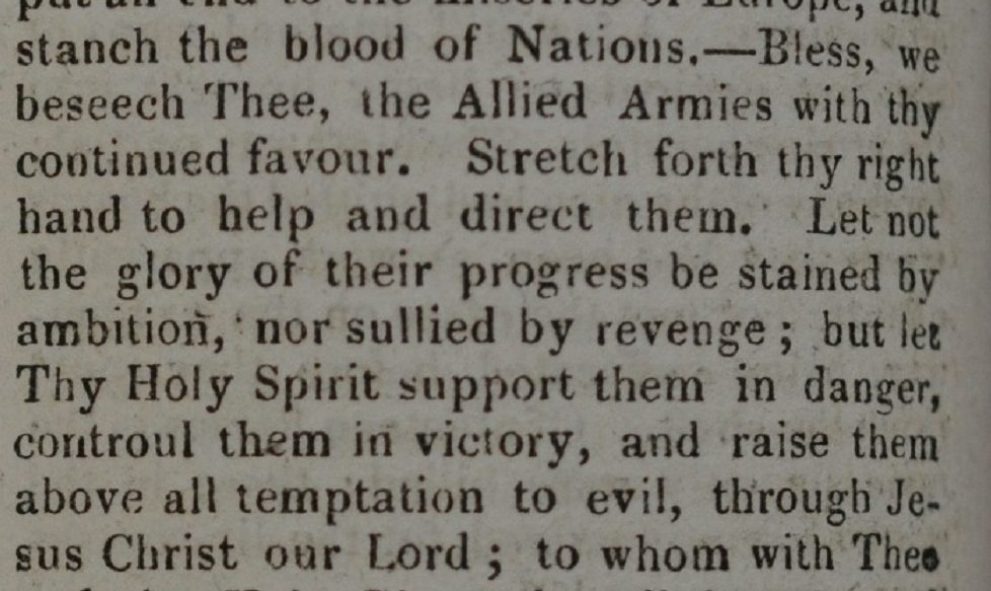 The Inn did have one member, however, who had a more direct involvement with the Napoleonic Wars. William Wickham was born in 1761 into a wealthy family and attended Winchester College and Harrow before going up to Christchurch, Oxford. He also attended university in Geneva before being admitted to Lincoln’s Inn in 1782. This connection to Switzerland set him in good stead for spying in France. His personal papers and those of his family are at Hampshire Archives and Local Studies.

Finally, while it is well known that the Duke of Wellington was the leader of the British Army at Waterloo it is possibly less well known that he opposed the Reform Act of 1832 which introduced far reaching changes to the electoral system in the United Kingdom. This made him extremely unpopular and as such he was subjected to various attacks by angry mobs in London at the time who disapproved of his stance opposing greater enfranchisement. On one such occasion that took place on the anniversary date of Waterloo, the Duke of Wellington was attacked by a mob on his way to visit Sir Charles Wetherell, a member and resident of Lincoln’s Inn at the time. He was then forced to take shelter in Wetherell’s chambers at 5 Stone Buildings and, according to the papers of Thomas Creevey now held in Northumberland Archives, had to be protected from a mob of about 2000 people by ‘a large body of police’ who escorted him all the way back to his home, Apsley House.