This year marks the 200th anniversary of the birth of Victorian painter and sculptor, George Frederic Watts. G F Watts was renowned as one of the great portrait painters of the later Victorian era.

He was at the height of his success when the Inn commissioned a portrait from him of Roundell Palmer, Earl of Selborne in 1892.

The Inn’s connection with the artist had actually been established long before this portrait was undertaken. In June 1852, G F Watts had contacted the Society, offering to paint a traditional fresco (painted on freshly laid plaster) in the Great Hall. Watts believed in ‘awakening a national sense of art,’ and in order to achieve this he advocated large scale wall paintings in fresco to decorate public buildings. Alongside his offer to Lincoln’s Inn he also offered to paint a mural called ‘The Progress of Cosmos’ in the great booking hall at Euston station. This offer was ultimately rejected by the directors of the London and North Western Railway. Both projects he offered to undertake for free, asking only for the cost of the materials. This generous offer was accepted by the Inn and a sub-committee devoted to the fresco painting was put in place to liaise with Watts.

At a meeting of the Fresco painting committee on 22 July 1853, the Society’s architect Phillip Charles Hardwick (son of Philip Hardwick, architect of the Great Hall and Library) was asked to prepare a report of any necessary works required before the fresco could be started. Philip C Hardwick was a close friend of Watts, and it is likely that it was his connection with both the Inn and Euston station (on which he also worked at this time) which inspired Watts to approach both these places initially.

The fresco was to be at the north end of the Great Hall. Watts asked for the upper three rows of panel of the wainscoting to be removed so that the fresco could be brought down to that level. Hardwick estimated a total cost of £90.18 for ‘altering the framing, roughing the surface, cementing the wall and protecting the flues’ as well as ‘erecting the scaffolding and forming a lobby round the door.’ Added to this was the requirement of ‘taking down and removing the Hogarth.’ This painting was to be returned to its previous location in the Old Hall, where it is still located today. The wall above the panelling was to receive a coat of Portland cement and the surface of the wall was to be roughed. The plaster would be added on top of this during the progress of the work, in the true style of fresco. A later note records that the scheme for roughing the north wall was abandoned and instead battens and lathes were laid over the surface. This work was undertaken in August and September 1853. Hardwick observed that the cement ‘will not be sufficiently dry this year to enable Mr Watts to commence painting’ and as a result it was agreed that the scaffolding would be erected the following year.

By January 1854 word had reached the committee that Watts had spoken of being ready to start painting. Mr Doyle, the Inn’s Steward, was asked to write to the artist requesting official written confirmation of this, and to remind him of the Inn’s need to factor in the ‘ordinary uses for which the Hall is required.’ Watts replied on 5 January 1854, writing ‘I am anxious to execute my offer, and wish to commence as soon as possible’ and that ‘if the committee entertain my views and wish me to carry out my design it appears to me that there is nothing to do but put up the scaffolding and prepare the wall.’ By 20 January 1854 Mr Hardwick had reported that the north wall had been prepared for the fresco. He confirmed that he would write to inform Mr Watts that the scaffolding would be arranged so that ‘the Hall will be ready for the commencement of the work on the expiration of this term.’

Having checked on preparations in March, Watts started work on the fresco on 19 April 1854. However his progress was hindered by bouts of ill health, causing him to write on 21 July 1854, apologising for the lack of headway with the fresco, explaining ‘I have been so very ill that it has been out of my power to do any work at all.’ He proposed to resume work in 1855, enabling him to finish the work in the long vacation. In November 1854 the Benchers approved Philip Hardwick’s request that the scaffolding remain in place (after being previously reduced as far as possible) in preparation for the artist’s return after the ‘short, dark days’ during which it would not be possible to continue painting. 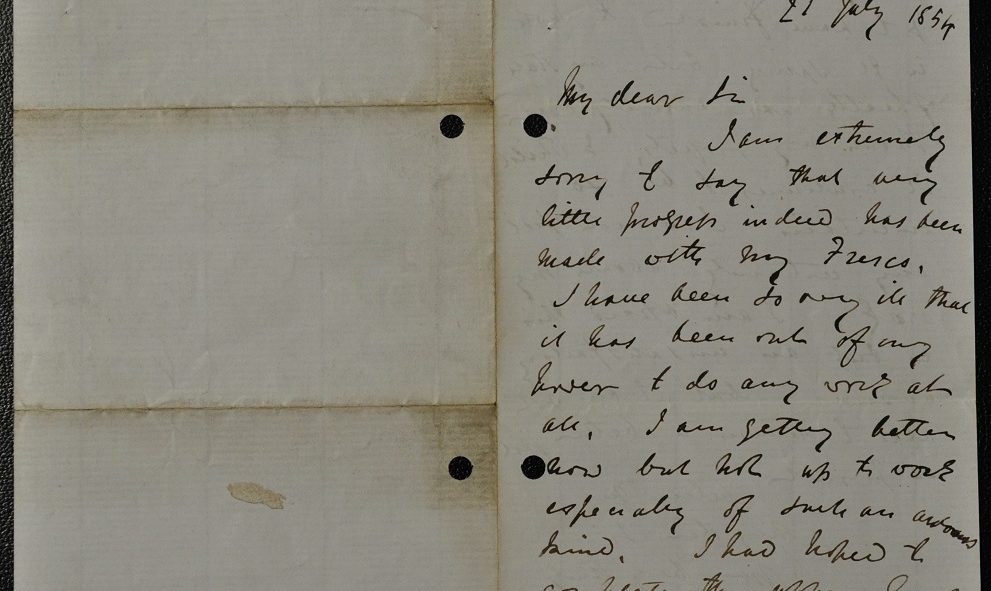 G F Watts writes again on 12 May 1855 to stress his intention to ‘give all my time and energy to work.’ He apologises for the delay, and for the fact that it may have, ‘been the cause of inconvenience or annoyance to the Benchers.’ He adds that he hopes that ‘the permanence of the work, should it not be a gross failure, will I hope be considered in the light of compensation.’ This letter and an accompanying one from Hardwick were put before the Benchers at a Council held on 22 May 1855.

By 1856 the fresco was still not finished, and in August Watts wrote to Hardwick to explain that ‘I have been long suffering from an affection of the brain of a very severe kind and am promised recovery only upon condition of abstaining from all work and spending the winter in a warm climate.’ He regretted, therefore, that he would be unable to work on the fresco that year.

By this time the Benchers had grown tired of the constant presence of the scaffolding in the Great Hall and at a Council meeting on 25 November 1856 a motion was passed for its removal.

In June 1857 Watts wrote to say that he was back in England and anxious to start work on the fresco again. He stressed that he would hope to finish it before the winter set in. This news was met with reservation by Council, leading Watts to write again, stressing his desire to finish and to gain their approval to proceed. 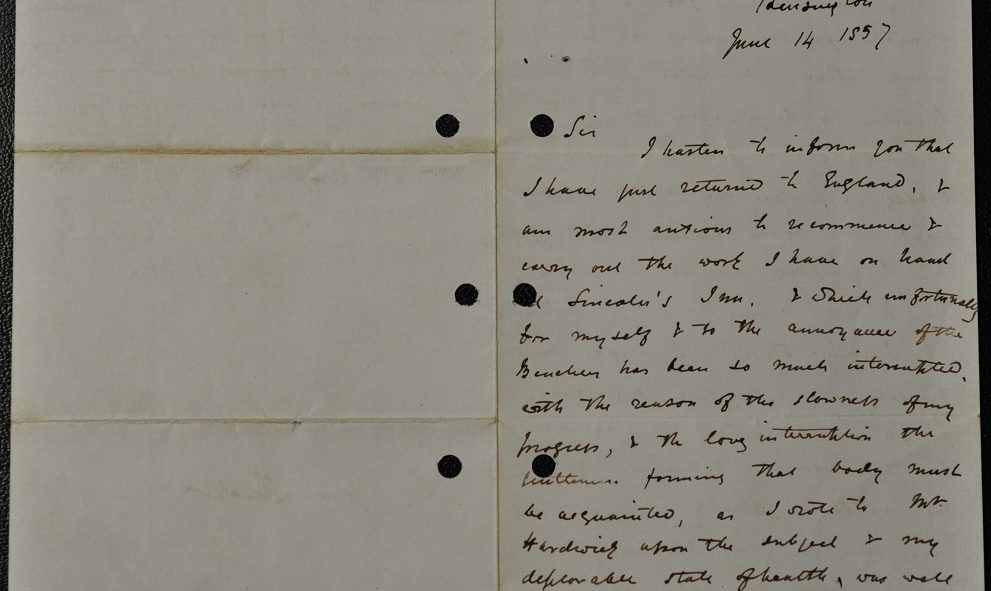 Watts began work on the fresco once again, and on 13 October 1857 he wrote to the Inn, ‘I have worked hard and greatly advanced the picture, so far indeed that a short time and a small scaffold will enable me to bring it to conclusion.’ Unfortunately, he was taken ill again, and work could not be completed in 1858 as intended. He wrote in November 1858 to say that ‘a month’s good work would suffice to bring it to a close…[in] the long days of next vacation.’

The fresco is finally completed by Watts in October 1859. Philip C Hardwick wrote to the Treasurer on 25 October 1859 to confirm its completion and commenting ‘it has been a source of much regret both to him [Watts] and to myself that work has been delayed from time to time by the state of his health, which has, I fear caused some inconvenience to the Benchers.’

Despite the length of time the Inn had been forced to wait, they seem to have been enamoured with the completed work. In November 1859, the Treasurer, with some of the Benchers, held a meeting to consider the lighting of Hall during dinner. This was done to ensure appreciation of the full effect of the fresco. Later in the same month they requested a key to the fresco from the artist, to act as an ‘aid to the understanding of and due appreciation of your design.’

The Fresco painting committee was tasked with considering how best to thank the artist. They recommended that G F Watts be invited to dine with the Bench in the Great Hall on Grand Day of Easter term 1860. After the dinner, they suggested that the Treasurer should present him with five hundred sovereigns ‘in a handsome purse contained in a silver cup.’ This proposal was agreed and a silver-gilt ciborium was purchased. On its presentation to Watts it was stressed that it should not be seen as remuneration or compensation, but as ‘a complimentary, a friendly, and a grateful remembrance.’

In 1925 Watts’ widow gifted the cup back to the Inn and it is now one of the most impressive pieces of plate in the Inn’s silver collection. The completed fresco, entitled Justice: a Hemicycle of Lawgivers, can still be seen in situ, when the Great Hall re-opens after the current building works. 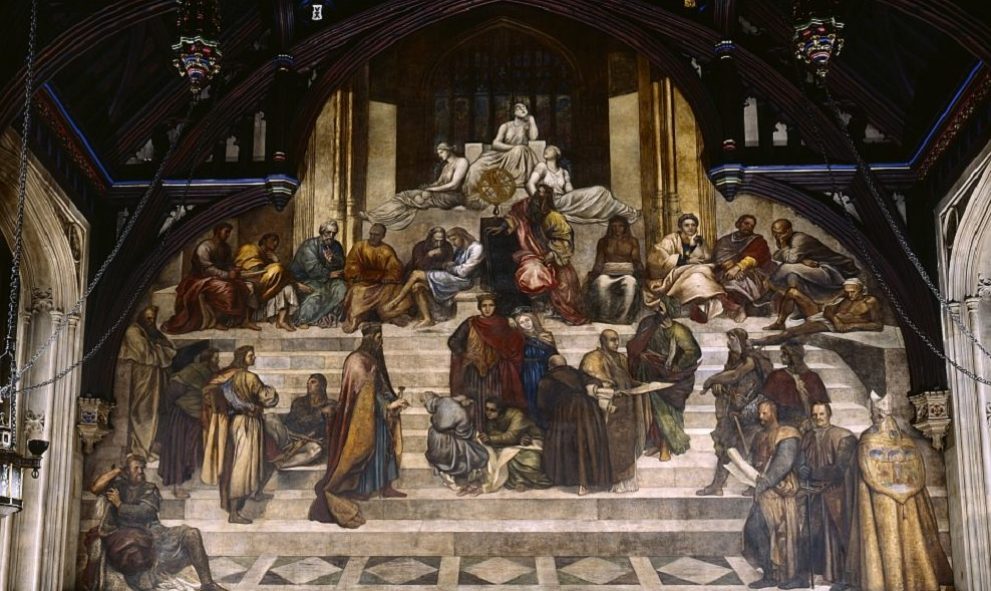