At a Council meeting held on 23 April 1817, it was ordered that ‘the column in the centre of the New Square be taken down as low as the pedestal, and that a handsome gas light be replaced on the same.’

In 1817 New Square looked very different to how it does today. While the view of the buildings has remained relatively unaltered, the square itself has changed in appearance over the centuries. When New Square was completed in 1692, the centre was originally laid down in gravel. In 1696, at the proposal of a member and resident of the Square, Mr Cavendish Weedon, a pillar with a clock on it was added to the scene.

This proposal had been agreed to at a Council meeting held on 20 May 1696. It was ordered ‘that the order concerning Mr Weedon’s proposals be suspended till the first Councill next terme, and that he may proceed only in erecting the pillar and clock &c in Serl’s Court, according to his proposals.’ 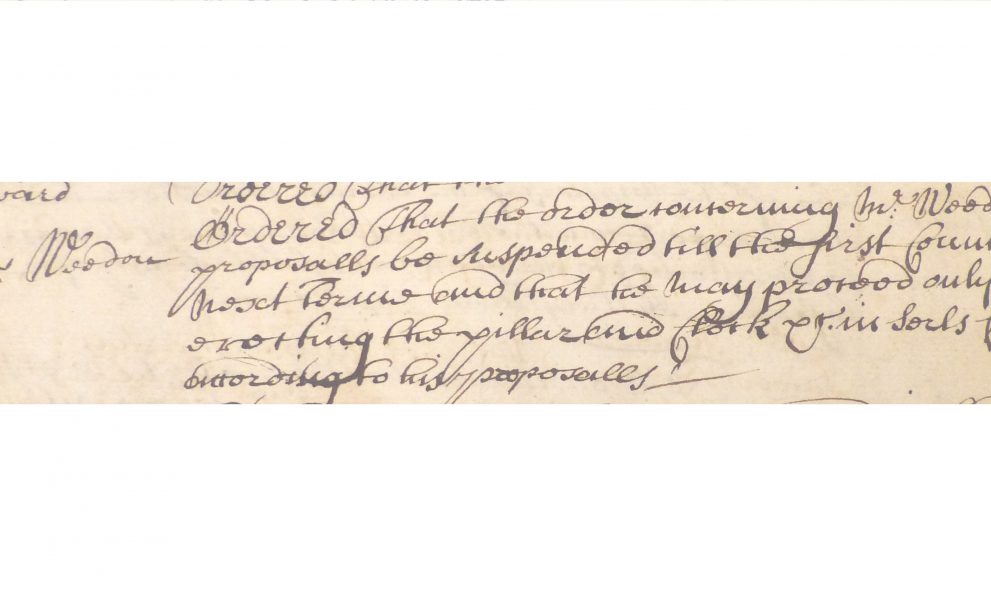 In the second edition of ‘The Student’s Guide to Lincoln’s Inn’ written by the Steward Thomas Lane and published in 1805, Cavendish Weedon is described as having been the first inhabitant of New Square. He is attributed with having ‘contrived the pillar, fountain and other ornaments in the said square; which project he set on foot, by a contribution begun by himself and promoted among his fellow members.’ Cavendish Weedon appears to have been an enterprising gentlemen, he would later appeal for subscriptions for an organ for the Inn’s chapel and also put forward plans for the ‘beautifying of Great Lincoln’s Inn Fields.’ These subsequent proposals, however, were not taken forward.

In 1804 William Herbert described New Square in his book ‘Antiquities of the Inns of Court and Chancery.’ He detailed how, ‘in the midst of this Square, which is covered with gravel and neatly kept, is a fountain (as it is called) consisting of a small handsome column of the Corinthian order from a design of Inigo Jones: the top supported a sun-dial, and the four corners of the pedestal infant tritons holding shells, which formerly spouted water.’

You can see this depicted in a print of 1741, as well as sedan chairs and carriages progressing through the square.

We do not know exactly why the column was taken away, but in May 1816 the Inn had begun investigating the use of gas for street lighting. In May 1817 a contract proposed by the Gas Light and Coke Company for lighting the Inn by gas was accepted. It is likely that the column by this time was redundant in its former purpose, and was therefore considered to be best repurposed for the new technological changes taking place.

The gravel remained in place until further change occurred in 1845. As part of the building of the Great Hall and Library complex, the gardens were landscaped and the look of New Square was changed completely.