Walking the Inn’s precincts after dusk offers a glimpse into a bygone world, with the many gas lamps still in use casting an atmospheric glow by which to navigate.

The interior of the Inn would have originally been lit by candlelight, giving way to oil lamps in the later eighteenth century. In 1813 Friedrich Winzer, a German engineer, created Britain’s first operating gasworks in London. He obtained a charter on 30 April 1812 which gave the Gas Light and Coke Company powers to lay pipes in the streets of London. The charter was granted with the provision that it would be withdrawn should gas-lighting prove not to be cheaper and brighter than lighting by candle. The Government also refused to give the Gas Light and Coke Company exclusive privilege, thereby leaving the way open for additional companies to develop.

The Inn had begun investigating the use of gas for street lighting in 1816. At a Council meeting held on 28 November 1816, it was reported that the Gas Light and Coke Company had quoted that ‘fitting up the 28 existing lamp-posts in the Inn and supplying them with gas will cost £357 14s.’ On 7 December 1816 it is recorded that ‘the annual expense will be for 24 batwing burners at £5 5s, £126 for No 1 burners at £3 3s.’ This resulted in the decision on 19 May 1817 that the contract proposed by the Gas Light and Coke Company for lighting the Inn by means of ‘gas or inflammable air’ should be entered into. So began a lengthy agreement for ‘lighting the ground and buildings belonging to Lincoln’s Inn by gas light.’

In comparison, the move to light the interior of the Inn by gas seems to have been a far lengthier process. This is perhaps, not surprising. By the 1860s gas light was extensively used in the public sphere, especially for street lighting, but its use in domestic settings was less popular. This seems to be largely due to the need for adequate ventilation to prevent the accumulation of sulphur gas. However, more efficient gas fittings and processes were developed during this period, including the introduction of more reliable meters for measuring the amount used by consumers. Additionally several gas acts were passed in the 1860s, including the Metropolis Gas Act of 1860. This Act included the first attempt to introduce a standard measure for energy supply, defining the term ‘candle power.’ This all helped to increase the popularity of gas lighting for Victorian interiors, although it was still not adopted everywhere. In fact, photographs taken between 1890 and 1910 by the architectural photographer Henry Bedford Lemere, show that the interiors of many fashionable hotels and homes were still being lit by candlelight and oil lamps in the 1890s.

A receipt survives in the archive for payment to Messrs Strode and Ledger for gas fittings for the Great Hall and Library, when it was first built in 1845. Therefore, unless this was for exterior lighting, it seems probable that there was some form of gas lighting, or at least provision for it, before 1861. However, as late as December 1861, a joint Finance and Chambers Committee was being put in place to investigate the possibility of extensively lighting the Hall and vestibule with gas by converting the oil lamps currently in use.

Tenders were called for from some of the leading companies: William Strode and Co, Skidmore and Coventry, John Hardman and Co of Birmingham and Joseph Hart and Son of London. These tenders provide a fascinating insight into how the Hall was lit at that time. They record a brief to: ‘alter 12, 3 light oil chandeliers into 6 lights and adapt same for gas.’ The Screen in Hall had two light lamps which were to be altered to gas and in the washing room and the stairs the companies were to provide and fix six brackets for gas. Additionally the music gallery, the stairs to the music gallery, the vestibule, Benchers washing room and the stairs to the offices were also to be included, with costings for proposed gas lighting by six sun burners. The reports observe that the Inn at the time was using colza oil (which was considered the best oil for use in Argand oil lamps) and sperm oil, (known as spermaceti or whale oil) for lighting.

An important part of the tenders was to present the financial savings involved longer term in converting to gas lighting. Mr Mc Kenzie (of Strode and Co) proposed that the new gas hanging lights, if burning from 4-8pm, would consume approximately 2500 cubic feet of gas. The sun lamps in Hall would consume approximately 3700 cubic feet of gas for the same period. According to Mr Mc Kenzie, one of the oil burners in present use ‘gives a light equal to 9 candles each consuming 120 g of spermaceti per hour.’ Whereas gas light in comparison, would give a light equal to ’13 candles per hour.’

Skidmore of Coventry came back to the Inn with no less than five suggested plans, the last two of which are described as, ‘less costly but while they would afford ample light would not develop the characteristic features of the Hall or in their effect promote that dignity, and beauty, the other plans would produce.’ The Company were fully known as Skidmore’s Art Manufactures Company, and they were known for their Gothic Revival style of decoration (as shown in these designs by Francis Skidmore for gas lights held at the V&A).

The Inn’s archives reflect the conflicting interests involved when deciding whether to convert to new technologies. The adoption of gas lighting is not always recorded in detail but we can glean from the references in the Black Books (and the survival of material such as these tenders) that it was adopted gradually and done in consideration of longer term savings. In 1862 it is proposed at a Council meeting of 9 July that every staircase in the Old buildings should be lighted with gas, ‘in a uniform plan under contract with the London Gas Company.’ In 1876 it is recorded that the duties of the third Butler are to include seeing to the ‘extinguishing of the gas light.’ This is perhaps motivated by a desire to avoid additional costs such as the, ‘services of the lamp man to light and extinguish gas during Hilary and Michaelmas terms’, which was proposed as part of the original tender from Strode and Co.

It is an equally drawn out process by which electricity is ultimately adopted by the Inn. On 14 July 1885 a contract for lighting the Hall and Library with electric light is proposed at a cost ‘not exceeding £1300’. However at a Council of 1 March 1921 the use of gas for lighting is still being discussed, with the Treasurer being authorised to carry out the substitution of gas for electricity in the staircases of the Inn, and to refuse to renew the agreement with the gas company. Again this change appears to be motivated by financial prudence, with it being recorded that the gas company are increasing their charging from £728 in 1920 to £1000 in 1921.

Gas-lighting continues to live on in London, with approximately 1,500 gas lamps still in use. They are largely maintained by British Gas engineers, and many have fascinating histories attached to them (in particular the sewer gas lamp of Carting Lane). Today the exterior of the Inn is still illuminated by approximately thirty seven gas lamps. These can be found listed on the Historic England website. Thirteen lamp posts are recorded in the vicinity of the Hall and Library. These are described as circa mid nineteenth century, ‘cast-iron standards in the form of Corinthian columns on granite bases. Octagonal lanterns and single ladder bars’ There are nine lamp posts recorded in New Square as circa nineteenth century, ‘cast-iron lampstandards with fluted or octagonal shafts. Bracketed lanterns of Windsor type, some with ladder bars’. Lastly there are fifteen lamp posts recorded in the vicinity of Old Buildings and Stone Buildings, noted to be circa nineteenth century, ‘cast-iron standards, some fluted with lanterns of Windsor pattern.’ 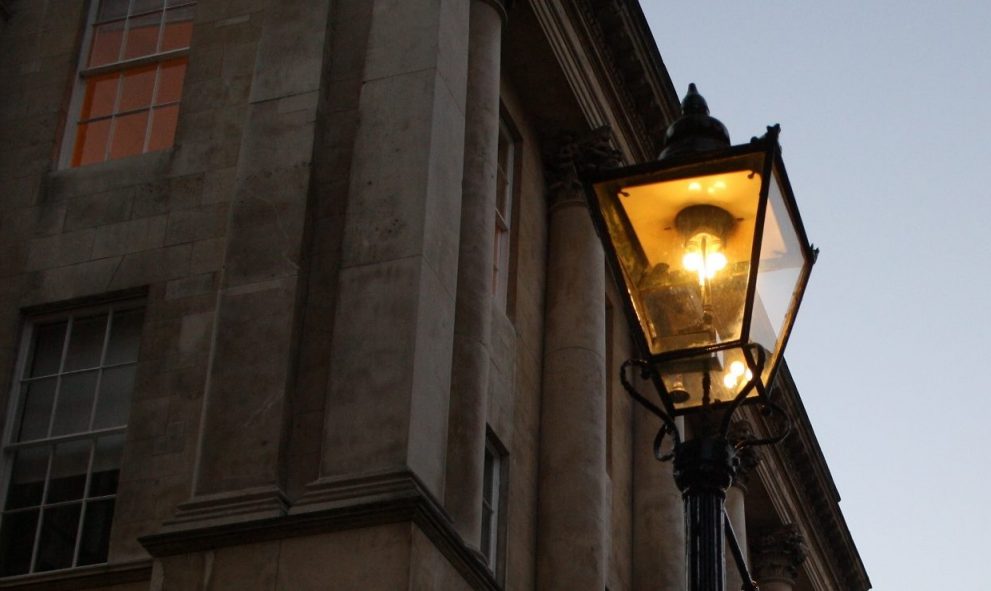