January is usually the time of year when we attempt New Year’s resolutions, and dietary restraint, after having enjoyed the culinary delights of the Christmas season.

The Inn has always provided excellent dining facilities for its members throughout term time, although the way in which it has administered this has changed substantially over the years.

The provision of catering for the dinners in Hall had long been a cause of concern for the Bench. The Black Books record repeated complaints from members of the Bench, and the Bar, regarding the quality of the meals, and the concerns of the Bench regarding the cooks or expenditure. The challenges of providing catering which would please everyone, could handle the demands of providing for hundreds one evening versus very few the next, and ultimately did not incur large losses, proved difficult to meet.

A Committee appointed in 1847 produced a report which highlighted the complicated system which was in operation at the time. The Cook was employed as a purveyor and so was responsible for procuring all provisions as well as supplying dinners from the kitchen for the Bench, Bar and Students’ tables, in messes of four, at a fixed price. In addition to this, substantial supplementary payments were made for what were known as ‘exceedings.’ These costs were then claimed by the Cook and other external purveyors. The Committee came to the conclusion that large savings could be made if meals were provided by the Cook at an inclusive price, with any additional provisions ordered in the future by the Treasurer, and paid for by the Steward.

In the period 1845-1873 five men successively took on the role of Cook. In 1873 George Samuel Elliott succeeded Thomas Simon Nicholes as Cook and Purveyor. Under his contract the Society provided cooking utensils, carriers to convey the dinners from the kitchen to the Hall and waiters. In return the Cook arranged for the provision of fuel, food and kitchen staff and provided meals at set prices during term time, with any remainders of supplies being his. A termly bill of fare is given for each type of table, and for Grand Days. 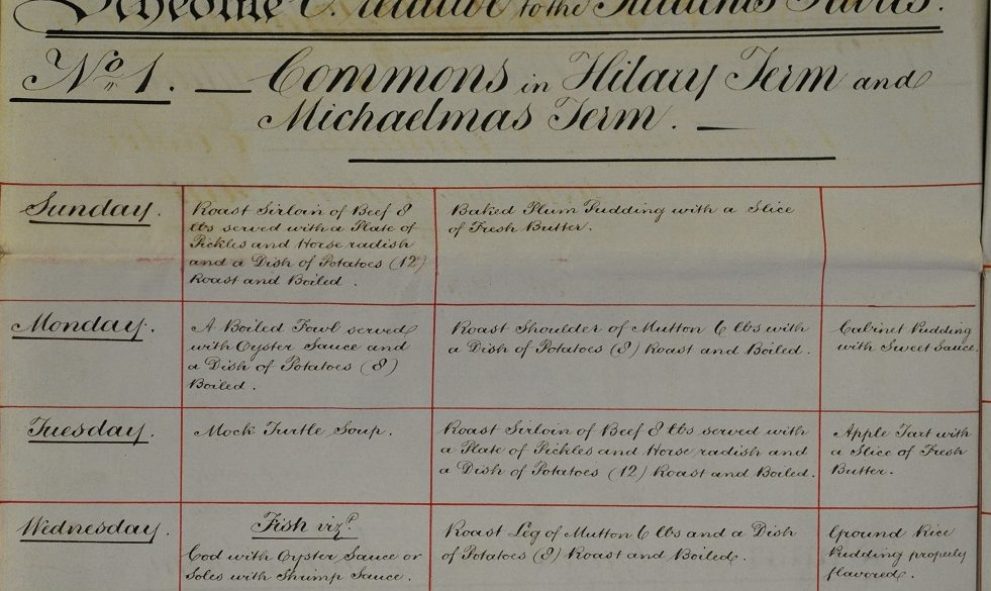 The bill of fare provided at the Inn during term time seems to have remained relatively unaltered over the years. Plum pudding, for example, had long been a staple dessert and in the Black Books for 1748 a bill of fare recorded for the Easter term includes the same Sunday menu of beef, pickles and ‘baked plumb pudding’ as that which is described in the Students’ tables menu from George Elliott’s contract in 1873 (pictured above). 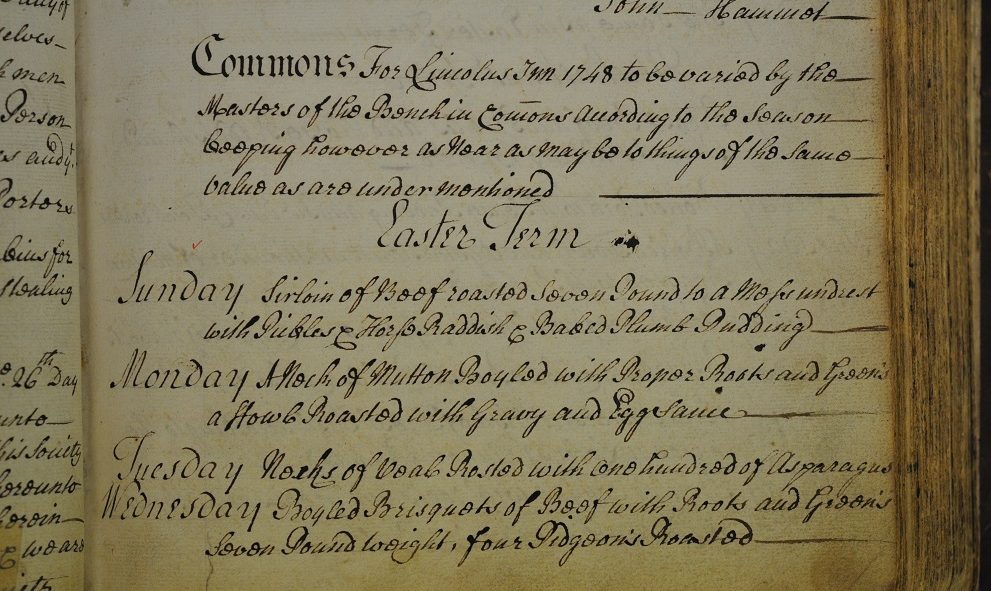 The scheduled menu given for the Students tables includes dishes similar to those recorded for Commons in earlier accounts, including ‘boiled fowl’ and ‘roast leg of mutton.’ Desserts include ‘cabinet pudding’ and ‘ground rice pudding properly flavoured.’ ‘In the accounts for November 1807 we can see the provisions for Commons includes the repeated staples of ‘fish and loins of mutton’; ‘soup Bouille and roast veal’; ‘roast beef and apple pies’ and ‘boiled fowls.’ 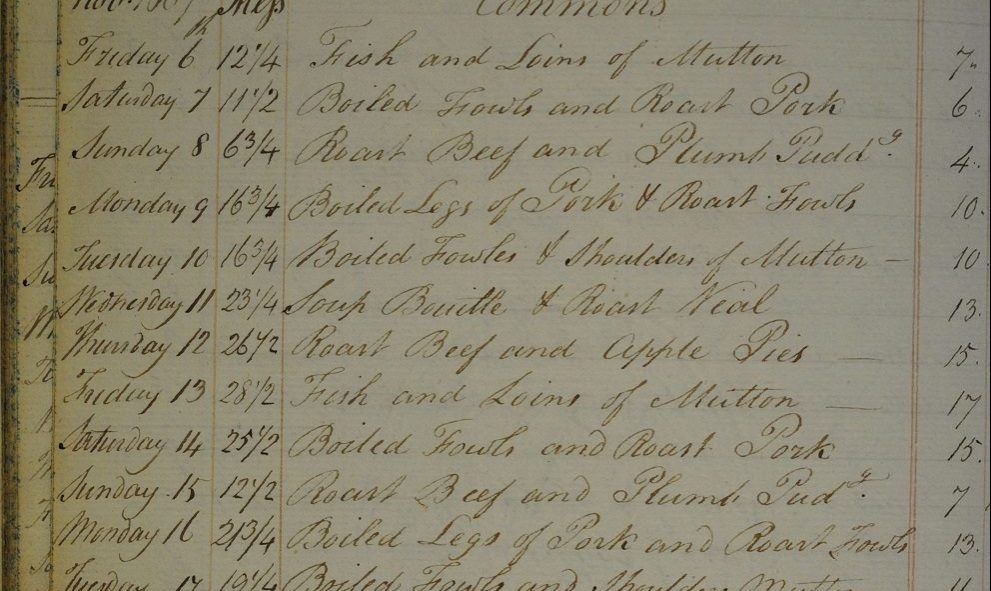 The exceedings listed for the same year give us an idea of the menu for special occasions such as Grand Day which included dishes such as ‘crimp cod’; ‘calves head mashed with bacon’; ‘wild ducks’ and ‘ragout sweetbreads.’ 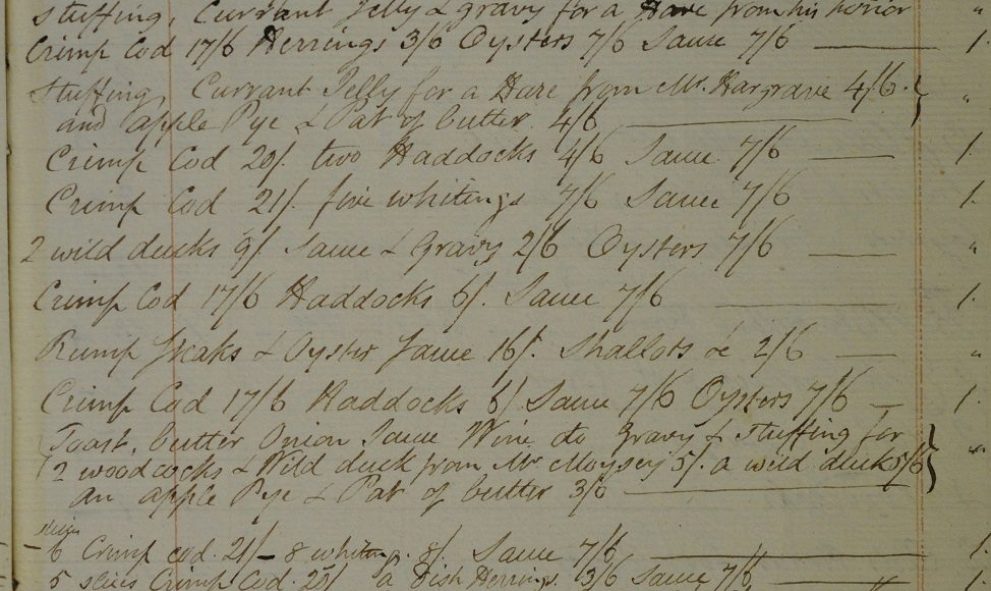 The bill of fare given in Elliott’s contract for the Bench table includes ‘soup, fish with sauces…game, fowl and sweets’ as well as oysters before dinner. For Grand Days in Hilary and Michaelmas terms the luxury of a turtle was added. Both the Bar and Students’ tables for Grand Days in the Hilary and Michaelmas term benefited from dishes such as  ‘cod fish with oyster sauce, a roast turkey (stuffed) and sausages’ and a ‘large mince pie.’ 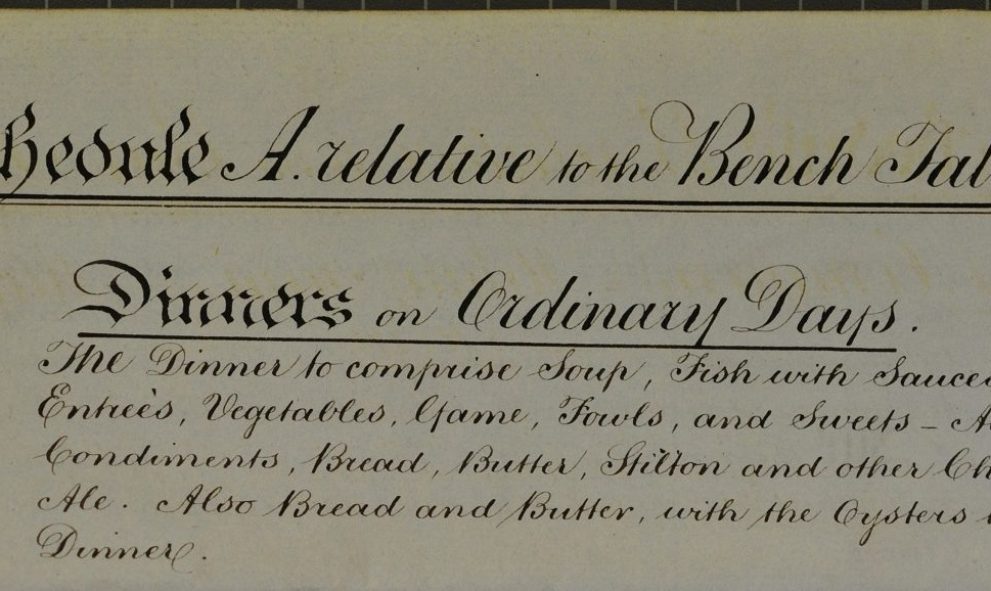 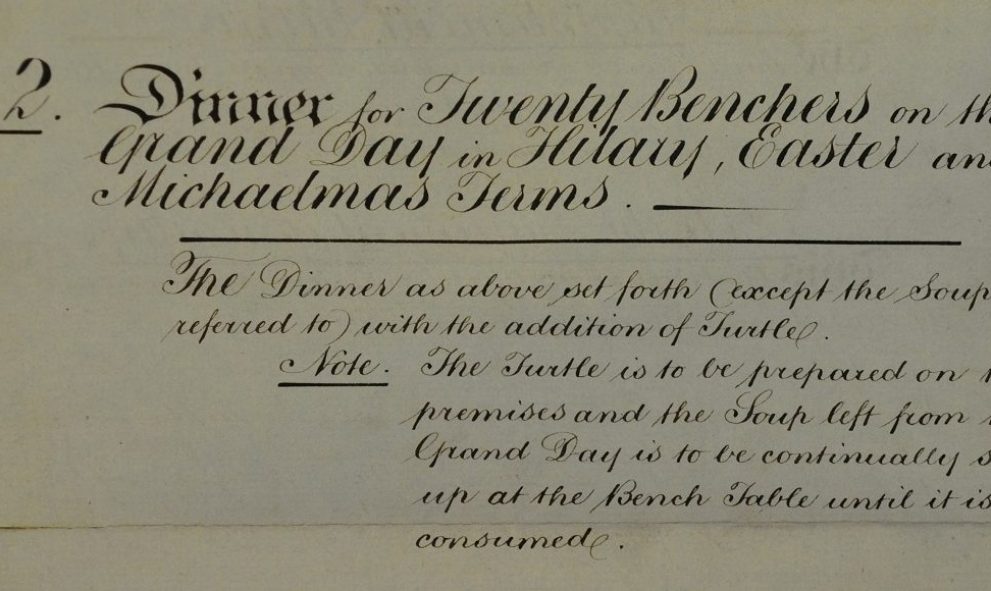 However this arrangement still proved difficult to finance and in 1889 the total cost paid by the Inn to fund dinners in Hall (above the amount paid by members and not including the cost of wine), was calculated to be about £1000. In 1890 a detailed investigation was carried out and as a result it was ordered that no more dinners should be provided for the Bench on Saturdays or Sundays without previous notice, that private guest nights should be introduced, the Bench dinner simplified (except for Grand Days and Council days); and that the Bar and Students’ tables should be served the same and on a table d’hôte system, rather than messes. Consequentially the employment of Mr Elliott was terminated at the end of the Trinity term 1901, and a new scheme for the management of the Catering department was introduced.