This month marks 100 years since women gained the right to vote. In celebration of this, this archive of the month post looks at Christabel Pankhurst, and her attempt to be admitted to the Inn.

The Representation of the People Act was passed on 6 February 1918, giving certain women over the age of 30, the right to vote for the first time. This victory had come after a long campaign to secure women’s suffrage. Over the years, supporters of women’s suffrage had employed a range of tactics, from the presentation of petitions, to more aggressive actions.

There were two main divisions to the movement. The suffragists believed in peaceful means of protest and established themselves in the mid nineteenth century. In contrast, the suffragettes, advocated more militant actions, and emerged in 1903. Christabel Pankhurst, daughter of Emmeline Pankhurst, was a key figure in this movement, helping to found the Women’s Social and Political Union (WSPU) on 19 October 1903 to campaign for votes for women.

Not long after this, in early 1904, Christabel Pankhurst contacted Lincoln’s Inn and requested to be admitted as a member. In the autumn of 1903 she had enrolled in a law degree at Manchester University and so her desire to join the Inn was not surprising. Women had been admitted to undergraduate lectures in law at University College since 1871 and women’s colleges had been set up at Cambridge in the early 1870s (Newnham College in 1871 and Girton College in 1872). There was, however, no corresponding sense of obligation to admit women to the Inns of Court. The Sex Disqualification (Removal) Act was ultimately passed at the end of 1919, widening employment opportunities for women and enabling them to become barristers, solicitors, jurors and magistrates. Prior to this, however, the Inn showed no signs of breaking with convention and consistently refused the women who were brave enough to petition for admission.

Christabel Pankhurst’s petition is one of the first recorded attempts by a woman to be admitted to Lincoln’s Inn. At a Council meeting, held on 11 January 1904, her petition was put before Council. In her letter she recalled how she had previously applied to the Steward of the Inn on 2 January to enroll as a member. On 7 January she had received a reply from the Steward, ‘informing me that as female students have not hitherto been admitted to the said Society, it would be necessary for me to approach the Masters of the Bench by petition…I humbly pray that I may be heard by the Masters of the Bench.’ The minutes of the Council meeting note simply that she ‘was refused.’ 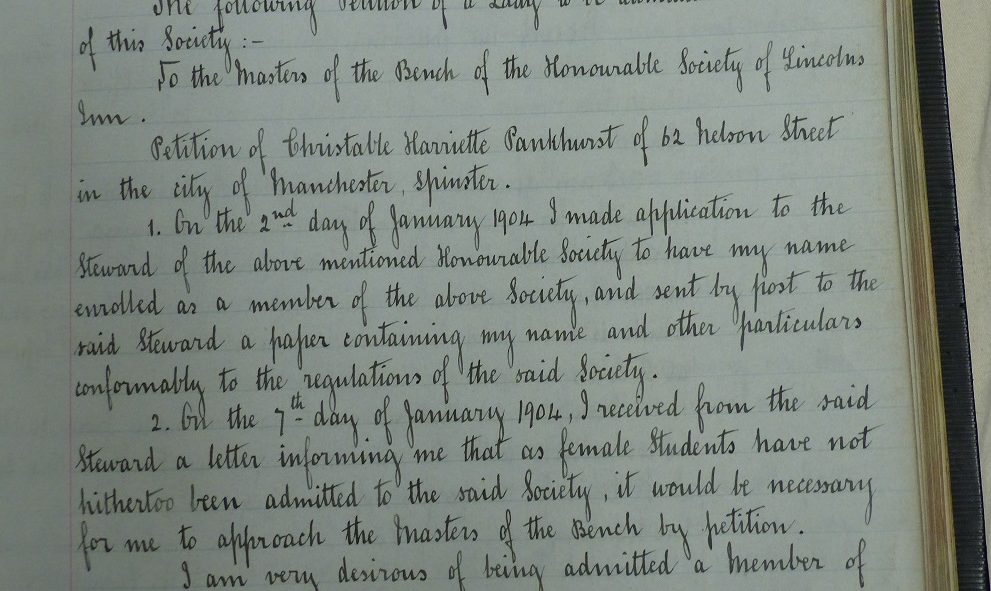 The choice of Lincoln’s Inn may have been due to her father’s connection with the Inn. Her father, Richard, had been a member of Lincoln’s Inn and had been called to the bar in 1867. He had died unexpectedly in 1898, and following his death the family, who had been living in London, moved to Manchester.

Despite the Inn’s rejection Christabel Pankhurst went on to graduate with first class honours in 1906. During her time at Manchester University she was the first, and only, woman law student.

In November 1918, following the passing of the Representation of the People Act, the Parliament (Qualification of Women) Act was also passed. This allowed women to stand as candidates to become members of parliament. In December Christabel Pankhurst stood as the Women’s Party candidate for the constituency of Smethwick, but lost by 775 votes.

In 1936 Christabel Pankhurst was included in the New Year honour list, and was created a DBE in recognition of her services to women’s suffrage. After her death in 1958, a bronze relief commemorating her contribution to the fight for women’s right to the parliamentary vote was added to the low wall surrounding the base of the statue of her mother, which had been unveiled in 1930. The memorial stands at the entrance to Victoria Tower Gardens, near the Houses of Parliament.