This month marks the anniversary of ‘the Great Escape’, which took place on 24 March 1944, from the German prisoner of war camp Stalag Luft III.

An insider’s account of the escape was written by Paul Brickhill and published in 1950. Much of the book focused on Royal Air Force Squadron Leader Roger Bushell, also known as ‘Big X’, including his capture, early escape attempts, and his master minding of the escape itself.

Bushell is described in the Inn’s admission register as being ‘of Pembroke College, Cambridge and of Springs, Transvaal, South Africa (aged 19), son of Benjamin Daniel Bushell of Springs aforesaid, mining engineer.’

Roger Bushell was clearly intent on practising law, and he went on to be called to the bar on 9 November 1934. His signature appears in the Inn’s Bar Book.

His petition and declaration for call, dated 6 November 1934, also survives in the Archive. It notes that he had been a pupil of ‘Harry’ Willink (Henry Urmston Willink) of 3 Essex Court, Middle Temple, from April to September 1933, and then of Geoffrey Dorling Roberts of 1 Temple Gardens, Inner Temple from September 1934.

During this time he continued his career in the RAF, having been commissioned on 10 August 1932; promoted to flying officer on 10 February 1934 and flight lieutenant on 20 July 1936; whilst also furthering his legal career. The published Law List shows that from 1935 Bushell remained in chambers at 1 Temple Gardens and practised on the South Eastern circuit, and at the Central Criminal Court at the Old Bailey. He was apparently later appointed to military cases and was involved in prosecuting RAF personnel charged with various offences, such as dangerous flying.

Bushell was given command of No. 92 Squadron in October 1939. His promotion to Squadron Leader was confirmed on 1 January 1940. During the squadron’s first engagement with enemy aircraft on 23 May 1940, whilst on a patrol near Calais, he was credited with damaging two Messerschmitt Bf 110 fighter aircraft of ZG 26 before being shot down and captured by enemy forces. He was sent to Dulag luft transit camp near Frankfurt as a prisoner of war.

At the camp Bushell made several escape attempts before he was ultimately moved to Stalag Luft III. It was here that he became head of the escape committee which formulated a plan to help two hundred prisoners out of Stalag Luft III via three tunnels.  This was an ambitious plan, especially as escape attempts were usually limited to smaller numbers. Bushell apparently gave inspiring speeches to encourage the men, possibly the most famous being recorded as:

“Everyone here in this room is living on borrowed time. By rights we should all be dead! The only reason that God allowed us this extra ration of life is so we can make life hell for the Hun… Three bloody deep, bloody long tunnels will be dug – Tom, Dick, and Harry. One will succeed!”

Seventy-six men were successfully led out of one of the tunnels on 24 March 1944, before the escape attempt was discovered. Seventy-three of the men were recaptured.

A film of the Great Escape was made in 1963.  Much of the true story was altered for the screen and in the film Roger Bushell was renamed Roger Bartlett, with the character being played by Richard Attenborough.

Roger Bushell was 33 years old when he died. His name can be seen on the Inn’s War Memorial in New Square. 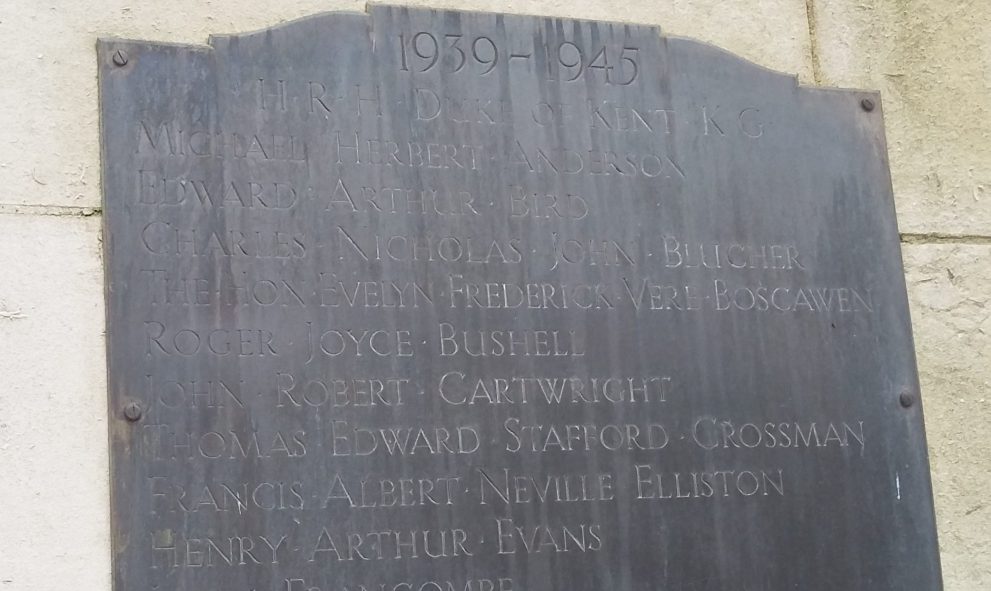