The seventeenth and eighteenth centuries saw an explosion in numbers of coffee houses in Britain, particularly in London, and Lincoln’s Inn was no exception.

In the Inn’s records there is an entry in 1704 referring to the ‘Coffee-house room in Serle’s Court’, ie. in what soon became more commonly known as New Square.  Many decisions of Council relating to Serle’s Court, which was developed and built under an agreement with Henry Serle made in 1682, were transcribed into a separate series of records, Serle’s Court Books (Archive ref: E2a/1-2), rather than into the Black Books, the main series of minutes of Council, though the printed edition of the Black Books as in this case includes selected extracts from them.  Although the earliest express record to the coffee house, the entry clearly implies that it had been in place there before 1704 – doubtless before the Inn provided its own facilities such as the ‘Refreshment Room’ and now the MCR it was a useful amenity.  Details gleaned from the Serle’s Court Books show that by the mid-eighteenth century Serle’s coffee house, as it had become known, was based on the ground floor of 3 New Square, at the south-east corner of the square next to Wildy’s archway. Until about 1760 it was on the right hand side as you go in the door and from 1760 in the rooms directly ahead as you go up the steps. In addition to the coffee house, there is also a mention in 1722 of there being a brewery in the basement of the building used by the then proprietor, Mr Hart. In addition to selling coffee, coffee houses also sold alcohol and served food, explaining why Mr Hart had a brewery in the basement.

Despite the reasonable number of documents in the Archives relating to 3 New Square, unfortunately deeds and documents relating specifically to the coffee house are entirely lacking. It is only by descriptions in documents for other rooms and chambers in 3 New Square that we know the location of the coffee house, whereby those rooms or chambers are described as being adjacent to, above or below the coffee house. The image bellows shows one of these documents. 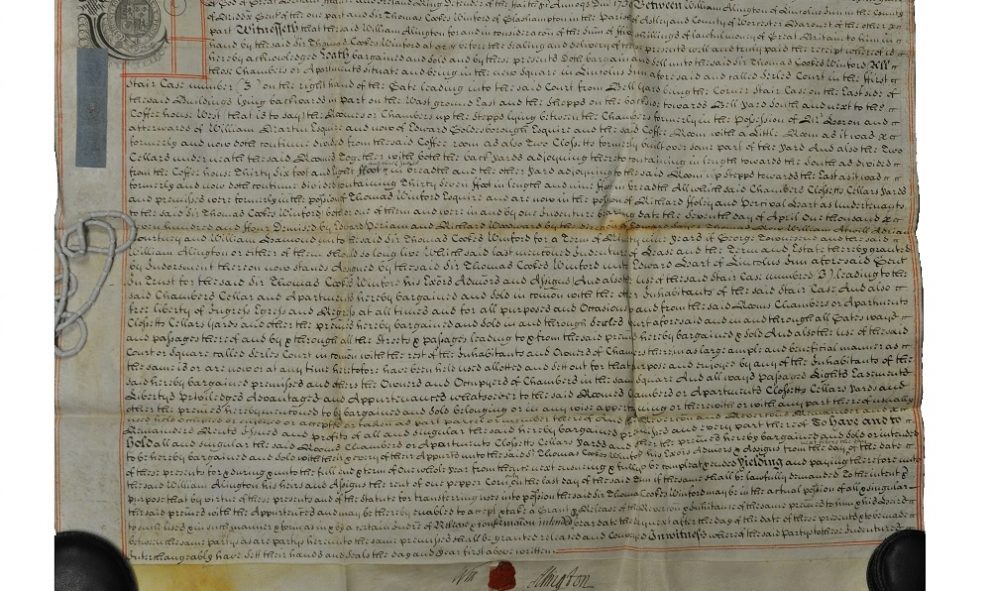 Equally as unfortunate is that we have no plans or drawings of the interior in the Archives.  Nonetheless, an interesting legal source sheds unexpected light, namely witness statements given in proceedings at the Old Bailey, which are now available online – it is apparent that coffee houses as busy public venues were ripe for criminal attention, and Serle’s coffee house was no exception.  From one such case – of petty theft – heard on  30 November 1831, we discover that the coffee house served ale, that the room was open to the public and not just members of the Inn, that it was subdivided in to boxes or booths and that a table was in the centre of the room on which silver cutlery was kept. I imagine the room would have looked something a bit like this drawing of Lloyd’s coffee house. 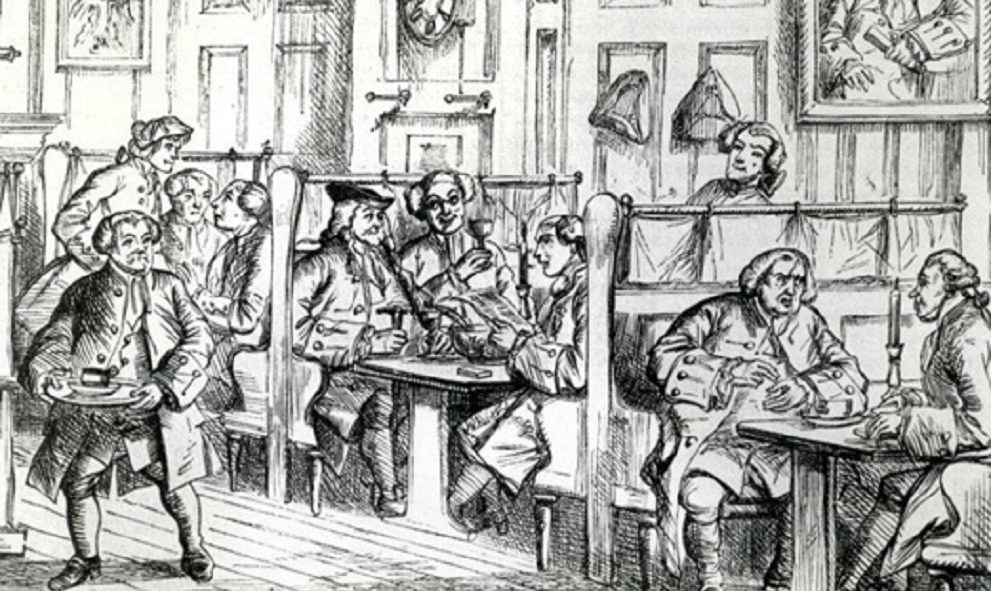 Other entries from the Old Bailey proceedings also show that the coffee house played host to musicians from this description of an Italian guitarist who performed at the coffee house, drank too much and was subsequently robbed

Similarly there is little description of the patrons of the coffee house, although Richard Steele, writing in the Spectator magazine on 26 April 1711, gives his impression of the men who frequented it at that time. The image below shows that entry in the magazine and includes the fantastic description of their clothing – ‘Cap and Slippers, with a Scarf and Party-coloured Gown’. Please use the gallery below to view images of the whole article.