On 22 January 1901, Queen Victoria died after 63 years on the throne. She was 81 years old and had been on the throne more than six decades.

She died after weeks of ill health, with her son and heir Edward VII, and her grandson Emperor Wilhelm II of Germany at her deathbed.

(The image above is: Queen Victoria by Bertha Müller, after Heinrich von Angeli oil on canvas, 1900 © National Portrait Gallery, London)

At a Council meeting held on 19 February 1901, it was ordered that the ‘following address to the King which was prepared by Sir Andrew Scoble KCSI and signed by the Treasurer be recorded in the Black Book.’ The address was written to offer the new King Edward VII, the Inn’s ‘respectful and heartfelt condolence’ on the death of the Queen.

Before our current Queen, Queen Victoria had been the longest reigning British monarch, reigning for over 63 years during a period of great social and technological change. The nineteenth century also saw a vast expansion of the British Empire, and from 1877 Victoria was known as Empress of India.

During her long reign, Victoria suffered numerous serious attempts on her life. The first occurred on 10 June 1840, when Edward Oxford fired two shots at the Queen and the Prince as they were driving up Constitution Hill.  The carriage momentarily stopped, but Prince Albert urged the driver to drive on quickly. Edward Oxford was apprehended and handed over to the Police.

On hearing of this first assassination attempt, the Inn recorded at a Council meeting held on 18 June 1840 that ‘A committee was appointed to prepare addresses of congratulation to Her Majesty and Prince Albert upon the occasion of the late atrocious attempt upon their lives.’

At the next Council held on 27 June, it was reported that two addresses had been submitted and approved, one to the Queen and one to the Prince. 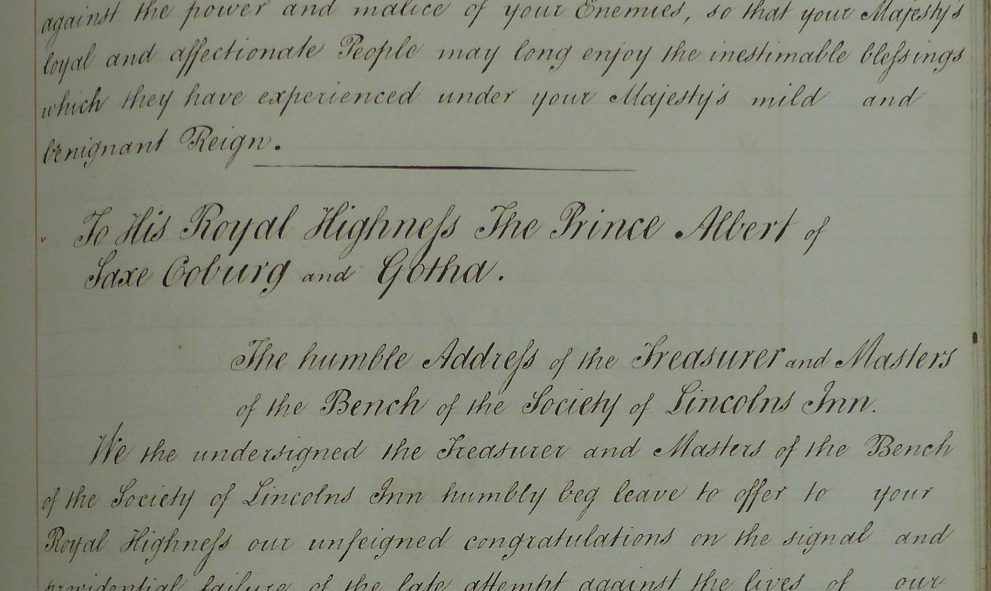 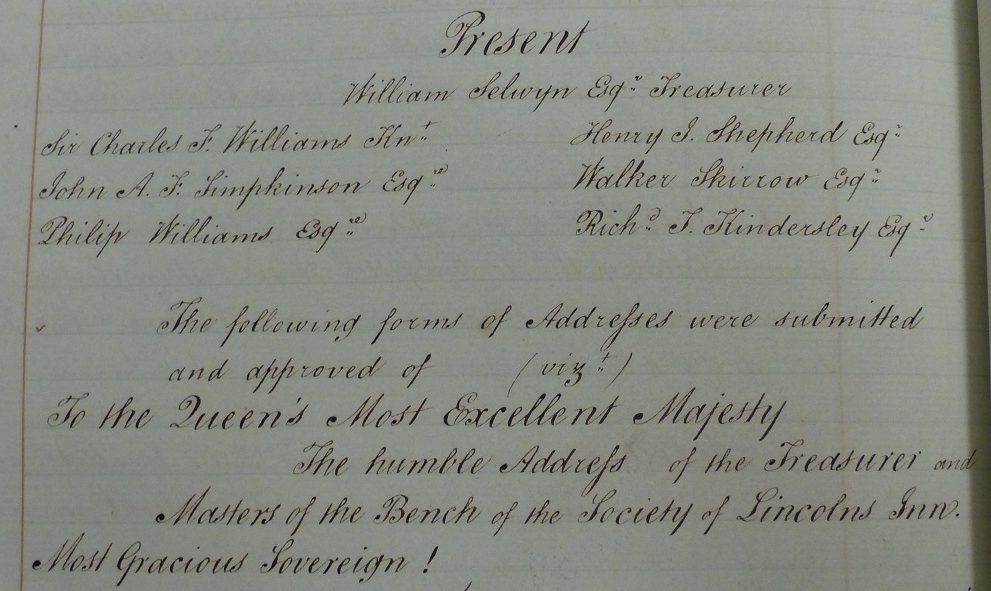 Addresses to the Queen and the Prince, 1840
No caption

This event had occurred just a few months after the marriage of Queen Victoria and Prince Albert had taken place, on 10 February 1840. In the archive there survives a ‘List of the Members of Lincoln’s Inn that Dined on the day of Her Majesty’s Marriage, in the Hall, Council Room, Vice Chancellor’s Court, and the Vice Chancellor’s Private Room.’ 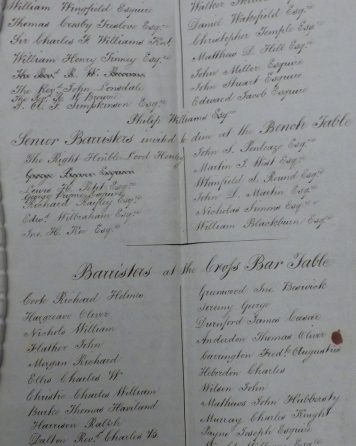 Edward Oxford was later imprisoned, although he was acquitted of the charge of high treason on grounds of insanity.  He proved to be the first of many to target the Queen while she was driving in her open-top carriage. During her long reign she escaped several more assassination attempts while riding in her carriage in 1842, 1849 and 1872.