Even though the Great Hall and Library building was opened in 1845, by November 1868 a report presented to Council recognised that the Library was in a ‘crowded state’ with not enough room for the ever growing collection of books.

By 1870 a resolution had been passed by Council to extend the Library at a cost not to exceed £3000. To enlarge the original building by Philip Hardwick, the Inn employed the services of the architect George Gilbert Scott who drew up his designs for the project. He presented 22 drawings to be considered by Council, of which five survive in the Inn’s Archives. These can be viewed by clicking on through the gallery below. 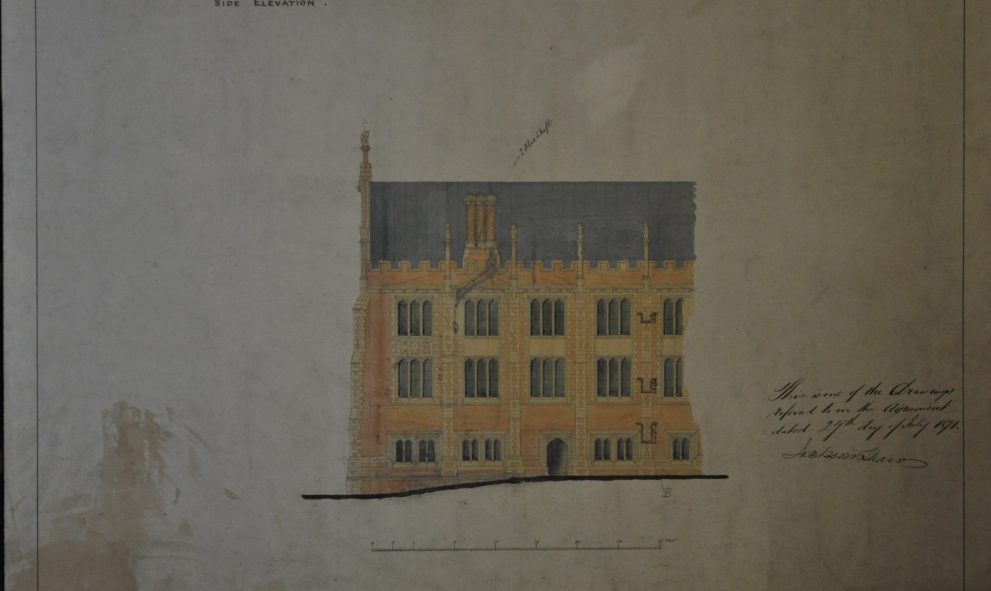 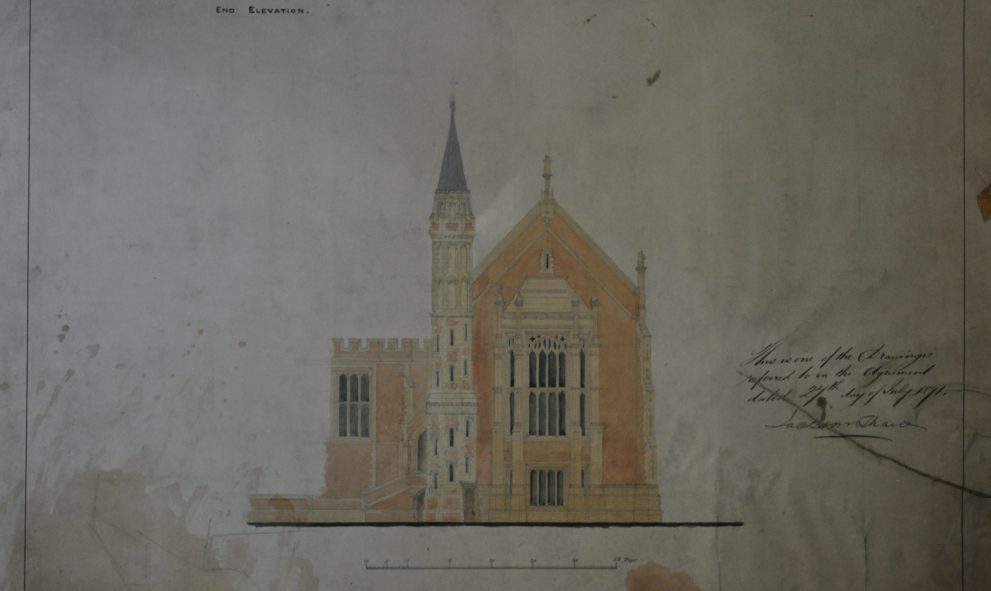 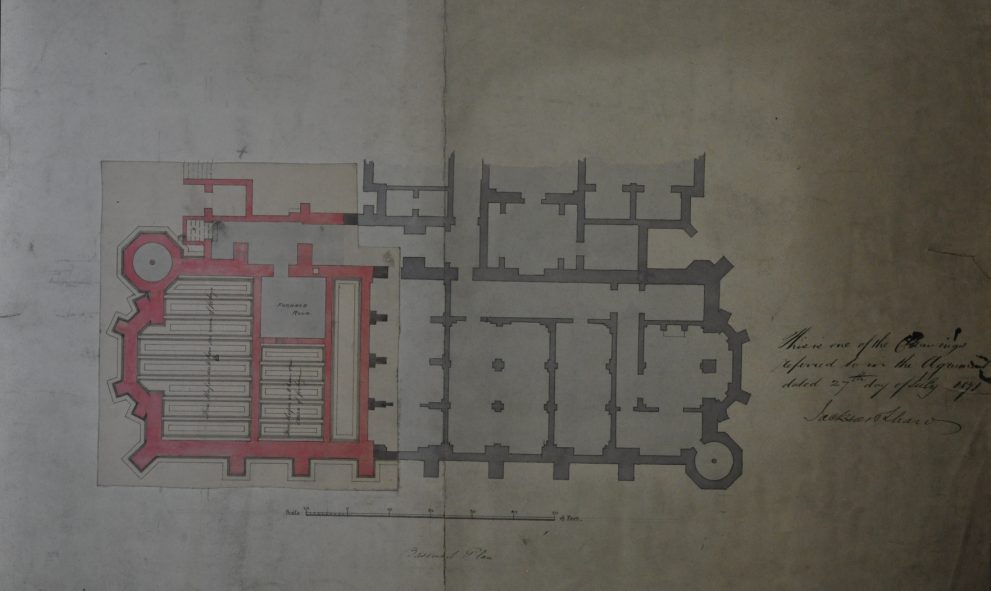 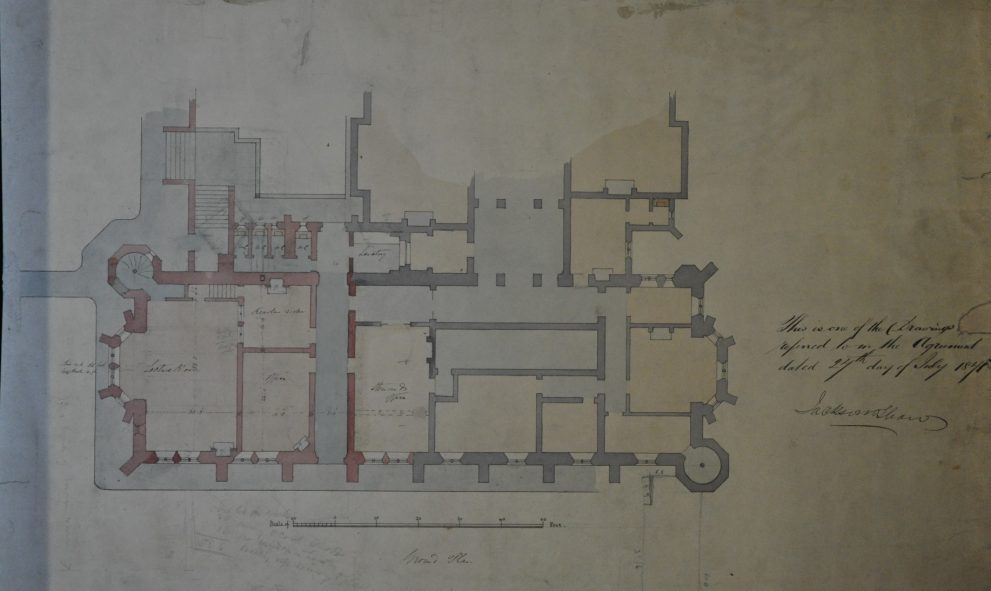 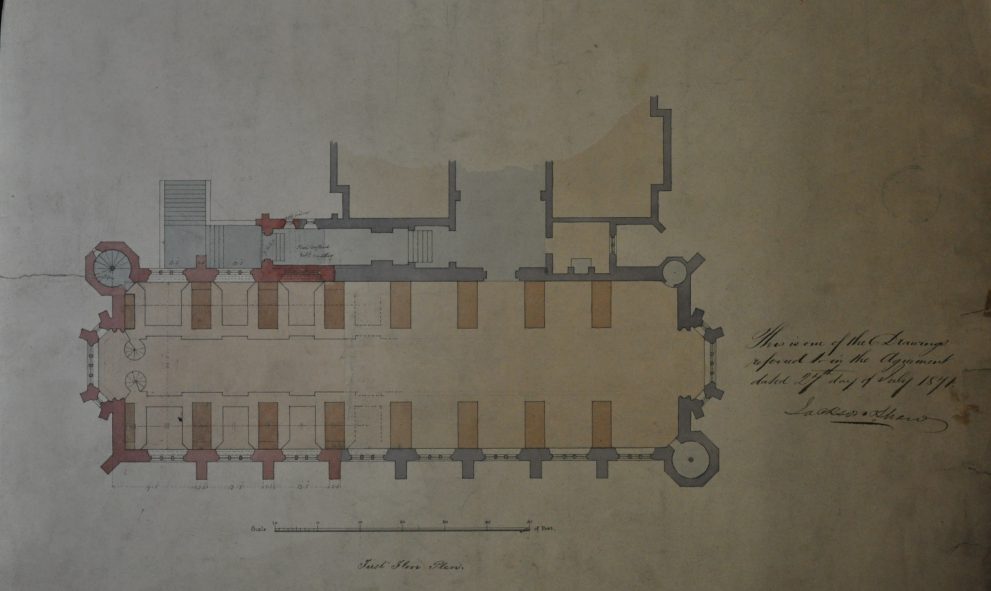 Despite answering the Inn’s request to design something that would address the issue of space and complement the existing architecture, Scott pointed out that the designs could not be executed for less than £8,000. Unfortunately, this was deemed too costly for the Inn and so, initially, on the 25 November 1870, the idea of an extension was abandoned. An alternative scheme by William Webster was presented to Council suggesting how the existing basement area of the Library could be altered to create extra storage for books but it was decided this would be insufficient for the Inn’s needs. Coincidentally, Webster had worked with Scott on various projects and was responsible for carrying out work on the Chelsea, Albert and Victoria embankments. Following the apparent lack of suitable alternatives to Scott’s original plan, Council reversed their decision on 12 June 1871 and agreed to press on with Scott’s designs for an additional three bays. The contract was signed on 27 July 1871. 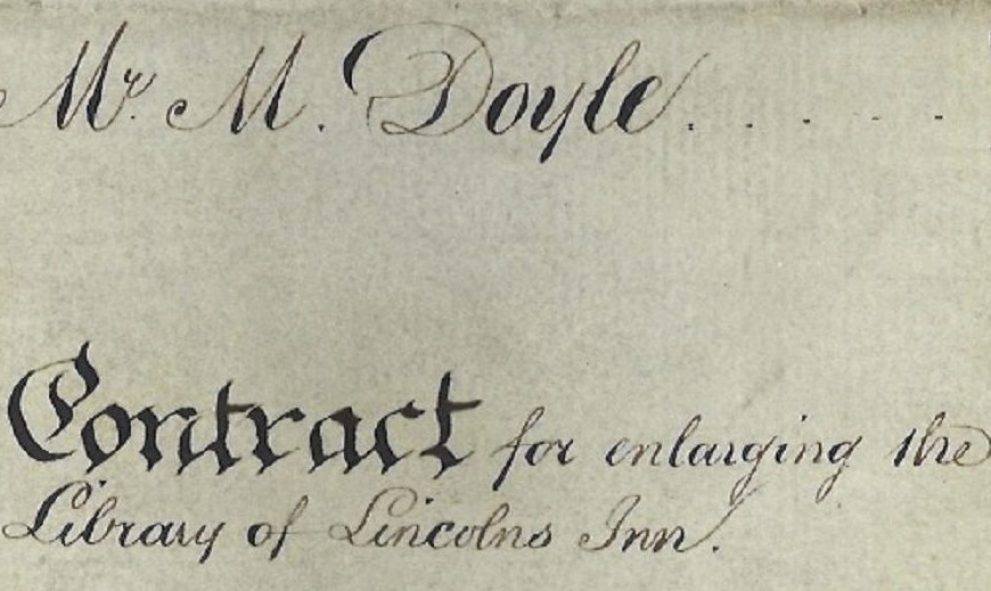 A specific Library Building Committee was established for the duration of the project and consisted of Sir William Milbourne James, Edmund Beckett Denison, Evelyn Bazalgette, Richard Amphlett, John Hide, John Palmer, Thomas Webster and Robert Smart. Of course one of the names in this list of particular interest is that of Edmund Beckett Denison, later Baron Grimthorpe. Grimthorpe was heavily involved in the extension to the Inn’s chapel in 1882 but fortunately his controversial plans to demolish the Inn’s gatehouse on Chancery Lane were disregarded. Grimthorpe apparently also suggested he was responsible for the design of the Library extension, although the Library Building Committee minutes suggest he was more a bystander and had no direct role influencing the designs. When consulting the Library Building Committee minutes in conjunction with the associated annual accounts for the early 1870s, it becomes apparent that the completion of the interior of the Library following the enlargement was not finished until July 1873, the main cause of delay being the replacement of faulty iron walkways installed as part of the works. The final payments were not made until August 1874 with this extract from the Inn accounts showing that the whole project cost the Inn £11876 1s 4d. 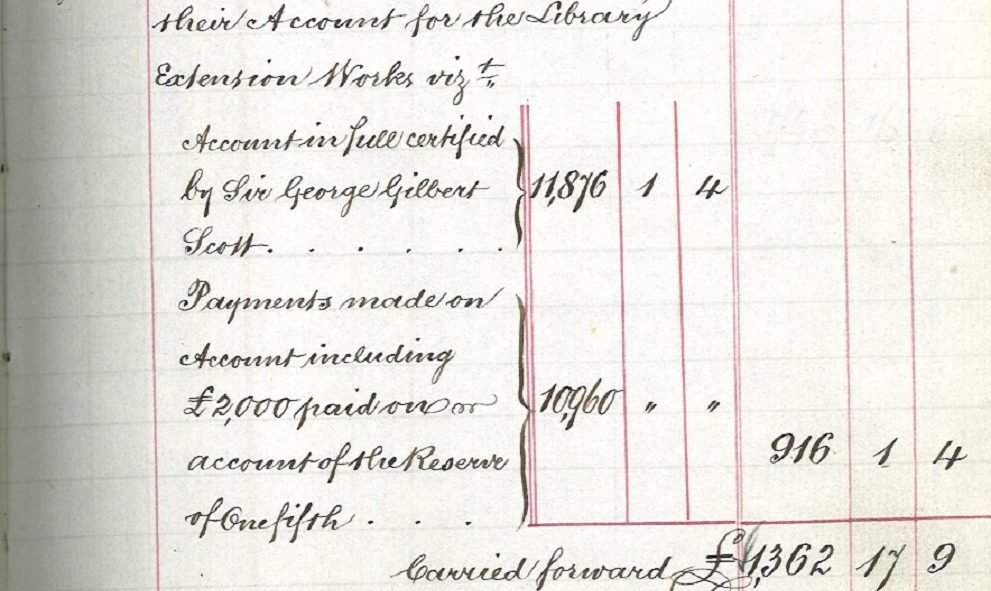 As can be imagined, the construction of this extension involved a huge amount of labour, cost and materials. In addition to Scott as the architect, Jackson and Shaw, who had also worked on the old Public Records Office building on Chancery Lane (now the King’s College London Library), were employed as the builders, John Kaberry, the Inn’s resident Clerk of Works, and a surveyor called John Lee were all employed to oversee the main project. Other companies involved with the project included Strode and Company who dealt with the gas lighting for the Library, Treloare and Sons who supplied ‘cocoa and nut matting’, Thomas Potter and Sons delivered the heating with a company called Caldecott dealing with the upholstery of Library furniture. The change in the outward appearance of the Library that was only made possible through their combined hard work, can be seen by comparing the nineteenth century print and twenty first century photograph. 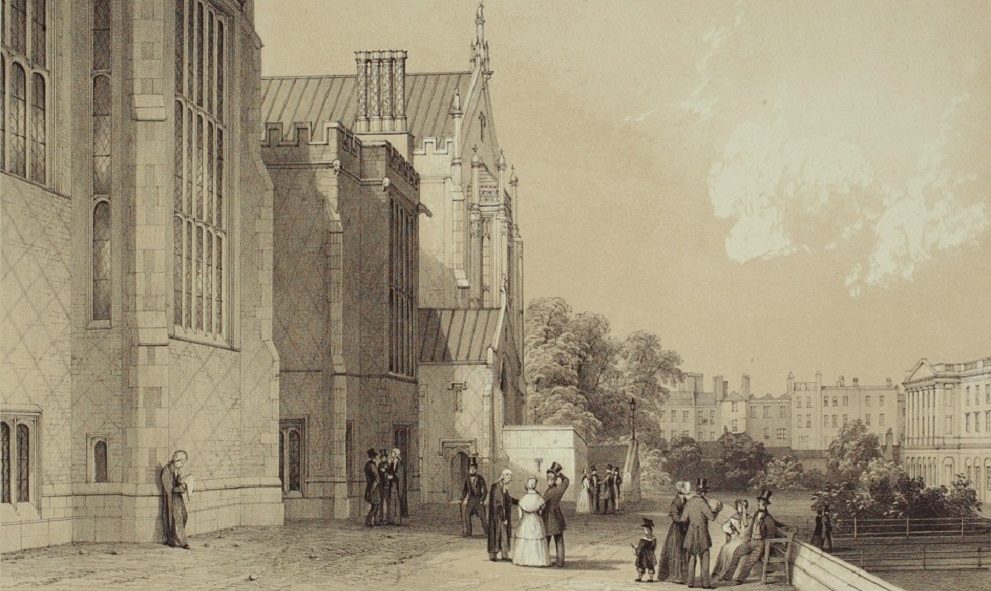 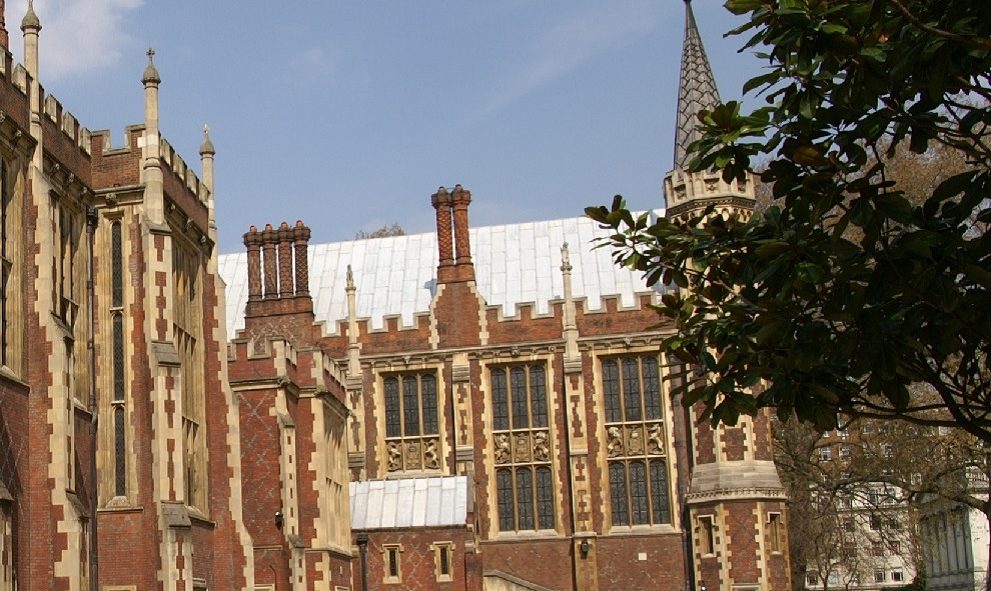 Library before
Library after