In June 1780 some interesting entries, relating to the payment of certain bills, occur in the Black Book.

At a Council held on 29 June 1780 it is ordered that ‘several tradesmen’s bills for provisions, wine &c, for the Northumberland Militia, amounting to the sum of £364 12s be paid.’

This is followed by subsequent orders for the porters to submit their costs for their employment ‘during the late troubles’, and that the rooms where the Militia have been staying be ‘cleaned, whitewashed and painted when they are gone.’ 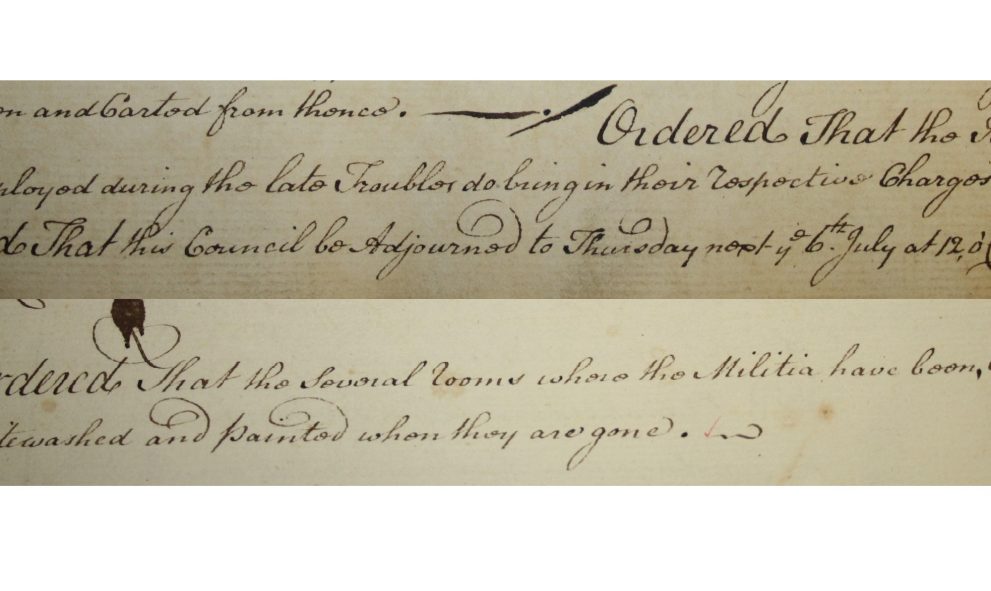 The Inn’s accounts for the years 1780 and 1784 also have some intriguing entries. In particular, a record for £2 2s 8d ‘for muggs to replace in the room of them broke by the militia during the late turmoults’ appears in 1780, while the accounts of 1784 include bills ‘for the use of fire arms during the riots of 1780.’ 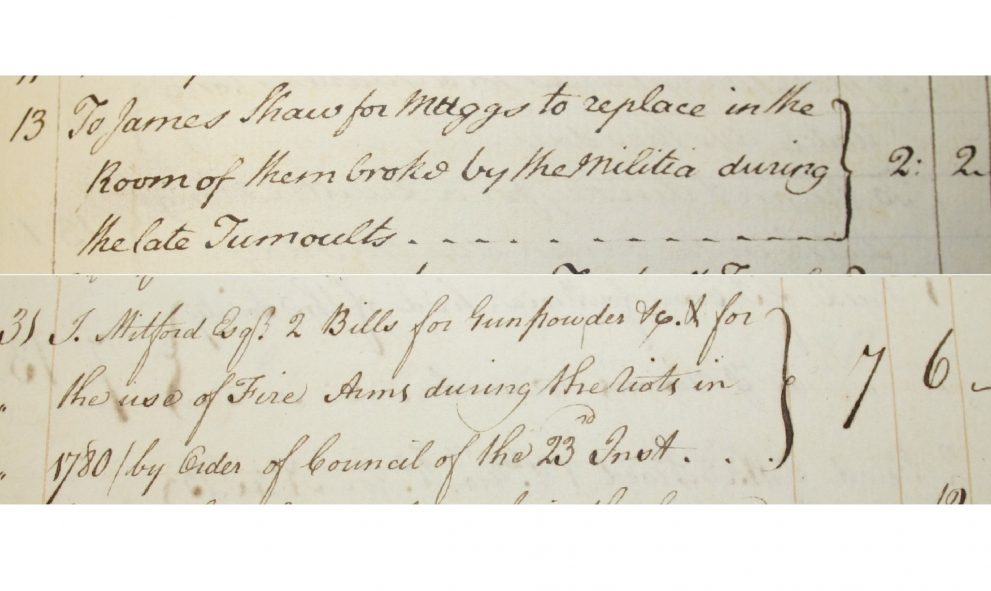 These entries would be easy to overlook, however we know that June 1780 was a chaotic time in British history, due to the breakout of the Gordon Riots. During 2-9 June 1780, the Gordon Riots devastated large parts of central London. According to the poet William Cowper they left ‘a metropolis in flames and a nation in ruins.’ There was no one reason why they started. It had been a difficult period for many, with the poor suffering low living standards, and the country in the middle of an unpopular war with America.

This was also a time when religious intolerance was wide-spread. The Catholic Relief Act of 1778 had removed some restrictions from Catholics. While this had not attracted public opposition at the time, an attempt in 1779 to extend this to Scotland, was met with anti-Catholic rioting in Glasgow and Edinburgh. This ultimately led to the measure being withdrawn.

In London a Protestant Association was formed to support the work in Scotland and to bring about a repeal of the Catholic Relief Act in England. In November 1779 Lord George Gordon, a member of the Scottish House of Commons became their president.

The Association began to organise petitions, which requested the appeal of the 1778 Act. These began to be submitted to Parliament as a result of the Association’s intervention, with one from the Cities of London and Westminster being presented in January 1780. On 30 May 1780 Lord Gordon announced he would present a petition from the Protestant Associations of London, Westminster and Southwark to Parliament on 2 June.

On 2 June politicians assembled in Parliament to discuss the issue. The petition to be submitted was signed by some 44,000 individuals. In response to advertisements and handbills urging people to attend and support the petition, a sizeable crowd gathered outside Parliament,  Members of the House of Lords were attacked by the crowd as they arrived, and a report in the Gentleman’s Magazine records how two members of the Inn were assaulted; ‘They stopt the venerable old Lord President Bathurst in his carriage, pulled him a hundred different ways in getting out, kicked his legs, and it was with difficulty he got in to the House. Lord Mansfield was daringly abused, and had mud thrown in his face.’

However, Lord Gordon lost the vote to have the petition received by Parliament, and this led to violence breaking out. That evening parts of the crowd began to move towards Holborn. The Sardinian Ambassador’s residence in Duke Street, Lincoln’s Inn Fields was broken into, and the altars, ornaments, furniture and altar piece from the chapel were all burnt on a bonfire in the Fields, before the chapel itself was set on fire. Soldiers were called to protect those manning fire engines, after the crowds also began to attack them.

Outbreaks of rioting continued throughout the next two days. Parliament refused to debate the petition when they met again on 6 June, which led to a new wave of rioting. Catholic sites had been targeted initially, but properties of politicians who had supported the original Bill were also being besieged. This included Lord Mansfield’s house in Bloomsbury Square, which was set on fire by the Gordon Rioters on 6 June 1780.

Despite large numbers of horse and foot guards arriving in London, the rioters continued to grow in strength. The anger of the crowd began to turn against state institutions, especially London prisons where some of the rioters had been imprisoned. Most central London prisons were attacked. Newgate Prison, was set on fire and over 300 prisoners were released, while prisoners were also freed from two gaols in Clerkenwell. The Fleet Prison was also broken into and then torched.

The rioting reached its height on 7 June. Gangs roamed the streets with iron bars; looting was widespread and more houses were broken into. Attacks on prominent Catholics began again, and as a result Langdale’s distilleries in Holborn were burnt down. This created an apocalyptic scene, as the vats of alcohol caused flames and smoke that could be seen thirty miles away. The King’s Bench prison in Southwark was also burnt down, along with the Borough Clink.

Such devastation provoked a fierce reaction from the military who been sent in. Although the City of London authorities had initially been slow to react, eventually a force of around 10,000 troops arrived in the capital. Martial law was instated and rioters were killed and imprisoned. By Thursday 8 June the military presence had largely gained control of the situation.

The riots must have been of great concern to the Inn. There would have been scenes of devastation all around and the likelihood of the Inn being attacked would have been high, especially considering the attacks on Lord Mansfield. Precautions, which included officers and soldiers on guard at Lincoln’s Inn, had been taken. Lord Amherst (who was Adjutant General) contacted the Society to ask if they wished the military guard to continue. The response decided at the meeting of Council on 21 June, was that Council ‘are of the opinion that a captain’s guard will be sufficient for the security of this Inn, if his Lordship will be pleased to authorize this Society to apply for reinforcement in case of any sudden emergency.’ These provisions proved to be sufficient, and the Inn escaped unscathed, unlike much of central London, which had not seen such devastation since the Great Fire in 1666.