The Inn’s events this month included the annual Warburton Lecture, established by a former Preacher of the Inn and one of the most controversial Churchmen in a century of virulent clerical disputes.

William Warburton (portrait by Charles Philips, circa 1737, © National Portrait Gallery) was born in Newark, Nottinghamshire in 1698.  Appropriately for a man who would become Preacher of Lincoln’s Inn, Warburton followed his father into a legal career, practising as an attorney between 1719 and 1723.

Warburton swiftly exchanged a career in the Law for one in the Church, being ordained deacon in 1723 and priest in 1727. The following year he was presented to the wealthy living of Brant Broughton in Lincolnshire. Further lucrative appointments and a financially advantageous marriage (to the niece of Ralph Allen of Prior Park, Bath) followed.

Throughout his life, Warburton engaged in (and often provoked) many of the controversies of the day. He wrote extensively on theological and ecclesiastical issues, but also wrote on a number of legal topics. He collaborated with Samuel Burroughs on The legal judicature in Chancery stated, published in 1727. Of more lasting significance was his Letter from an Author to a Member of Parliament Concerning Literary Property (1747), an early consideration of the question of an author’s rights.

Warburton’s writings on religious and philosophical topics were extensive. His views and, particularly, his combative style generated considerable controversy, although certain publications garnered support from unexpected sources. The Divine Legation of Moses Demonstrated, a defence of revealed religion in the face of contemporary Deist philosophy, predictably aroused criticism from its targets, but simultaneously antagonised a broad swathe of Anglican opinion. The Bishop of London actively encouraged the clergy of his diocese to publish rebuttals of Warburton’s views. The work reached a European audience, again dividing opinion. A German translation of The Divine Legation was influential in Germany, while in France both Voltaire and Rousseau published criticisms of some of Warburton’s views.

Warburton’s range of intellectual interests also encompassed literary criticism, another field where his sharply expressed views divided opinion. His spirited defence of theological views expressed in An Essay on Man led to a friendship with Alexander Pope. On the latter’s death in 1744, Warburton inherited half of Pope’s library as well as the copyright to all his printed works. Warburton edited an edition of Pope’s works in 1751. Other projects included contributing to two editions of Shakespeare – both of which resulted in considerable acrimony and to Warburton publishing his own edition in 1747.

On 16th April 1746 Warburton was appointed Preacher of Lincoln’s Inn, partly through the offices of his friend Lord Mansfield. A number of the sermons he preached at the Inn were published in 1753 as The Principles of Natural and Revealed Religion Occasionally Opened and Explained. 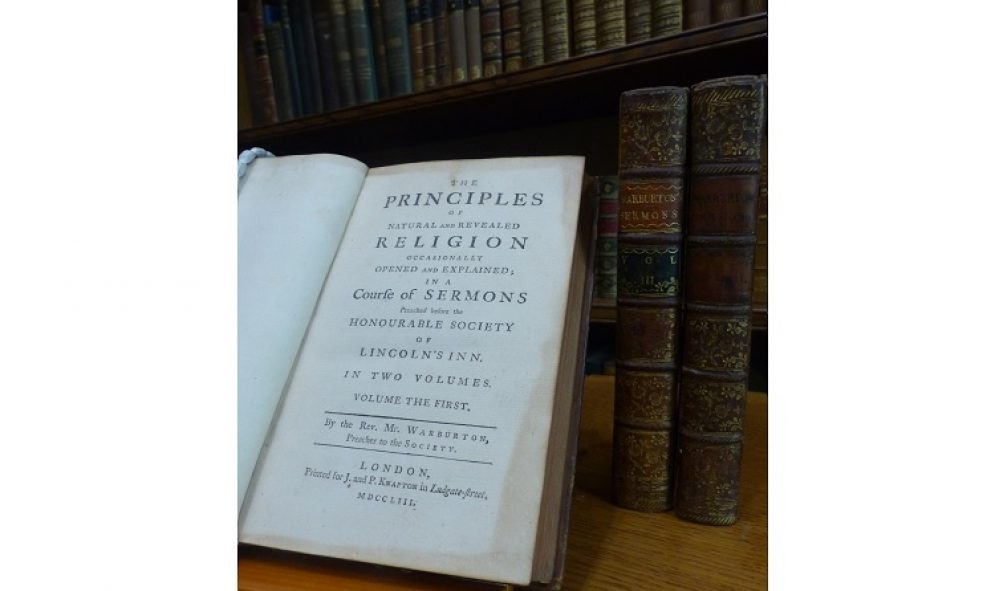 The Black Books are largely silent on his tenure as Preacher, but note his consecration as Bishop of Gloucester on 20th January 1760. Warburton resigned the Preachership the following year. In 1766 his arms as Bishop of Gloucester were put up in Hall. This wooden panel now hangs in the Great Hall, and Warburton’s arms are also included in the stained glass windows. 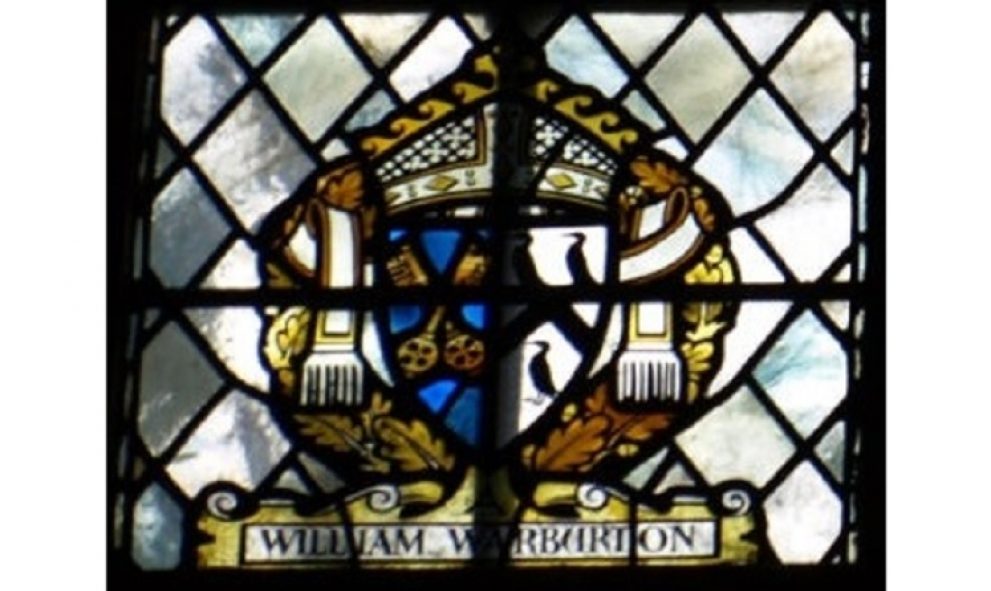 Upon the motion of the Hon. Charles Yorke, Esq., one of the Masters of the Bench, representing that William, Lord Bishop of Gloucester, intends to found a lecture, in the form of sermons, for proving the Truth of the Christian Religion from the completion of those Prophecies in the Old and New Testament which relate to the Christian Church, especially to the apostasy of Papal Rome; and that his Lordship is desirous that the Rev. Mr Hurd, (now Preacher to this Society), and all the succeeding Lecturers, may have leave to preach the same annually, on three Sundays, after Morning Service, in the Chapel belonging to this Society, viz:- on the first Sunday after Michaelmas Term, and also on the first Sunday before and the first Sunday after Hilary Term – It is ordered that leave be given pursuant to the said request, and that Mr Yorke will be pleased to signify the same to his Lordship, with the just sense entertained by the Masters of the Bench of his attention and regard to the Society upon this occasion.

The trust deeds of the Lectureship, contained in the Inn’s archives, also stipulate that the text of the lectures should be published.  The administration of the Lectureship was distinct from the Inn, although most of the trustees were members.  The first trustees were Warburton’s friend Lord Mansfield, Sir John Eardley Wilmot (Chief Justice of the Common Pleas from 1766 to 1771) and the Hon. Charles Yorke.  Subsequent trustees have included a Prime Minister, a Bishop of London and four Archbishops of Canterbury.

The first lecture was delivered in 1768 by Richard Hurd, Preacher of the Inn between 1765 and 1776.  A close friend of Warburton, Hurd followed a similar literary and ecclesiastical career, culminating in his appointment to the See of Worcester in 1781.  He collaborated with Warburton on the latter’s Remarks on Mr David Hume’s Essay on the Natural History of Religion and later oversaw a seven volume edition of Warburton’s work.  Their correspondence was published in 1808.  Hurd’s twelve Warburtonian Lectures were published as An Introduction to the Study of Prophecies Concerning the Christian Church , and in Particular Concerning the Church of Rome and ran to five editions.

Following Hurd’s tenure as Lecturer, the Inn maintained a remarkable consistency in appointing lecturers.  Furthermore, the requirement to publish the text of the lectures was also followed by the majority of lecturers until the 1930s.  The list of appointments from 1768 to the present day contains many distinguished clergymen and a number of names which are well-known even today: Frederick Denison Maurice (Preacher of the Inn and one of the founders of the Christian Socialism movement) and Dean Inge. Herbert Hensley Henson, a figure every bit as controversial as Inge was due to deliver the lectures in 1940, but they were suspended for the duration of the War.

The lectures were reinstated in 1947, but lapsed again in 1970, not least because the original funds had been depleted.  In 1985, however, the Inn decided to revive the lectures, but broaden the scope of the subject matter from the very specific concerns of Bishop Warburton.  The trust deed was therefore amended as follows:

To interpret and apply the truth of revealed religion in general and of the Christian in particular including, if thought fit, the relationship between the concepts and practice of law and the principles and practice of religion.

In line with the more oecumenical remit of today’s lectures, the distinguished list of lecturers since 1985 includes not only former Archbishops of Canterbury and York and diocesan bishops, but figures from other denominations, eminent lawyers and the former Chief Rabbi, Lord Sacks.