Lincoln’s Inn has a long history of educating and supporting students and those studying for the bar. The Inn’s scholarships, bursaries and prizes assist many students with the costs incurred during their legal training.

Much of the necessary funding for these has come from generous benefactions. One was a gift of £1,000 (worth many times that in today’s money) in 1944 made by Viscount Bennett. On the 30th March 1946 the Inn established the Bennett Fund to apply the money for the ‘charitable purposes in aid of (or in connection with) the education of members of the society’. Initially the terms of the Bennett Fund were that it would support a cash prize to be awarded at intervals of not more than three years and that it would be awarded specifically for the ‘encouragement or assistance of the study of constitutional law and comparative jurisprudence within the British Empire or of any legal or allied study relating to the British people or constitution’. An image of the Trust deed is shown above.

Originally it took the form of an essay prize, then from 1981 it was awarded to the student who obtained the best result in the paper on EEC Law and Human Rights in the Trinity Bar exam. The award was given to students for nearly 60 years and many recipients went on to careers of high distinction. In 2003, when there was a rationalisation of the Inns charitable Trust Funds it was amalgamated into what is now known as the Educational Awards Fund, which continues the original intentions of the Bennett Fund of supporting students at Lincoln’s Inn. The Bennett Fund was finally removed from the Central Register of Charities at the Charity Commission on 13th December 2005. The following image shows a letter from Child & Co Bank on Fleet Street confirming the opening of the Bennett Fund account. 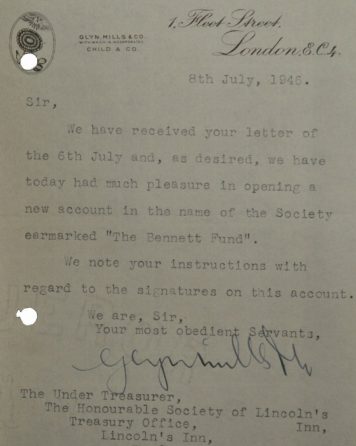 The reference in the original Trust deed to the British Empire is very telling of the man who provided the funds for the establishment of the fund. Richard Bedford Bennett, 1st Viscount Bennett, was the 11th Prime Minister of Canada and was made an honorary Bencher of Lincoln’s Inn on 13 October 1930. In his early career he practised at the bar in Canada, mainly in Calgary in Alberta, becoming King’s Counsel in 1905. He took retirement in England and died in 1947 aged 77.

In addition to the fund, Bennett also donated the silver model of The Golden Hind in the Library, a rosewater bowl and a pair of silver-gilt candelabra that are now used on Grand Days and other special occasions. The model (image below) was made by the Goldsmiths and Silversmiths Company Ltd in 1930 (now part of Mappin and Webb), apparently from some drawings of the ship made by one of Drake’s officers. These drawings are now reputedly held at the Bibiotheque Nationale in Paris. 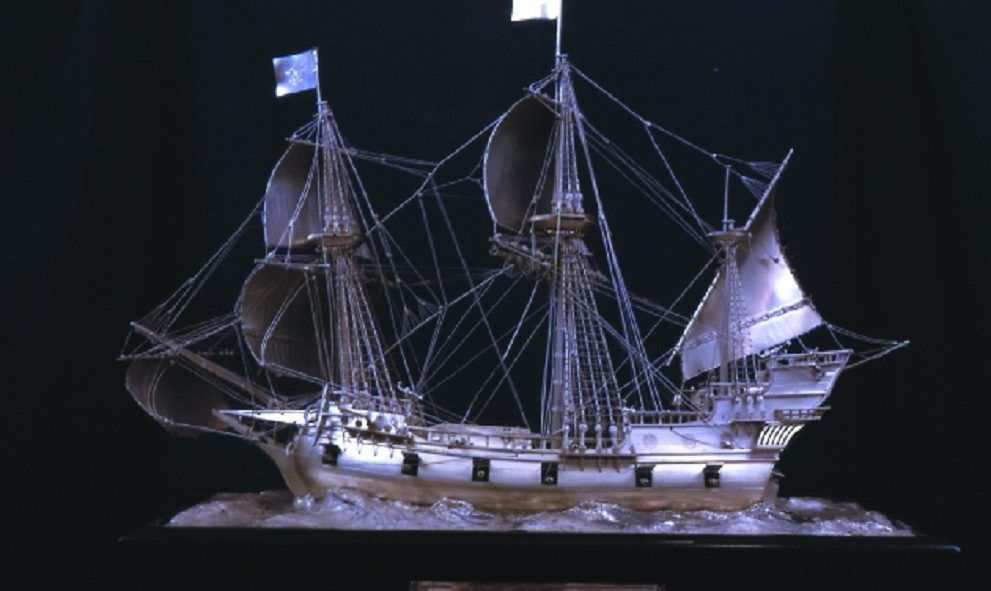