There are thought to be around 100,000 war memorials in the UK. Many of these were created by communities after the end of the First World War. This was certainly the case with the War memorial at Lincoln’s Inn, which was built in 1921 to honour members who lost their life in the Great War.

A memorial had first been suggested in 1919, and a committee was put in place to investigate the possibility. At a Council meeting on 3 November 1919, a report of a meeting of the War Memorial Committee (held 24 October 1919) was read. It advised that ‘an outside memorial should be recommended; that Mr Simpson [Sir John W Simpson, Architect to the Society] should be asked to consider further and suggest the character of the Monument and the best site.’ Sir John Simpson would later also oversee the restoration of the Old Hall, which rectified the detrimental changes that had been made during the eighteenth century.

At a Council meeting held 30 January 1920, a further report was read, which discussed a model obtained from Mr Simpson, depicting the intended design for the memorial. The model showed ‘a central block in cenotaph form, on the face of which a bronze tablet is fixed containing in two columns the names of the Members of the Inn who have laid down their lives in the War: on each side, connected by a seat and a balustrade, is a minor block, with a bronze tablet having on it the names of others who have perished being sons of Members of the Inn.’ The report observes that ‘in this way a combined memorial is obtained, while a distinction is marked between the private offering and the monument of the Society itself.’ The Committee had concluded that the best place for the monument would be on the plot in Old Square, north of the Chapel. This was seen to be a ‘reposeful and dignified spot, and at the same time one which is passed by more of those who frequent the Inn, from whichever side they approach, than perhaps any other.’ The model was designed with this site in mind but while the proposed design was approved, the site was not.

Several sites had been considered in addition to the Old Square location. These included New Square gardens, in place of or behind the Brewster Gate, or on the front of one of the other three sides; sites in the garden between the Hall and the Chapel; locations on the terrace and in the garden, west of Stone Buildings. 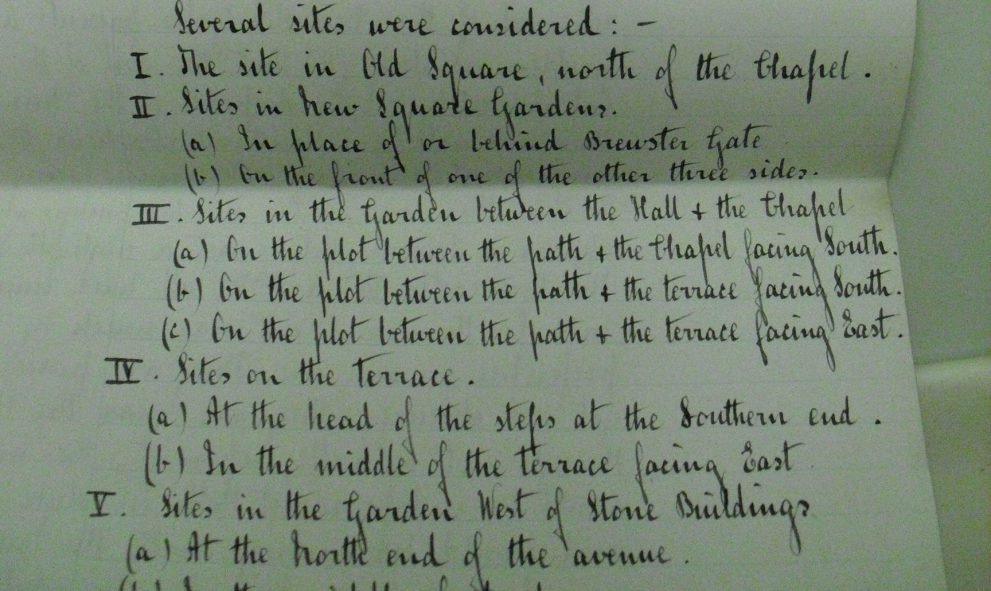 The Committee voted in favour of it being situated on the plot between the path and the Chapel facing south. This was considered to have the most merits, especially as the memorial would look down the eastern road of New Square, where the space was considered ‘one which seems to demand completion by some object.’ The Architect observed in his report that, despite his preference for the site north of the Chapel, the second choice ‘is in better sunlight than the first site.’

At the Council meeting of 1 March 1921 the Treasurer reported that the Right Hon. Herbert Henry Asquith KC MP (who was a member of the Inn and as Prime Minster had been responsible for the declaration of War on 4 August 1914) would unveil Lincoln’s Inn War Memorial on Wednesday 16 March 1921. Asquith gave a speech at the unveiling which was recorded in the Black Book of the time. 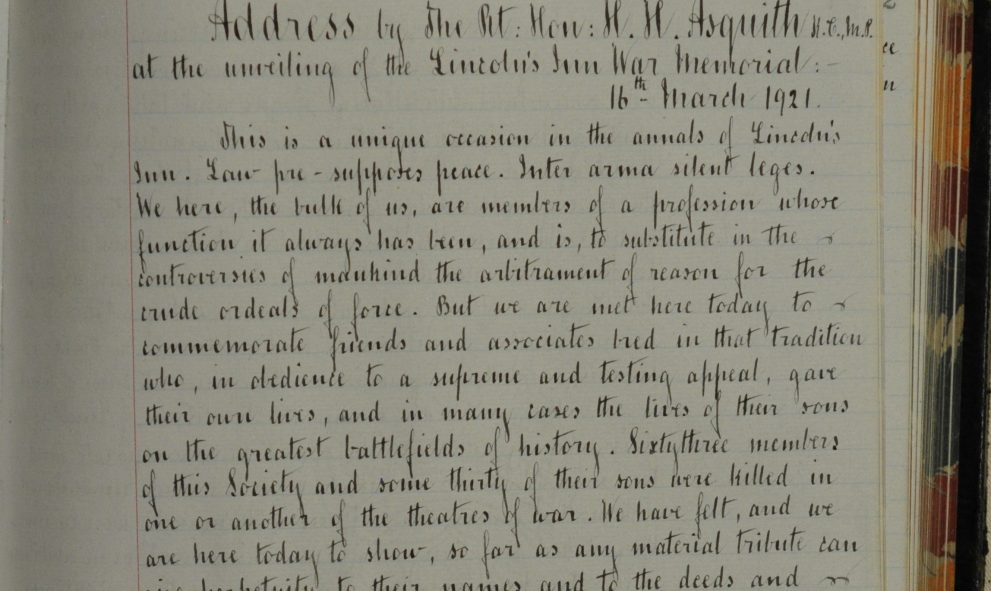 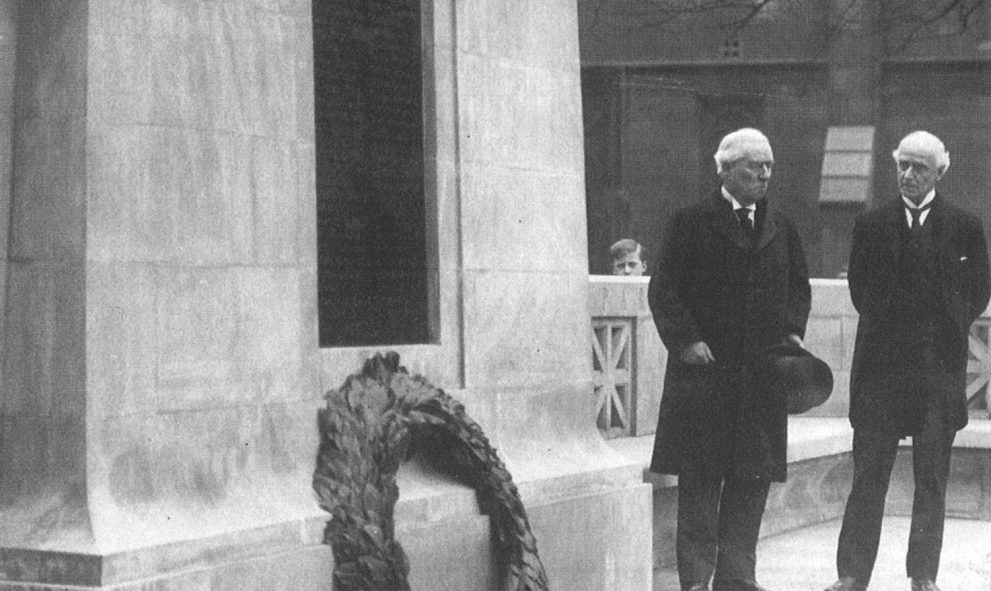 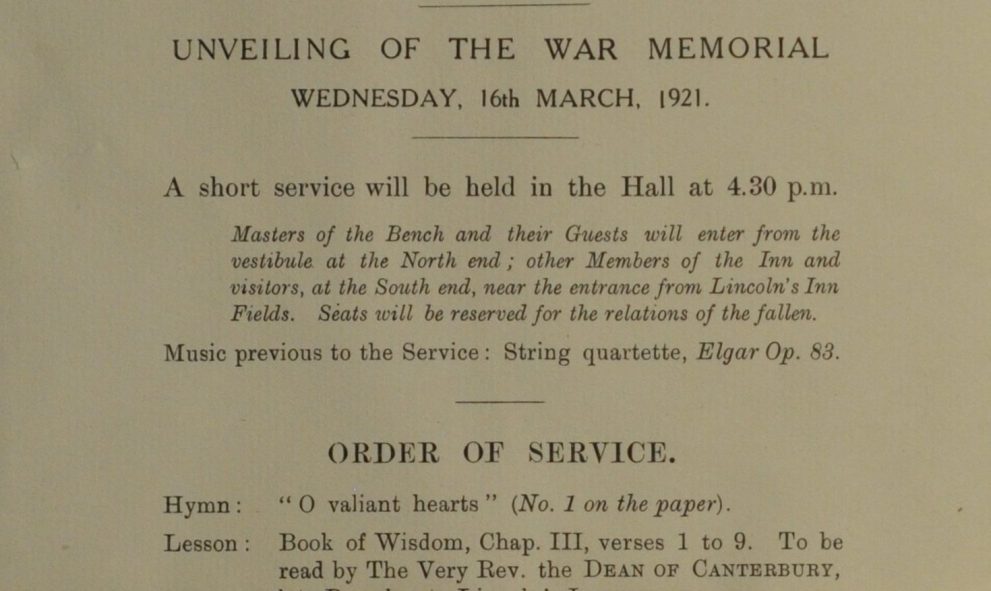 In November 1947 a committee was appointed to ‘consider the feasibility of adapting the existing War Memorial to serve also as Memorial to Members of the Society killed in the Second World War.’ Subsequently at a Council meeting held 25 May 1948 it was ordered that ‘an appropriate notice be sent to the ‘Times’ and that a circular letter be sent to Members of the Inn asking for information concerning those Members and children of Members who lost their lives whilst serving in H M Forces or as a result of enemy action.’

About thirty names were gathered to be commemorated. Tablets were commissioned from G H W Cashmore, based on his submitted drawings, to be placed within the existing memorial. It was decided that the ceremony for the unveiling should ‘follow substantially the ceremony after the First World War.’ Letters of invitation for the unveiling were ordered to be sent to the relatives of the fallen and notices were to be circulated to the heads of all Chambers in Lincoln’s Inn.

Admiral of the Fleet, Andrew Browne Cunningham, 1st Viscount Cunningham of Hyndhope (who was an Honorary Bencher of the Inn) unveiled the additions to the memorial at a ceremony on 17 May 1950.