The early history of Thavie’s Inn seems shrouded in ambiguity. The oldest deed pertaining to the Inn in the Archive is an indenture dated 24 November 1548, by which Roger Pateshale sold Thavie’s Inn for £100 to Gregory Nicholas, a Citizen and Mercer of London.

By quitclaim of 25 January 1551, Gregory Nicholas subsequently sold Thavie’s Inn to the Benchers of Lincoln’s Inn for the sum of £75.  Although this deed has not survived in the Inn’s Archives, E. Williams’s Early Holborn and The Legal Quarter of London, Volume 1, provides an abstract (Hustings Rolls 246, No. 47):

The building in question had been in existence since before 1348. The commonly attributed origins of the Inn have it founded by John Tavy, a local armourer in the reign of Edward III. Tavy died in 1348 and bequeathed in his will certain property in Holborn towards the upkeep of the adjoining church, St Andrew Holborn. In the will reference is also made to an Inn or hospicium where apprentices (taken later to mean law apprentices) were housed.

There was also a belief, referred to in William Dugdale’s Origines Juridiciales, that the first Templars came from Thavie’s Inn. This theory has been disputed since then, but the connection with Tavy has remained relatively unchallenged. However, in ‘Essays in legal history read before the International Congress of Historical Studies, held in London in 1913’ William Blake Odgers in ‘A sketch of the history of the four Inns of Court’ presented an alternative theory. He argued that what became known as Thavie’s Inn was actually occupied in 1376 by a John Davy, who was a Chancery clerk and Receiver for the King for the counties of Carmarthen and Cardigan. This property was situated on the east side of John Tavy’s, and is apparently described in an original deed of 26 June 1346.

W. B. Odgers speculates that the name ‘Thavy’ could have derived from Davy having spelt his name with two ‘D’s’, which in Welsh would have been pronounced as ‘th.’ He also observed that John Tavy’s will does not assert that the apprentices were law apprentices, and in fact they are described as ‘his’ apprentices, making it more likely that they were armourers.

The deeds referred to in the article are recorded as being in the possession of his friend ‘Mr E Williams of the Prudential Assurance Company’. It may be that these deeds are now either part of the Prudential Assurance Archive or perhaps part of a collection of Holborn deeds from the Company which were deposited with the London Metropolitan Archive. However the Mr E Williams in question must certainly be the same gentleman who in 1927 published two volumes on ‘Early Holborn and the Legal Quarter of London.’ This work meticulously outlines the complex web of ownership and occupancy of property in the area during this early period, using deeds and evidence found in the Hustings Rolls. From his examination it is clear that Thavie’s Inn (as it is now known) originally consisted of two separate properties. The first was a house and land that fronted onto the street of Holborn on its north side. The second was a garden south of this area, but these were not under single ownership until 1390. The first property was owned by the de Besvile family and it was a property in the style of a legal Inn. It was referred to as Besvile’s Inn, but later became known as Davys Inn. Why it became known as Davy’s Inn is not clear. John Davy (previously referred to by W. B Odgers) had originally been in possession of what became known as Furnival’s Inn, but he sold his share and left that Inn in 1376. Williams observed that it is possible that he became Master of the Inn in question which perhaps led to the affiliation. He pointed out that a precedent could be seen in the case of Barnard’s Inn, which had been named after its Principal, Lionel Bernard.

E. Williams also clarifies the situation regarding the connection with John Tavy. The neighbouring Bartlett’s Buildings (located left of Thavie’s Inn on the map) originally consisted of four properties, which included the Inn of John Tavy, armourer. The four properties became known as Mirfield’s Inn and were given by Henry VIII to Bartlett, his printer, thereby becoming known as Bartlett’s Buildings. It would appear that Tavy’s property became assimilated over time and its exact location largely forgotten.  By the sixteenth century, references to ‘Tavy’ and ‘Davy’ that were found recorded in documents were assumed to be one and the same, and a new history developed over the years.

Some shadows of doubt had been cast over the Tavy connection previously and in ‘A New View of London: or An Ample account of the City volume II’ published in 1708 it was commented on that the armorial ensigns of Thavie’s Inn are ‘azure, 2 garbs saltier ways or, on a chief sable, 2 rays of an escarbuncle florette and pomette of the 2d’ whereas ‘the Arms of Thavy, as I find painted near the Inn, are, Azure, on a bend gules, 2 garbs or, on a chief sable a tau argent; and this motto…Pax Concordia.’

Within the Black Books of Lincoln’s Inn, Thavie’s Inn is recurrently referred to as ‘Davy, Davys, Davies, Davye’s, Davydes’ Inn during the sixteenth century with frequent alternate references to ‘Thavie’s, Thavyde’s and Thavis’ Inn during this time. By the seventeenth century it is consistently referred to as Thavie’s (or variations of) with occasional note of ‘alias Davies Inn.’

Lincoln’s Inn ultimately sold Thavie’s Inn in 1772, after it had fallen on hard times. The relationship with this Inn of Chancery had never been easy and the Black Books are full of references to unpaid rent, along with other concerns and complaints. Thavie’s Inn was bought by Thomas Middleton, a member of Lincoln’s Inn, for £4,100 after it was advertised for sale. Minutes in the Black Book, for a Council meeting of the 26 May 1769, record that it was ordered that ‘the plans of Thavies Inn be delivered to the purchaser there or when applied for’ which may help to explain why there is so little documentation remaining in the Archive.

The buildings of Thavie’s Inn burnt down at an unknown point prior to 1804. In 1818 John Aldolphus wrote in The Political state of the British Empire that ‘This Inn having been burnt down is now converted into a private court, composed of ordinary dwelling houses, not divided into chambers but enclosed and separated from the street by an iron gate.’ This is depicted in this view of Thavies’ Inn of 1858.

This new building was occupied by individuals of various trades including goldsmiths and attorneys, and is even the address of Mrs Jellyby in Bleak House, from where she carried out her charitable work for Africa. By 1871 the City of London Poor Law Union was operating a casual ward at the Thavie’s Inn site. It subsequently became a City of London Union Workhouse (1901-1914) and then a City of London Union Infirmary (1914-1927), before becoming known as Thavie’s Inn Infirmary until 1931. The site was destroyed completely during World War II and today the only reminder of the site’s past is in the modern office block ‘Thavies Inn House’ and a short street called ‘Thavies Inn.’ 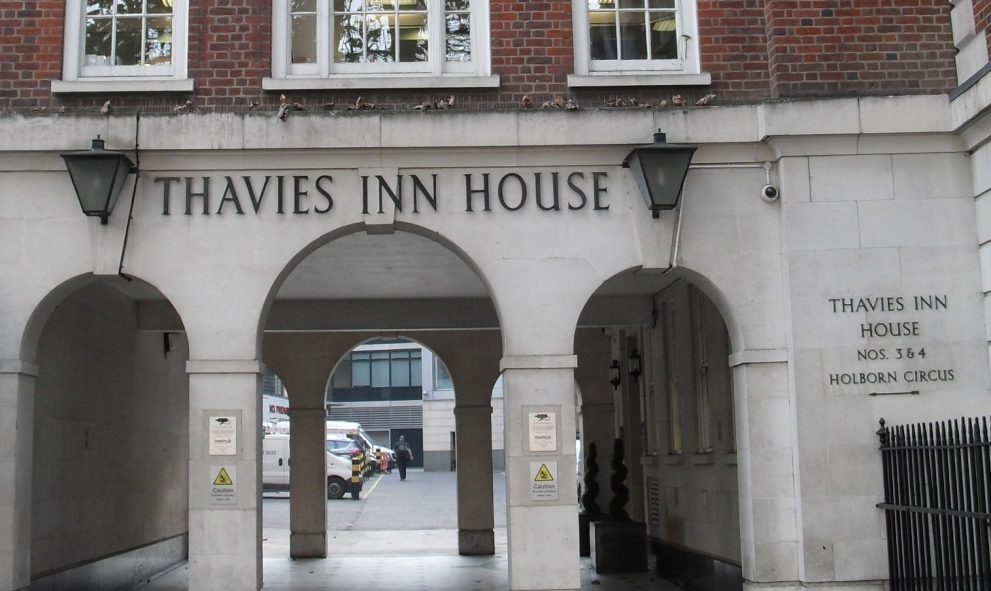 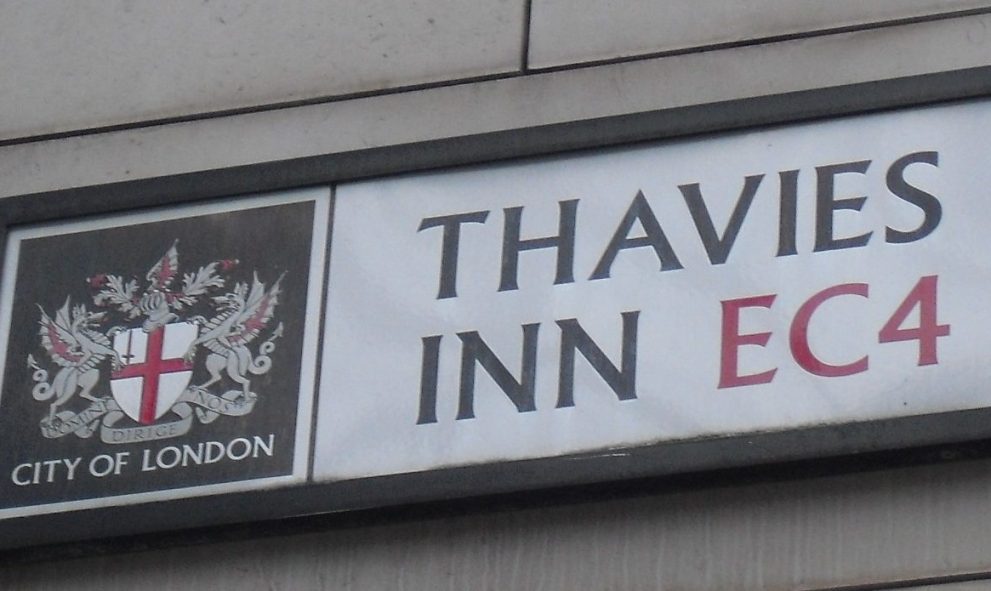