As is generally known, this Inn, in contrast to the other Inns, was fortunate in receiving only relatively slight bomb damage during the Second World War. It may not be so widely known, however,  that it was perhaps less fortunate in the First World War.

At 9.25 on the evening of Wednesday the 13 October 1915, a Zeppelin air raid took place, dropping incendiary bombs on the roofs of 7 and 8 Stone Buildings and explosive bombs on 9 New Square and beside the Chapel. Although none of the damage was structural, some of the original seventeenth century stained glass windows in the Chapel were partially destroyed.

The images below show the location of the bomb explosion (see the blast marks and shrapnel pock marks on the wall of the Chapel) and the damage done to the Chapel windows. Copies of the images were given to the Inn by Historic England at the end of last year and can be viewed on their website by clicking here. 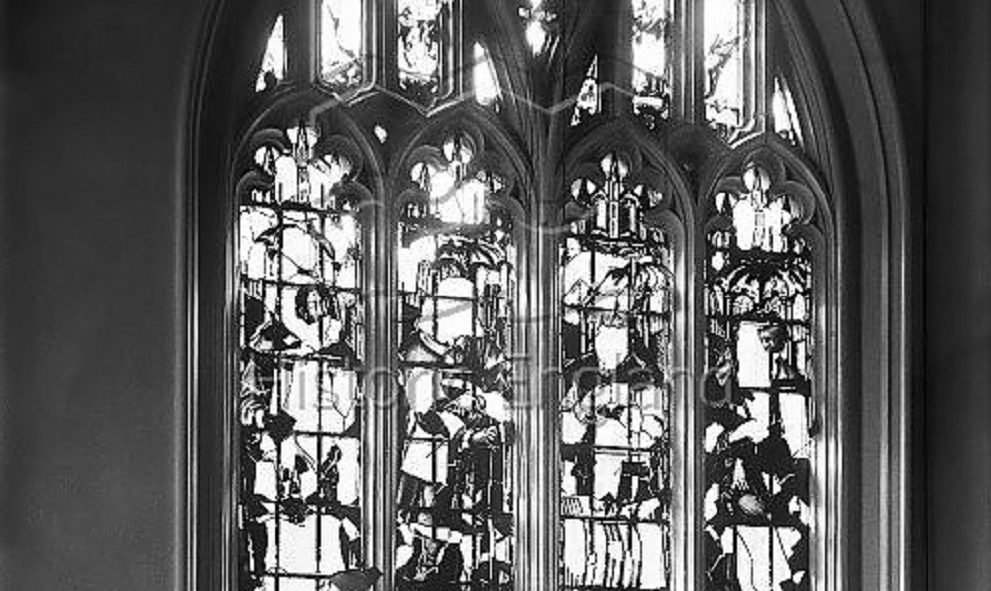 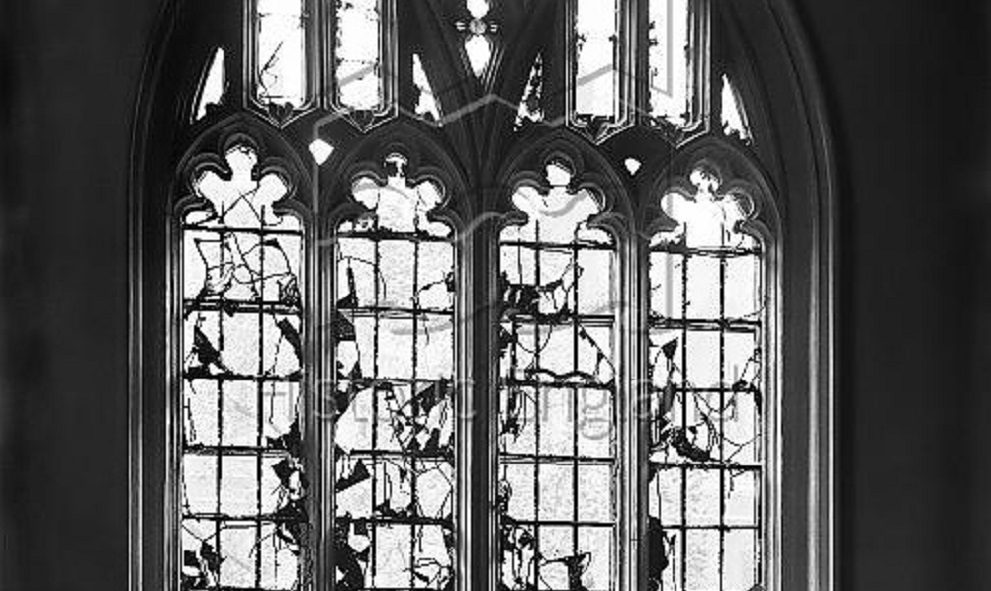 Contemporary correspondence between the Inn and stained glass restorers C. E. Kempe & Co Ltd who were employed by the Inn to carry out restoration of the windows shows that of the glass that was damaged that was still in situ, even if cracked or damaged in some way, was held in place with extra thick paper. This was of course only a temporary measure and soon afterwards, the Inn removed and stored the fragments of broken glass (as well as the complete windows that were not damaged) in boxes elsewhere on the Inn site until the end of the war. Temporary plain glass windows were then installed over the outside of the window frames. The company, C. E. Kempe & Co. Ltd.  was originally owned by the well known stained glass artist Charles Eamer Kempe although it was renamed in his honour on his death in 1907. The page below is one of many letters between C. E. Kempe & Co Ltd and the Inn, but unlike the other letters, this example includes small illustrations of the windows in the margins. 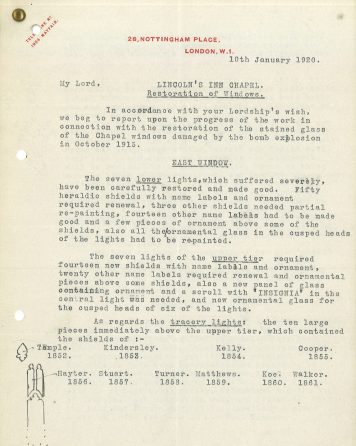 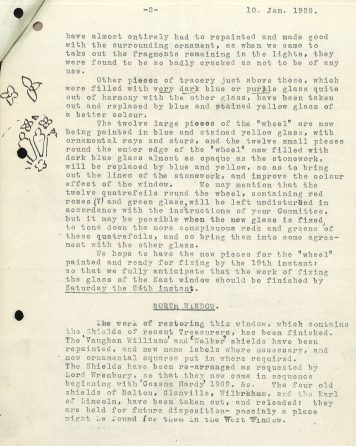 The estimated cost to restore the East window was £565, the window containing Zechariah, Amos, Ezekiel and Jeremiah, being half destroyed, cost £360 and all windows on the South side, including those containing St. Peter, Andrew, James and John about £850. In all the cost was estimated between £1350 and £1425 not including costs of scaffolding or repair to stone or lead work. The following report from C. E. Kempe & Co. Ltd lists in more detail the work that was required. 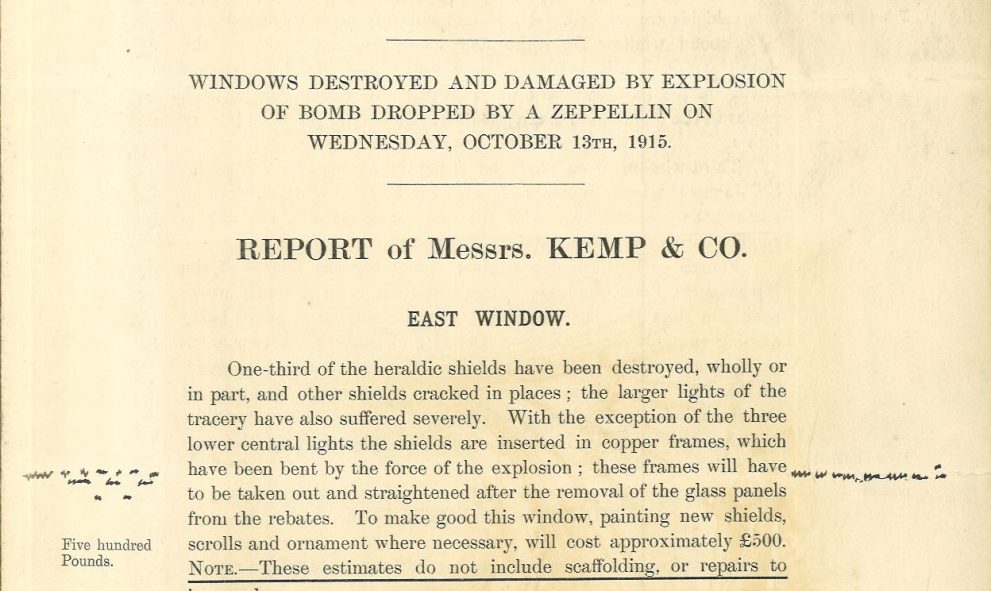 It is also worth mentioning that the spot where the bomb fell is now commemorated by a small round bronze marker in the tarmac with the plaque below attached to the Chapel wall. 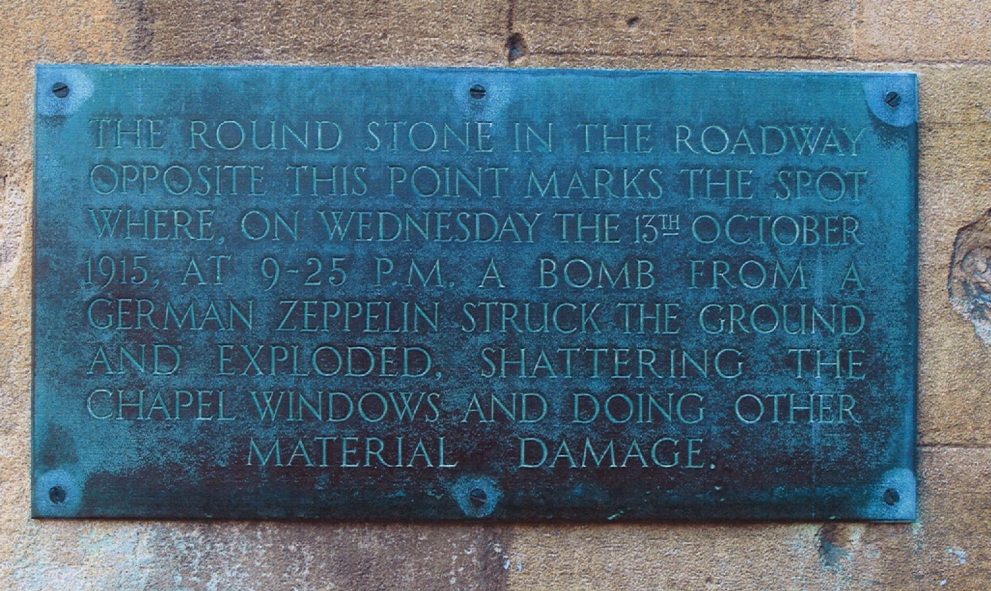