Between 1664 when this outbreak of bubonic plague first appeared to the summer of 1666 when it subsided, around 100,000 people died in London which at the time was about a quarter of the total population. It affected all members of society and spread throughout the City of London to many nearby suburbs as well as to various towns in Britain. Lincoln’s Inn was not safe from the outbreak and indeed by June 1665 all members of the Inns of Court were told to leave, many returning to their houses in the country. The entry shown below comes from the Black Books for June 1665 and lists how the Inn was to deal with the plague or ‘infection’ as it is called here, under four heads. 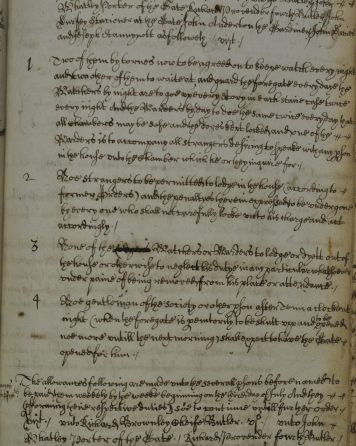 Once members of the Inn had left, it was decided that seven members of staff would stay on duty to ensure the Inn remained secure. They were Richard Brownley, chief butler, John Whatley, porter of the gate, Richard Provender, fourth butler, John Durfey, stacioner at the gate, John Anderton the gardiner, John Davies, washpott (washer of pots) and Joseph Stannynott, also a washpott. Their duties included ensuring all door locks were changed so nobody with existing keys could let themselves into the Inn and that no unauthorised people came into the Inn, keeping watch by checking every room in the Inn each night and disallowing entry to the Inn to any member returning after 10 pm. As some recompense for having to remain at the Inn they were given extra provisions of beer on top of their usual allowance although until they were told otherwise they were not allowed to ‘lodge or dyett’ outside the Inn. Their weekly salaries for this period were six shillings for the chief butler, four shillings each for Durfey and Anderton and five shillings each for everyone else.

Protecting the Inn’s property while it was empty, while sensible, was of course no precaution against the disease itself.  Fear of infection or hope of a cure generated a ready market for medicinal advice.  The Library holds two scarce pamphlets, both printed in 1665 on the topic (they come from vol. 22 of the Brydall collection, and their title-pages are illustrated below). The chances of some of the preventive recipes and cures suggested being effective look decidedly slim to the modern reader – and some are downright bizarre.  Burning all the sweet-smelling herbs and plants you could lay your hands on to perfume your house may have been some form of palliative, but whether drinking the juice of an onion that had been cut in half, filled with treacle and then roasted would stave off a very unpleasant death is more doubtful.  Perhaps the strangest cure has to be the following. The infected person was advised to pluck the feathers from a hen from the area where it ‘layeth egges’, put the bare area on the plague boil, the pus of which would apparently be absorbed by the hen. The hen would then die and then the user is recommended to do this with three or four more hens until they are cured. 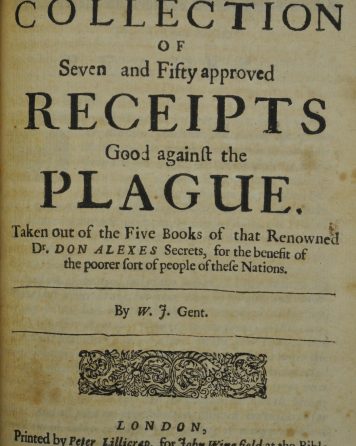 It is easy to see why people were so keen to take precautions against the plague in any way they could.  Even if people were not only too well aware of all those dying around them, a detailed system of collecting and publishing weekly death statistics in each parish – bills of mortality – had been established as a result of earlier plagues.  Below is the title-page of one of the mortality bills covering the parish of St Andrew’s  Holborn for the week 12-19 September 1665.  In that month alone about 900 died of the plague in the parish. 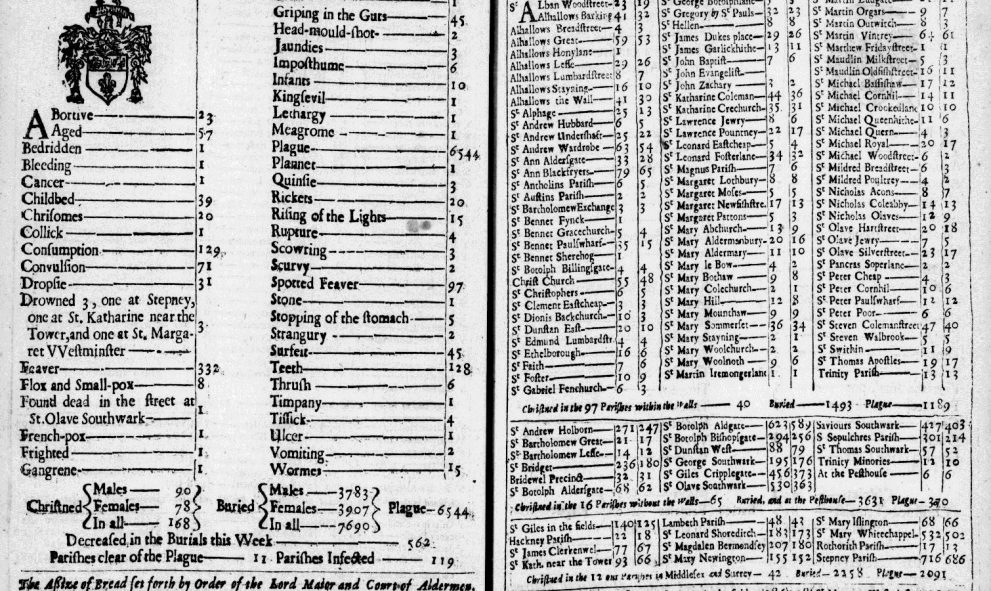 Although unfortunately there is no proof, it appears that in February 1666, John Davies the Inn’s ‘washpott’ was appointed to the position of porter which was left ‘void by the death of John Whatley’. One can’t help but wonder if Whatley succumbed to the plague although there is no way we can find out. If he had done then he would most likely have been buried in one of the many mass burial pits that sprung up all over the city. Some of these are currently being excavated at the old Bedlam burial ground near Liverpool Street Station as part of the Crossrail development.