Oh no, I hear you say, not another letter from the Treasurer. But, with the start of the Legal Year, and having given you a break over the Long Vacation, I thought I should write again.

May I first express the hope that you all managed at some point to get a break and some relaxation.

The summer has seen some changes amongst our number. First, our warm congratulations to Ben Stephens (formerly Lord Justice Stephens of the Northern Ireland Court of Appeal) on his appointment to the Supreme Court. Ben was called to the English Bar by the Inn before taking up practice in Northern Ireland. Out of the twelve members of the Supreme Court, Ben’s appointment means that six are Benchers of Lincoln’s Inn, including our Honorary Bencher, Jill Black.

A warm welcome to two new Benchers on their appointment to the High Court. Richard Meade QC, a member of the Inn and until his appointment in practice at 8 New Square, specialising in intellectual property, has been appointed to the Chancery Division. Adam Johnson QC has also been appointed to the Chancery Division. Adam was a solicitor and a partner in Herbert Smith Freehills. He is well known to some of our Benchers and I am delighted that he has accepted the invitation to become a Bencher here.  I am not sure when we will be able to introduce them to Hall in the usual way, but I know that they are both keen to contribute to the life of the Inn.

On a sad note, with the death of Ruth Bader Ginsberg we lost one of our most notable Honorary Benchers, pictured here with the Immediate Past Treasurer and Jill Black at the US Supreme Court in October last year. 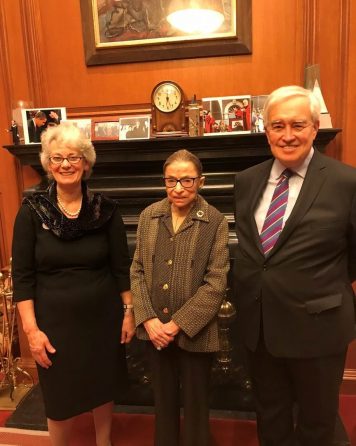 More recently still, we also lost Paul Heim. Many of you have been in touch to say how much you will miss him. I have, of course, passed on your thoughts to his family. With thanks to Mark Platts-Mills for pointing me in this direction, Paul’s reflections on his early life are a moving reminder of the hardships faced by refugees from the Nazis.

Looking ahead, there remains great, and indeed growing, uncertainty as to the effect of the pandemic on how we will lead our lives in the coming months and that applies equally to the Inn. Nonetheless, aspects of life at the Inn are closer to normal than they have been for many months. Lunches are once more served in the Great Hall. I was there for lunch on the day it was first served, early in September. It was a wonderful to be back and conversation seemed to pick up from where we had left it in March, with the odd reflection on events since then. The MCR is open until 10 pm (now with draft beer); the Library is open every day; and Sunday services will resume this month in the Chapel, albeit without refreshments or lunch available. Current restrictions mean that we cannot resume our face to face education activities, but our programme for students, pupils and new practitioners continues online.

The ubiquitous presence of hand sanitiser, the need to book for lunch and Chapel; and the sight of people wearing face coverings are all reminders of how times have changed, but the experience of lunching or using the Library is fundamentally as it was.

I suspect that those of you who have visited the Inn may have done a double take at the Great Hall under wraps for stone cleaning (as picture above). I reflect that it perhaps provides an analogy for the state of the Inn as a whole – an impression of normality, supported by complex activity behind the scenes and a confidence that before too long it will return to its true state, but improved.

Finally, the summer also provided me with the time to ruminate over the thoughtful suggestion which many of you made that I should serve a second year as Treasurer. I have decided that, subject to the agreement of my fellow Benchers, I would like to do so.

It is unlikely that we will see much change in the remaining months of this year and the first term of 2021. I am under no illusions about the rest of next year either, but we must be optimists. And as Treasurer during interesting times, I would welcome at least a few partly normal months.