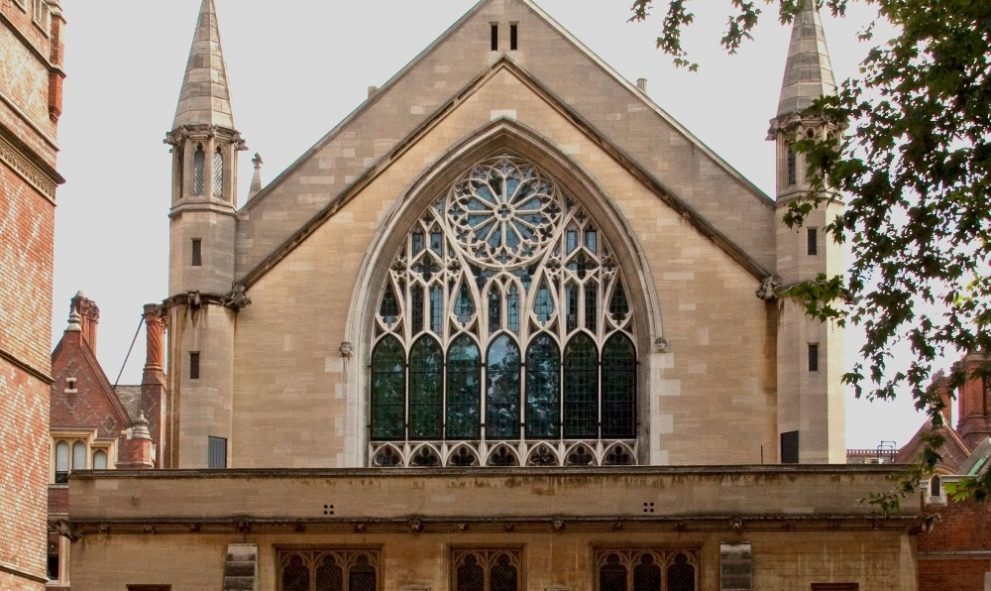 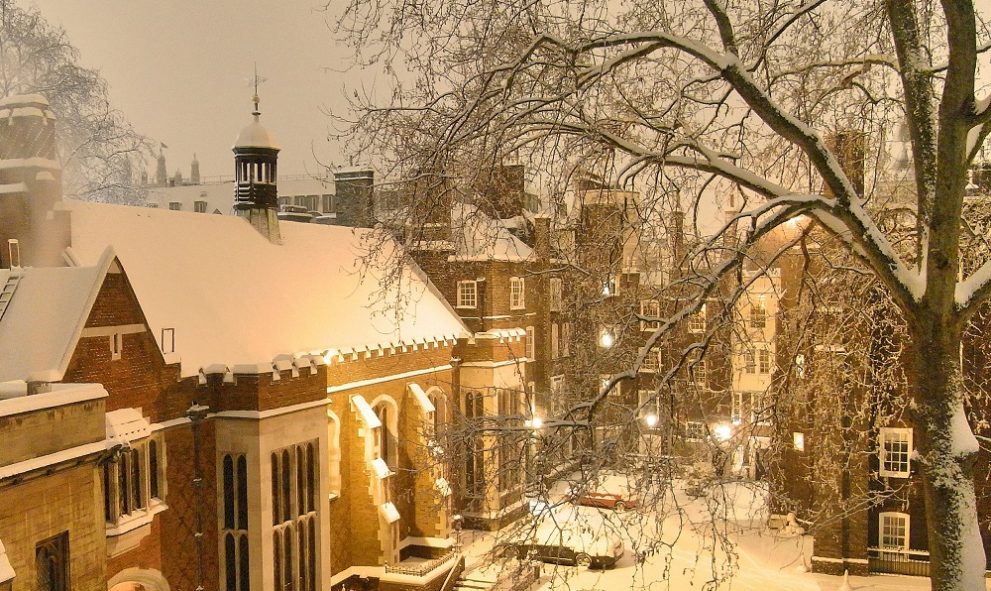 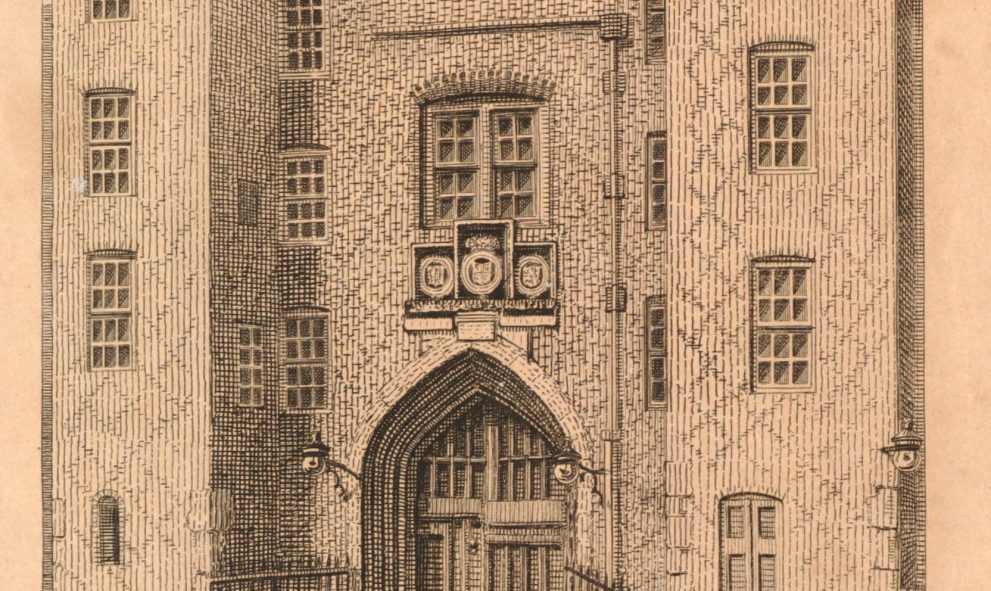 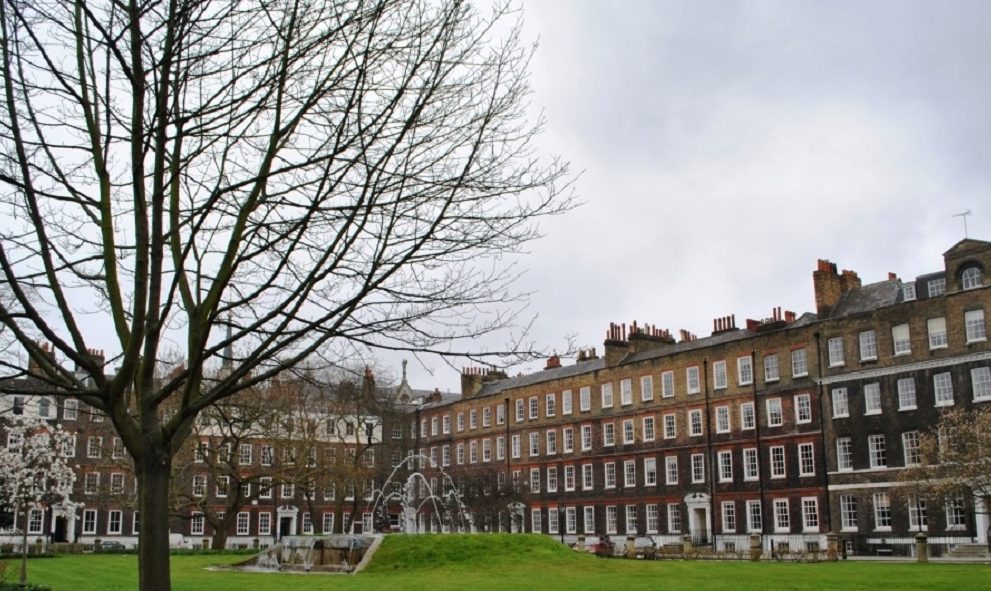 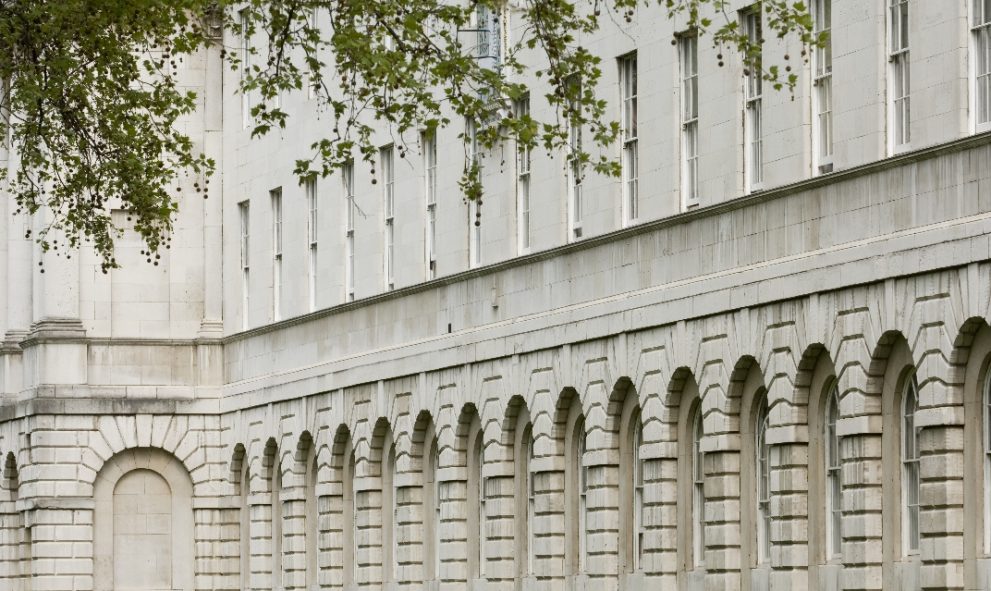 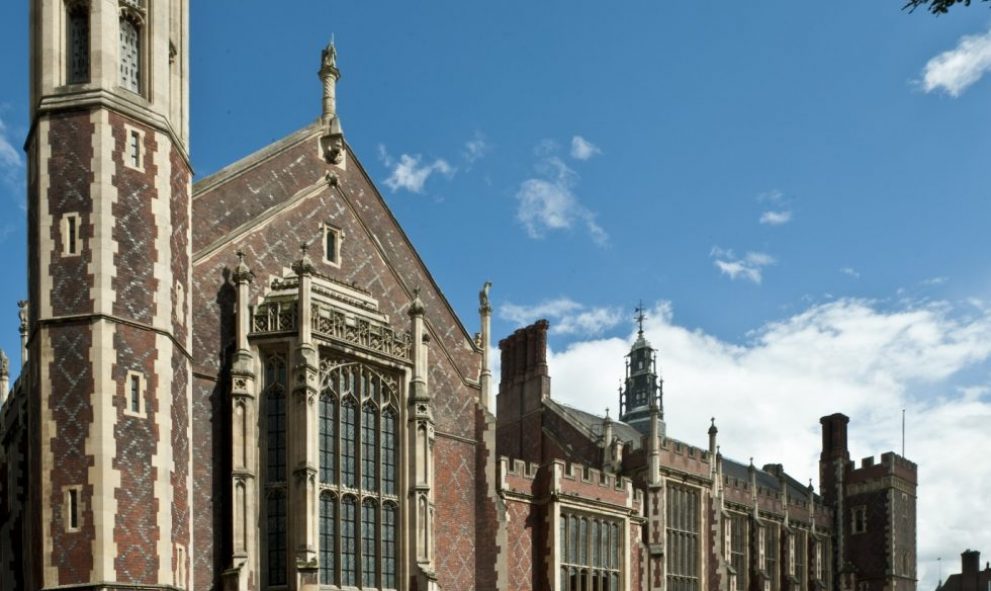 The Inn’s oldest surviving building is the Old Hall, which was built around 1490. It would have been used by benchers, barristers, and students of the Inn for eating, drinking, debating, and holding their revels. It was here that Sir Thomas More, who joined the Inn in 1496, would have spent much of his professional life.

The Old Hall has undergone various remodelling and additions since 1490, including being almost completely rebuilt in the 1920s as the building had become unsafe.  This work was done with great care, and retained as much of the original building as possible.  Some of the replacement linen fold panelling was even carved from sixteenth and seventeenth century oak that was sourced by the architects.

The relatively unusual survival of the Old Hall, in addition to the Great Hall, is probably due to the fact that the Old Hall was used as a courtroom from 1717, until the Royal Courts of Justice on the Strand opened in 1882. It was this use of the Old Hall during the nineteenth century that led it to be featured in Charles Dickens’ Bleak House.

The Old Hall has witnessed many events, the most notable probably being a visit paid to the Inn by Charles II in 1672. An account of this visit is recorded in the Inn’s ‘Golden book’, held in the Archive. The King dined in the Old Hall, along with his brother James, Duke of York, and numerous noblemen and courtiers of the day.

Following the building of the Old Hall, the Gatehouse was built during the years 1517 to 1521. The bricks used were dug and made within the Inn. The great oak doors date from 1564.

On entering via the old Gatehouse a collection of chambers known as ‘Old Buildings’ can be seen. These date from the late sixteenth to early seventeenth centuries, although these have also undergone several drastic remodels and renovations since they were originally built. 17 Old Buildings, for example, originally contained the kitchens for the Old Hall, including a once ‘great chimney’ that contained thirteen enormous hearths on which to cook the Inn’s food. This was completely removed in the 1840s.

The current Chapel was completed in 1623, replacing a smaller one. There is a small fragment of carving from the original chapel on display beside the current pulpit.

Like the Old Hall, the Chapel has undergone various extensions and remodelling, the largest being the addition of a fourth bay in the 1870s. The Chapel windows contain some beautiful seventeenth century stained glass. On the south side are windows in which the Inn itself is depicted (including the Chapel and Hall), alongside a representation of the City of London and Treasurer in 1623, accepting the keys for the Chapel from the builder.

Some of the windows include the arms of Treasurers of the Inn, and these date from 1680 and begin in the east window.

The Chapel has a distinctive Undercroft, where benchers were occasionally buried through the seventeenth and eighteenth centuries. It was also known in the eighteenth century as a place where mothers left their babies if they were unable to care for them. These foundling children, as they were known, were usually then cared for by the Inn, at least initially, and were given the surname Lincoln.

On 13 October 1915 a zeppelin bomb fell in Old Square and two Chapel windows were completely destroyed. During the Second World War the glass was removed, kept in safety, and replaced afterwards. The north wall of the Chapel shows some of the worst of the war damage with pock marks that continue right through the Undercroft to the opposite side on the south wall.

New Square was built between 1682 and 1693 on an area known as little Lincoln’s Inn Fields or Fickett’s Fields, which sat outside the original boundaries of the Inn. This led to various boundary disputes, and you can still see tablets on the walls of Nos 1 and 11 New Square, recording how the boundary disputes were settled. These buildings have undergone rebuilding and major refurbishments since their original construction.

You can see Treasurer’s plaques around the site recording various building works. A collection of these can be seen above the entrance to ‘Wildy’s gateway’, leading off from New Square.  These plaques are usually triangular in shape and contain three letters – a ‘T’ above two initials. The ‘T’ stands for ‘Treasurer’ and the initials are of the Treasurer in the year that work was completed Usually in between the T and the two initials is a date, which tells you when the work was done to the building.

In the 1770s the Inn began work on Stone Buildings. A design competition was put out by the Inn with finalist competition drawings coming from several architects, including Robert Adam. The Inn ultimately chose the designs of Robert Taylor.

2 Stone Buildings originally housed the Library, until it was moved to its current location in 1845, when the new Library opened.

The Great Hall and Library building was completed in 1845. It was designed by Philip Hardwick, who had also worked on Euston station and the Goldsmith’s Hall. The Library was later extended eastwards to the design of Sir George Gilbert Scott in 1872.

The Great Hall and Library were opened by Queen Victoria on 30 October 1845. It was a high profile event; covered in national papers with an extensive feature included in The Illustrated London News.

Queen Victoria also recorded the particulars of her visit in her diary, describing the Great Hall as ‘a very fine building’ and the Library as ‘a very handsome room where I was placed on a Throne, and received an address.’

Much of the life of the Inn centres round the Great Hall. It is here, four times a year, that the ceremony of calling students of the Inn to the Bar takes place. It is also where events take place as well as normal dining.

On the wall in the Great Hall, there are panels with painted coats of arms of former Treasurers. There are many paintings on display, and at the north end there is a very large fresco by George Frederick Watts.